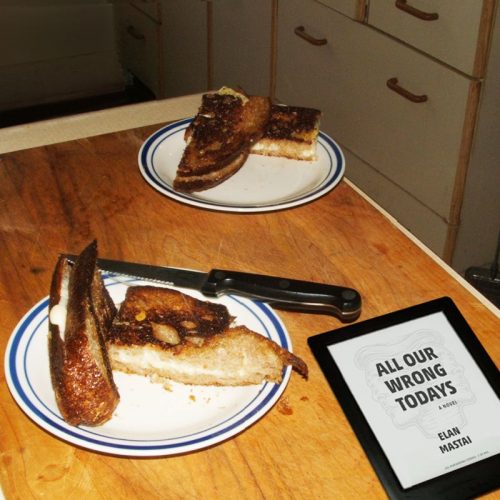 As I read books, because of the Novel Food event, I find myself making note of any specific references to food. I pay particular attention when reading books that I can’t put down.

All Our Wrong Todays by Elan Mastai is one of those books. I could not stop reading it. I neeeeeeeded to know what was going to happen next. Or before. Or beside.

Allow me to explain: The novel involves time travel…. It’s always with a little bit of reluctance that I start to read a time-travel book. And yet, I can never stop myself – even when the story is ridiculous.

But this particular time-travel book is anything but ridiculous; it is excellent! And, because it seems that Elan Mastai has had the same arguments and questions about the impossibility of time travelling that I have, the book only started making my brain hurt around chapter 118. 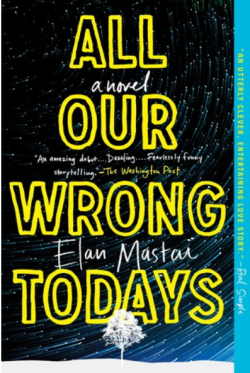 Of course I couldn’t stop reading at that point, any more than I could when I read the following at the beginning of the book:

So, the thing is, I come from the world we were supposed to have.
That means nothing to you, obviously, because you live here, in the crappy world we do have. But it never should’ve turned out like this. And it’s all my fault.

There are a few sections throughout the novel that fall into the standard Sci-fi parallel dimension explanations that are laced with mathematical formulae. (I confess that I kind of skimmed those parts….) Mostly, it is just a thrilling tale.

Food is not really a central theme in this mind-bending and often beautifully written book. (Well, perhaps it’s not mind-bending for everyone. But anything that involves time travel tends to hurt my head.)

There are repeated mentions of lemon tarts and grilled cheese sandwiches though.

I do love both of those things. But I have a weak spot for grilled cheese sandwiches. I always have.

When I was growing up, Dad (a bridges and structures engineer) would occasionally ask if any of us wanted to go with him on a day trip to inspect a railway bridge. Generally, we would say no. Not usually very gracefully either. What could be duller than tramping up and down an embankment somewhere in the wilderness to stare at a railway bridge?

(In retrospect, I cannot believe I ever thought this was dull!)

However, if Dad said he was going to Magnolia Bridge, I always jumped at the chance to go with him. I even deigned to stare at the bridge. Why? Because afterward, we would stop at a diner in Magnolia for grilled cheese sandwiches. Just the two of us, sitting at a formica table with two glasses of milk and two small plates, each adorned with a perfectly golden, still too hot to eat, grilled cheese sandwich, artfully cut diagonally in half. With a frilly slice of pickle on the side of each plate.

I have to admit that most of the thrill was because we were eating a.) at a restaurant, and b.) being served what I considered to be forbidden food: processed cheese on store-bought bread. We never had processed cheese in the house! And Mum made all our bread. But I don’t remember her ever making grilled cheese sandwiches.

Don’t get me wrong. We weren’t even remotely deprived and I knew it. Also, I loved Mum’s bread! One of my favourite things to do, when I got home from school, was to cut a thick slice from a loaf she had made that morning, slather it with too much butter (can there be too much butter?) and carefully arrange paper thin slices of aged cheddar cheese on top. What bliss!!

Ha! I had no idea then how fortunate I was. And. Now that I’m no longer 8 or 9 years old, processed cheese has lost its cachet. So has store-bought bread….

Here is what triggered those happy Magnolia Bridge memories, and the reason that I suddenly neeeeeeded to have grilled cheese sandwiches again:

When I was born, my mother planted a lemon tree on their property and once a year she would make lemon tarts, her grandmother’s recipe, for my birthday. That tree, thirty-two years old, same as me, was just strong enough to stop the hover car from smashing right through the large window of my father’s study, where he was considering matters of lofty import and absentmindedly eating the grilled cheese sandwich that my mother had prepared for him as she made herself a mug of coffee to drink while sitting out in the sunshine to read a chapter of Great Expectations before it was time to do some other incredibly thoughtful routine thing that made my father’s life so pleasant and that he would realize she’d done for him for more than thirty years only once she was gone.

The time I ran away from home for nineteen days, this is what I wanted. Instead, my mother made me a grilled cheese sandwich and refused to discuss any of it. My father wandered into the kitchen and, without even acknowledging I was back, picked up the sandwich, assuming it was for him, and trotted back to his study to eat it behind the heavy closed door. My mother cried and I held her and apologized over and over.

Goddamn it, I don’t want to but I can’t help thinking about my father. And what it felt like for him when my mother died. Because of course I never asked.
I remember, a week after her death, finding a dozen grilled cheese sandwiches discarded on their kitchen counter with a single bite taken out of each one. I tossed them in the organic dissolution module and shook my head at my father’s self-absorption—he can unravel the mysteries of time travel but he can’t work the food synthesizer.
Now I understand. It wasn’t waste. It was longing. He was trying to re-create a meal his wife made him for thirty years. But the machine couldn’t get the flavor right. And so something as banal as a sandwich becomes fraught with sadness.

T made our grilled cheese sandwiches by putting 2 or 3 thin slices of Swiss cheese between 2 not so thin slices of light rye with red miso Tartine variation, and frying them in butter.

Oops. We forgot the pickle. 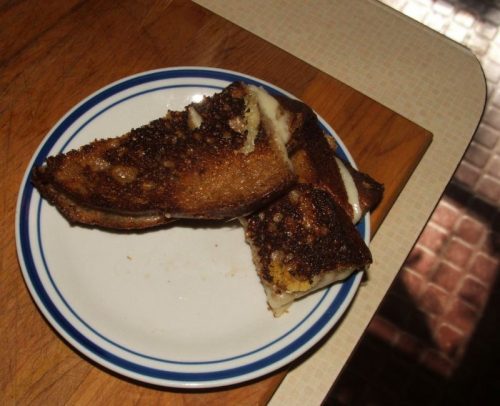 Still, even without the pickle, the sandwiches were perfect. Every bite savoured. None wasted.

I almost considered of manipulating T into making lemon ersatz-meringue pie, and/or to turn Shaker lemon pie into lemon tarts to be featured for this event. Here’s why:

My mom comes out of the kitchen with an antique porcelain platter that belonged to her grandmother, the border an azure geometric pattern laced with gold filigree.
On it are a dozen lemon tarts.
“I made your favorite,” my mom says.
[…]
“It’s my grandmother’s recipe,” my mom says. “I make them every year for John’s birthday. Right before he turned five he announced he hated birthday cake . . .”
[…]
I pick up a lemon tart. It tastes the same as the ones from my world. Collapsing the sensory boundary between realities is too much for any pastry to bear. I reach for the wine bottle. And I drink.

Unsurprisingly, as far as I can tell, I am the only one so far to have featured Elan Mastai’s “All Our Wrong Todays” in a post for Novel Food. 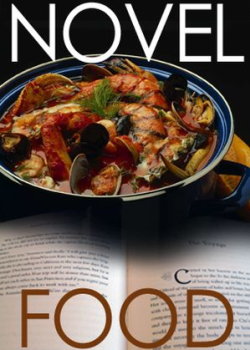 Adam Gopnik, “Cooked Books: Real Food from Fictional Recipes”, New Yorker, 2 April 2007
And before we know it, spring is around the corner. […] It also means it is time to launch the 38th edition of the culinary/literary event Novel Food, which is a voyage of literary discovery and a delightful party featuring literary-inspired dishes contributed by event’s participants.

For more information on how to participate, please see Novel Food #38.

Simona has also provided roundups of all previous editions of Novel Food.
Edit 27 March 2020: Here is the round up for this latest round of Novel Food: Novel Food #38: the finale (readings and recipes)

Grilled Cheese Variation
T invented the Roncesvalles Reuben – it’s similar to an actual Reuben, but instead of corned beef, it’s made with Polish smoked ham and kapusta kiszona (Polish Sauerkraut), purchased from one of the Polish delis on Roncesvalles and Swiss-like cheese – often purchased from the same Polish delis. Usually we make the sandwiches with homemade rye bread, but we didn’t have any rye bread on hand on Pi Day 2020. We had to make do with our regular Tartine wheat bread.

Years ago, when we first reported making these sandwiches in a newsgroup on UseNet (remember those days?), there was an outraged reply schooling us that “a Reuben sandwich bloody well doesn’t have ham!” Imagine how apoplectic this person would be now, to learn that we made the sandwiches on not-rye bread! I suppose it’s wrong of us to laugh at his indignant discomfort, isn’t it? 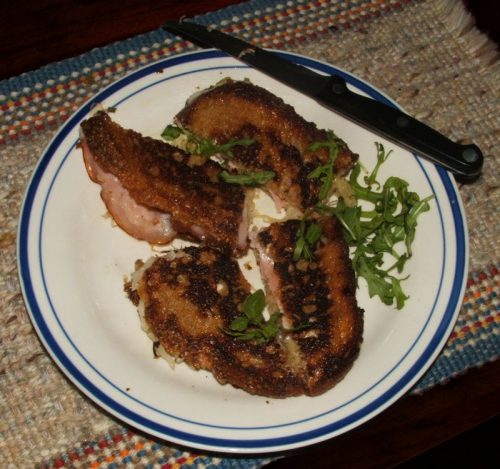 Let’s briefly play the Glad Game: With the drastic global need for Social Physical Distancing , there is even more time for reading right now. Please excuse me as I get back to my current book, “The Mistress of Spices” by Chitra Banerjee Divakaruni.

edit 18:49: My sister just pointed out the we should be using the phrase “Physical Distancing” rather than “Social Distancing”. Quite right. Let’s change the phrase.

2 responses to “Grilled Cheese Sandwiches inspired by “All Our Wrong Todays” (Novel Food No.38)”