summary: recipe for grilled red peppers and farmers’ market oyster mushrooms on salad with a simple vinaigrette; thyme in the garden; information about “Two For Tuesdays! (Real Food)“; (click on images to see larger views and more photos) 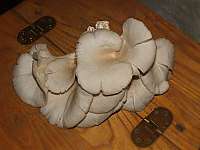 I know I’ve already droned on about our weekly farmers’ market that is set up just a block away every Monday evening. But please indulge me as I drone on a little more.

One of the fellows who grows exquisite salad greens, including roquette (aka arugula) is also selling all kinds of mushrooms that his neighbour is growing in his barn. Last week, we couldn’t resist buying this beautiful bunch of oyster mushrooms.

Sure, it wasn’t cheap at $10 a pound but I decided that we’re worth it. Not to mention that we were going to be having a romantic splash out dinner in the garden. I thought these oyster mushrooms would be perfect for our appetizer.

This particular clump of mushrooms was half a pound. It’s like a work of art, isn’t it? (Imagine paying only $5 for something so priceless.) 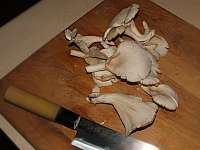 It was with a little reluctance that we began to chop the mushroom apart. First T cut away the big stem end (we’re drying the bottom section to put into stock). Then he very coarsely chopped the mushrooms into smaller pieces. It almost seemed a shame to spoil its looks. But sometimes great sacrifices must be made in the name of art. 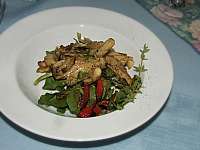 But it can’t be said enough; I am married to the most brilliant man. Suddenly, as I sat down at the table with this placed in front of me, it didn’t seem quite so tragic that the mushrooms were cut up. I mean really, just look at this dish!! A work of art becomes a new work of art….

When we first started talking about this, we WERE going to put the mushrooms onto a bed of roquette. But we didn’t see any decent roquette at our various produce stores. (I was so entranced by the oyster mushrooms that I neglected to get roquette when I was at the farmers’ market.) Happily, we found some lovely watercress to use instead.

And then I thought it would be nice to add some colour. We had grilled a ton of red, yellow and orange peppers the day before (our vegetable store sells their rejected peppers for a fraction of the price of their regular peppers; we got 4 HUGE peppers for $1. All that was wrong with them was that one had a small section of slightly wrinkled skin and the others had tiny blemishes). So I sliced some of the red pepper to add to the water cress. 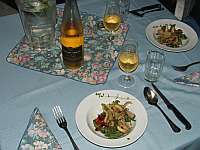 As T was grilling the mushrooms, I strolled into the garden to snip some thyme. It was very difficult to keep my promise of getting plain thyme only. The lemon thyme was lush and beckoning to me. So was the silver thyme. But I was obedient and only trimmed some branches of regular thyme. Dark green aromatic thyme. I love the smell of thyme!

And then the lemon thyme shouted to me as I walked away, so I came back and snipped a few branches of it too to use as garnish for our main course of grilled salmon with green peppercorn mayonnaise. (Remind me to rave about that too.)

This was a truly brilliant first course for a festive dinner. We were a little worried that the perfectly chilled Jackson Triggs Riesling (2004) we poured might be too sweet (even though the label says “Dry Riesling”) for the mushrooms but it was lovely.

What an evening!! We can never believe our good fortune to be able to dine outside under our canopy of lacy locust tree leaves, listening to the music of the birds singing, the neighbourhood children playing and other neighbours in their gardens chatting quietly, with the occasional interruption of some laughter or the tinny “deedly dee dee do do dooo…” from a distant ice cream truck.

Here’s what we did to make this fabulous appetizer:

Salad with Grilled Mushrooms and Peppers Garnished with Thyme

Remove from heat and serve immediately or set aside to serve at room temperature.

Just before serving, drizzle the vinaigrette over salad greens and toss.

» With regards to the measurements for salad dressing: My father worked with an Italian man whose father had handed down the perfect salad dressing recipe to him (father to son kind of thing for generations). As I recall, the recipe goes as follows:

While salad dressing does keep, it’s really best to make just enough for that day.

» The skin of the peppers is edible but some people find it bitter and/or difficult to chew. If you don’t like the skin, peel it away after charring the peppers. (It’s easy to do – once an edge of skin is pulled away, it’s rather like peeling a banana.)

» Lots of peppers can be cooked at once and stored in the fridge for up to a week. They’re great in sandwiches as well as salads.

» If watercress is unavailable, any other leafy greens will work. I still want to try this with roquette but T is adamant that we use watercress with this particular salad.

This event was created by Alex (A Moderate Life) with the idea that each “Two for Tuesday” post would contain two things (two recipes, two links, two variations on a theme… as long as the post is about real food. Heather (girlichef), Beth (bethstedman.com), Michelle (Health Food Lover), Christy (Frugality and Crunchiness with Christy) and ButterPoweredBike(Rendering Lard) have joined forces to co-host the event. Heather wrote:

For links to the other “Two for Tuesdays (Real Food)” hosts and complete details on how to participate in the weekly event, please read the following:

At the same time as I got the oyster mushrooms, I bought methi (fenugreek greens) from the fellow who was selling red onions a couple of weeks ago. Remind me to report on the fantastic Indian-style feast we had using those greens.