summary: grilled shrimps in Pernod; garnishing with tarragon; SAVEUR’s definition of grilling vs. barbecue; stir-frying spinach; how to ensure the spinach doesn’t get grey and slimy; (click on image to see larger views and more photos)

At last it’s barbecue season!! Which means we have fresh herbs growing in the garden. I’m absolutely thrilled that our tarragon not only survived the winter but is thriving enough that we can use largish sprigs as garnish.

We adore tarragon!! We love its sharp, almost hot, licorice flavour and how it numbs the tongue. 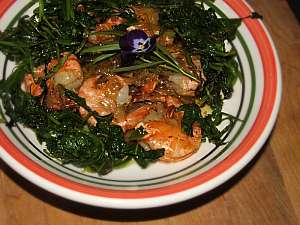 In the morning, just before I went to knead dough, we were talking about the fact that we would be baking the bread on the barbecue that night and discussing what we should have with it. It HAD to be something that would go well with tarragon.

And we hit on it: Shrimp! Grilled shrimp! In Pernod Sauce!

And then we turned to what vegetable to have with the shrimp. Ideally, we’d have sugar snap peas. But how could we justify that when we had a huge bunch of spinach in the fridge?

T is brilliant and suggested very lightly stir-frying the spinach so it would still have some texture. Because there’s nothing worse than slimy spinach.

How do we achieve non-slimy spinach that doesn’t turn grey-green? We “pre-cook” the spinach with salt. It’s the only way to go with spinach that is to be cooked. The spinach remains green and holds it’s shape. It also keeps for much longer in the fridge.

Sometime after lunch, T took a break to rattle around in the kitchen making the Pernod Sauce. Oh what a wonderful smell was emanating from the kitchen!! Even now as I’m remembering, I’m having to wipe drool off the keyboard.

I’m always surprised that I love Pernod Sauce so much. Under normal circumstances, I can’t stand licorice (unless it’s in tarragon or fennel…). I loathe Pernod on its own. I’d rather drink a big glass of inferior vinegar than even the tiniest glass of Pernod. But there’s just something about Pernod when it’s mixed with butter and garlic or onions that suddenly makes it not just palatable but delectable. Pernod Sauce always tastes like more.

After the evening news was done, we sat outside, watching the bees happily visiting flower after flower, listening to the neighbourhood and baked the bread on the barbecue.

Once the bread was done, T put the shrimp into the barbecue wok with a brief whoosh of flames from below as the oil on the shrimp dripped down and hit the bottom of the barbecue. In no time, the shrimps were ready.

Back into the kitchen for a moment to quickly stir-fry the spinach and heat up the already made Pernod sauce. T sliced the bread, tossed the shrimp into the pernod sauce, and laid it on the beds of spinach in each bowl. 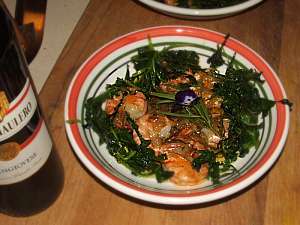 We garnished each bowl with a sprig of tarragon and a viola. Ideally, we would have served our favourite Argentinian Misterio rosé with the shrimp. But the liquor store didn’t have any on the shelves that day. So we made do with our currant house wine, Casal Thaulero Sangiovese; it was a very good compromise.

WHAT a fabulous dinner we had.

Have I mentioned before how much I love summer?

This month, SAVEUR magazine has devoted almost its entire issue on Barbecue (the subheading of the issue is “BBQNation”). As always, there are some great articles about barbecue, as well as this handy definition of the difference between barbecuing and grilling:

Though the terms are often used interchangeably, what separates barbecuing from grilling is low, slow heat and smoke. While grilling requires contact between food and flame, barbecue relies on indirect cooking – putting distance between the coals and the meat, and allowing radiant heat to cook the meat inside a closed chamber.

5 responses to “grilled shrimps on a bed of spinach”