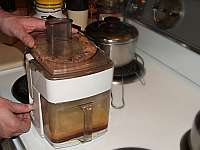 I mentioned yesterday that on the weekend we purchased this juicer for $2 (yes, once again; that’s TWO DOLLARS).

When we got home, we immediately made carrot/ginger juice. Because that’s what we had in the fridge. The ginger was a good addition. It masked the decided carrot flavour. I decreed that we had to go out immediately to get some fruit.

I far prefer fruit juice. T, on the other hand, prefers vegetable juice. Which makes zero sense to me. This is the same man who complains bitterly if I suggest that we should have more than two vegetables for dinner.

A typical conversation just before dinner:

he: Did you wash the vegetable(s)?

me: Yes, they’re on the counter.

he: I’m not eating half of those!!

me: (quiet sigh) I’ll eat whatever you don’t.

Now, don’t get the wrong impression. It’s not that T won’t eat vegetables. He just doesn’t like as many vegetables as I do. Unless we are having something like stir-fried broccoli with garlic and anchovies. Then we have to make sure to cut enough broccoli for at least 4 people (even though there are only 2 of us) and then we STILL argue and whine that the other person got more. Or palak paneer. It’s better to just get TWO bunches of spinach for the two of us rather than be disappointed with such a meager looking half portion. It’s such bad form to constantly look over longingly at the other plate, wondering if there mightn’t have been some short-changing.

But that’s another story. Let me get back to the juicer.

We used to have a Braun juicer. We used it all the time. But it was annoyingly large. There was no good place to store it. Very soon after purchasing it, the spout had to be attached with duct tape. It was a bit of a drag to clean.

And so we gave it away.

But we were always a little sorry not to have our juicer.

And now we have one again. One that fits on the counter behind the knife holder – without taking up too much space. And it’s way easier to clean than the Braun. Yay!! 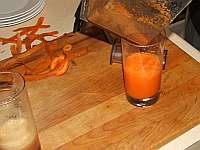 So far, we have made:

We keep forgetting to stir in a bit of the pulp. That way we will get the fibre benefits too.

So! What shall we try juicing next? (No, T, NOT cantaloupe. Eewwwwwwwwwww!)

And speaking of happiness… Wow! I am thrilled to be the recipient of an award!! The

was presented to me by Katie (Thyme for Cooking) which she received from Ruth (Once upon a feast). Ah, so you see; there’s a small catch in getting the award.

The instructions: “list 10 things that make you happy, try to do at least one of them today, and tag 10 bloggers who brighten your day“.

If I had Mum’s spider tea cup, getting to drink tea out of the spider cup would be first on the list of things that make me happy. We NEVER got to drink out of the spider cup, except on our birthdays, when it was carefully brought out of the glass doored cabinet and placed on the table for all to admire. Alas, I have no photo of the beautiful spider cup. Note to self: Ask Mum or Dad to send a photo.

So, here are the 10 things that make me happy (in haphazard order):

And 10 bloggers who brighten my day (in alphabetical order): 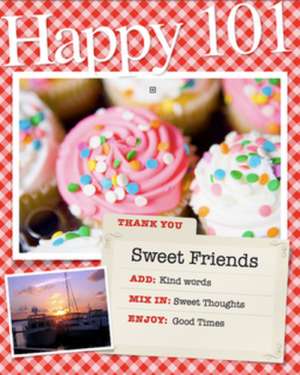 I know; some of you have already received this award. If this is your first time to receive this award (or you’ve received it already and want to do it again), please prepare your own lists of 10 things that make you happy and 10 bloggers who brighten your day. If you want. In your own time. Or not. Whatever makes you happiest.

(Being the mean sour sort of person I am, I must go on record to say what I really think of the award image. It’s just a little bit cute and care-bearish, don’t you think?

However, allow me to reiterate, I am very happy to be a recipient.)

Ha!!! Is the joke on us? It looks like our new juicer has been recalled officially.

Well, fiddly dee dee. I don’t care. We’re NOT going to stop using it! (Hey!! Should we try sending it in to get the replacement? :-))

2 responses to “Happiness is… a new (to us) juicer”