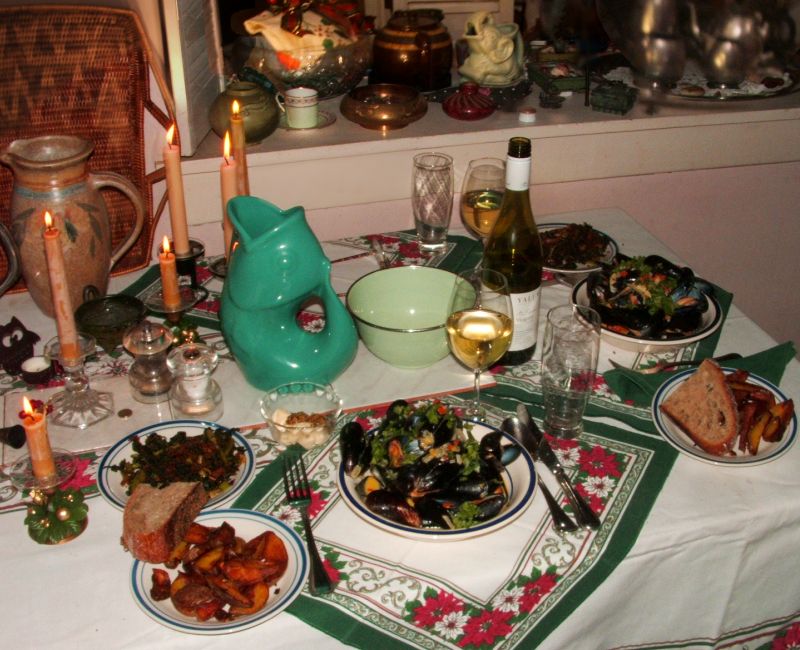 We had a wonderful New Year’s Eve!

Yesterday morning, after packing up Tartine bread, cherry snowballs made with Persian dried sour cherries, cheese biscuits and pecan puffs, we put on all our layers and hats and scarves and mittens and headed out into the cold (and don’t let your Winnipeg and/or Edmonton and/or Alaskan experiences of what real cold is confuse you – it was REALLY cold here in Toronto) and trekked along the snow-packed sidewalks up to miss the streetcar and wait for about 10 minutes, jumping up and down to try to keep our feet warm. Then onto the rather elderly streetcar, that quickly filled up with people heading to work or play (every time the door opened, a gale-force wind whipped past our feet), to go across the city to our long-time friends W and G for our annual Cheese Day. Both W and G’s sons were in town for Christmas and J and G had gone to St. Lawrence Market to get a selection of cheeses, pate, cream cheese, bagels and smoked salmon. 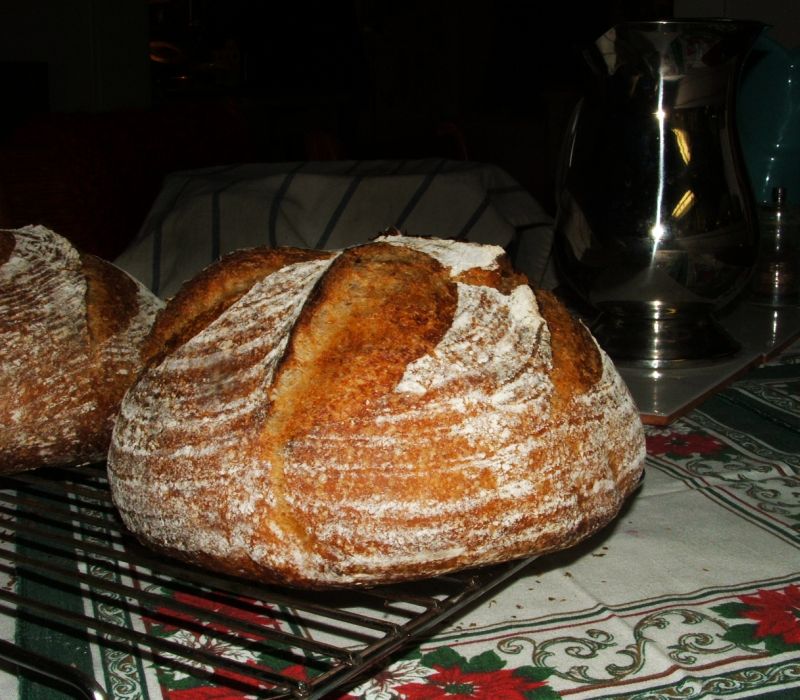 As usual, there were zillions of cheeses. The really outstanding ones were Asiago, aged cheddar, and Calvados-washed Camembert (like the best creamy blue cheese you’ve ever had). We sat by the fire in their living room, chatting and reminiscing happily.

Then out we ventured into the coooooold afternoon to take a newer (and warmer) streetcar home again – going via King Street and collecting all the people who were headed home from work, stopping at the fish store on Roncesvalles to pick up the PEI mussels we had put on order for our dinner.

And as I read to him (Rachel Roddy’s lovely cookbook “Our Kitchen in Rome”), T made the most fabulous dinner! We had mussels cooked in cream, onions, carrots and then at the last minute, Totton squeezed in what turned out to be intensely delicious juice from some frightening-looking, shrivelled up Navel oranges we found in the cold green section by the back door. How could we not, remembering how fantastic Jamie Schler’s Mussels were? 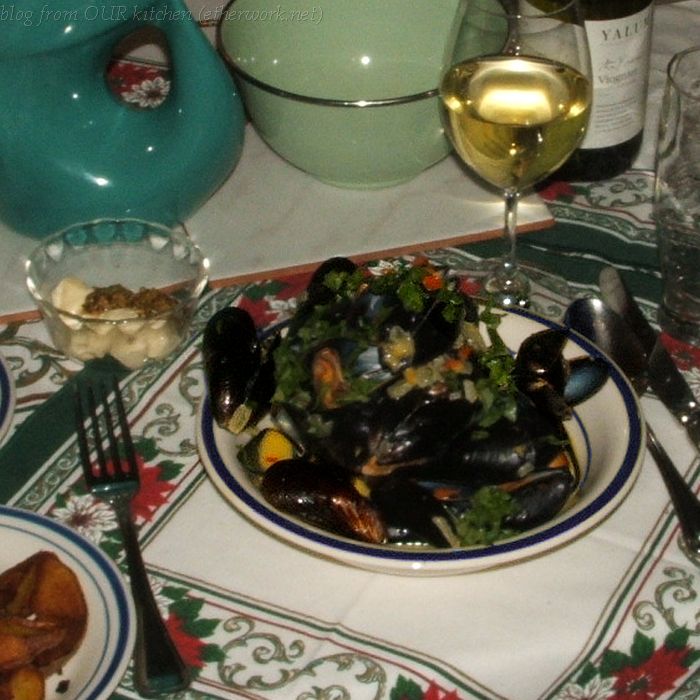 T also stir-fried curly kale and tossed it with buttery toasted bread crumbs and chopped bacon. We ate the mussels with oven-roasted potatoes (sort of like frites) and a bit of bread left over from the other day. We toasted 2018 early with the Yalumba white wine we were drinking and headed up to try to watch some of the TV coverage. Which came from Niagara Falls or New York City. Because Toronto cancelled most of their party in Nathan Phillips Square. Apparently, it was too cold. Apparently, Torontonians aren’t very Canadian….

We fell asleep just around midnight – I considered banging pots but didn’t want to get out from under the nice warm covers. Besides, the furry black fiened was curled up on the quilt over my feet. I didn’t want to wake him and then wonder what on earth he was doing if he raced and skittered off.

This morning, for breakfast, we began with grapefruit fizz (remind me to rave more about this) and T’s plum pie with sour cream – that was going to be last night’s dessert. 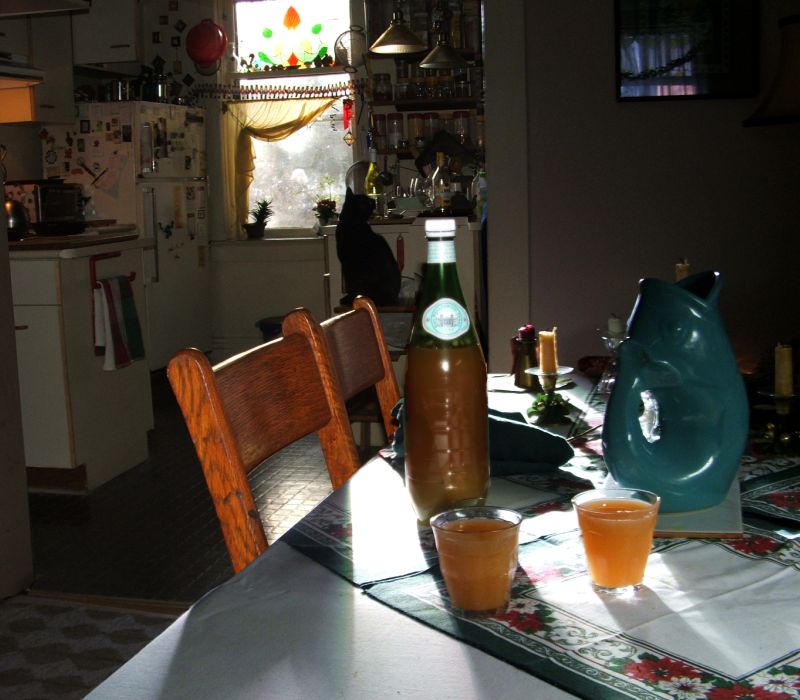 Tonight, we will open up one of the loaves of bread I made two days ago (we took one to W and G) to have with lentil soup and more curly kale.

I cannot believe that I have never raved about our lentil soup! It is easily the most brilliant soup in the world. While we are not following Rachel Roddy’s lead to eat the soup with pasta, we still think that our lentil soup will bring us great fortune. After all, it hasn’t failed us yet.

Here’s hoping that your New Year’s Eve and Day feasts were/are filled with riches and that you too will be living like kings.

From the coastal American South to Europe, people eat green leafy veggies—including kale, collards and cabbage—on New Year’s Day because of their color and appearance, which resembles paper cash. Belief has it, the more you eat, the more prosperous you’ll be (and the healthier, too!). […]
A popular New Year’s meal in Italy is Cotechino con Lenticchie (green lentils with sausage) because of the legume’s greenish color and coin-like appearance. Deeper into the myth: When cooked, lentils plump with water, symbolizing growing wealth. Lentils are also considered good luck in Hungary, where they’re preferred in a soup.

– Brynn Mannino, 10 Good Luck Foods for the New Year, Woman’s Day
In Rome, they say those who eat lentils and grapes at New Year conta quatrini tutto l’anno (count coins all year long). It is the magic of their form. Shaped (a bit) like coins, lentils are an augury of wealth and happiness: the more you eat, the better your fortune the following year. It is a tradition upheld in much of the country, although different regions have different ways of eating lentils and have different accompaniments – particularly good are the fat cotechino sausages of the north.

– Rachel Roddy, Rachel Roddy’s recipes for four new year treats inspired by Italy, The Guardian
It’s […] good luck if you eat it on New Year’s Eve, when the more money-shaped lentils you consume, the more fortune you will have the following year.

– Rachel Roddy, Pasta e Lenticchie, My Kitchen in Rome, p.107
Words and excuses tumbled from my mouth! “It’s midnight! We’ve been eating and drinking and drinking and eating since six o clock! I can’t possibly eat another…..” “But you must” I was told earnestly. “It’s the lentils you see, like little coins, they’ll bring you luck. They’re delicious too. Mangia.”
They were indeed, properly delicious, soft, earthy little orbs. Full flavoured too – clearly cooked with a fearless quality of guanciale – and a perfect foil for the rich, glutenous Cotechino. For lunch on New Years Day the rest of the lentils were reheated with a little broth, fortified with pasta and served with a glug of raw olive oil and a blizzard of pecorino romano. Riches of the monetary kind may not have been forthcoming that particular year, but at least I’d understood.