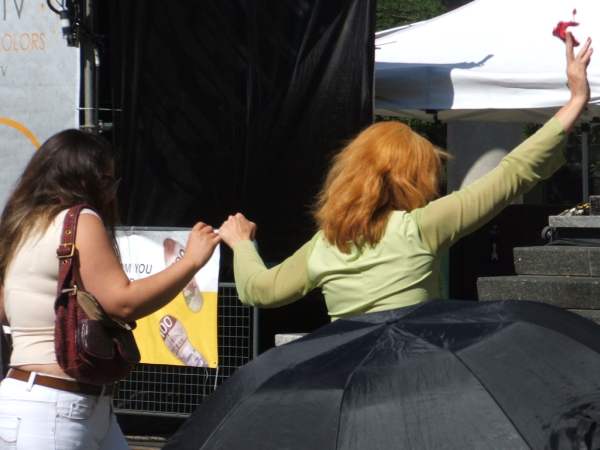 We rode our bikes downtown yesterday: Sunday of the August long weekend – the same weekend that Caribana festivities were going on on Toronto Island – and were amazed to see that Dundas Square was full of all things Turkish. There was a man wearing a red fez, a red costume embroidered with gold thread and leather belt filled with drinking cups, walking around with a samovar of lemonade.

And there were stall after stall of various foods. I tried börek, a pastry filled with cheese and some sort of green leaf (the women at the table were unable to tell me what the leaf was… parsley?? spinach???). It tasted slightly lemony and was quite good. Personally, I think it would have been better right out of the oven but don’t know if that would be a traditional way of serving it or not. Of course, with his sweet tooth, T had to try a sweet pastry that looked like the Indian sweet, jalebi.

And then we got completely distracted watching some women rolling out the dough for gözleme, a delicious stuffed bread similar to paratha. I think we must have spent at least half an hour watching…

Naturally, we didn’t have the camera. 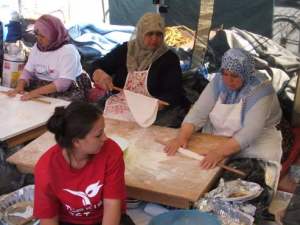 So we rode home to get it.

And rode back again to take pictures of the crowds and many pictures of ladies making gözleme.

Each lady first patted a ball of dough into a disc then rolled it out into a round, pulling tiny bits of flour (all-purpose??) to stop the dough from sticking as they rolled. Once the disc was already relatively large and thin, the lady would roll about half of the disc around the pin and roll it back and forth to thin the disc further. (We should have taken a video!!)

Once the dough was rolled, it was handed over to one of two ladies. One was filling the discs with cheese and parsley and the other was filling them with a mixture of potatoes and something that turned it pink coloured. I’m guessing paprika, or perhaps tomato or beet. 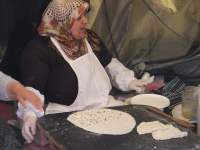 It was very difficult to ask; anyone who knew the answer didn’t really speak English very well or was too shy to speak. One lady in line just smiled and nodded and smiled when I asked her if she knew how to make these. At last she gasped out “Po – ta – to” and smiled even more broadly.

One thing I did get clear though was that the dough was made simply from flour, water, salt and perhaps a little oil. And as far as I can tell, the flour was all-purpose – although the flour on the rolling boards was quite yellow coloured and I wonder if it wasn’t semolina. (Very similar to paratha dough!)

After the discs were filled, they were folded in half to look like crescents and placed on a hot griddle to cook. And just before serving, the bread was brushed with melted butter. (Did we get photos of all that?! You must be joking….)

The gözleme was delicious (we had the cheese and parsley stuffing) … just hot off the griddle and brushed with melted butter. The cheese appeared to be feta and had a salty lemony flavour. I did mention that it was delicious?

Have any of you made gözleme? And if so, what recipe do you use?

(click on images to many more photographs of women making gözleme)

7 responses to “Have you ever tried gözleme?”