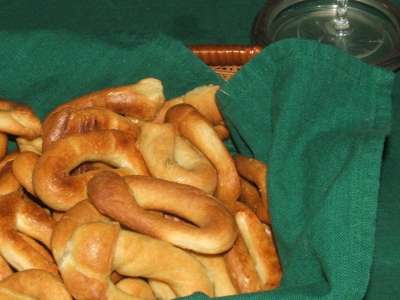 I was so happy that December’s bread was not specifically “Christmas” bread. I was terrified that it was going to be Panettone. (I know the Babes are crazy enough to suggest making it.)

So I couldn’t have been happier to be making these. I LOVE savoury bread!!

Of course, these are more like bread sticks than bread. And they ARE delicious!

The other great thing about taralli is that they are not remotely like Panettone in terms of the labour required. They can be baked the same day as they are made (in fact, not long after they’ve been mixed).

The only difficulty I had was to know just how much water to add. I might have erred on the overly wet side. The dough I ended up with wasn’t exactly stiff. (There is a recipe for Taralli in Maggie Glezer’s “Artisan Bread Across America” and she describes the dough as being incredibly stiff) Hmmm, the dough I ended up with could hardly be described as incredibly stiff. It was more like a firmish pizza dough.

The recipe we followed suggested using eggs OR white wine. I really liked the idea of using white wine rather than the eggs. (I wonder if this made the taralli crispier?)

Also, the recipe called for 12.5 gm fresh yeast. Ah, the yeast equivalent: yet another one of my pet peeves… but don’t let me go on about that again; I’ve ranted about yeast equivalents quite enough already.

Using my ridiculous calculator that takes into account the various formulae I came across in my books and on the internet, the amount of active dry yeast is anywhere between 2 and 8.13gms.

Because there is no sugar in the dough to stall the yeast, I decided to go with Carol Field’s formula and use 5 gm active dry yeast in this recipe.

So into the kitchen I skipped to get started. I happily mixed flour, olive oil and wine, then added the rehydrated yeast, then sloshed in extra water (oops!! did I add too much???) and happily kneaded the dough until it was smooth.

Only then did I notice that I was supposed to shape the taralli right away and bake them in about 30 minutes.

Oh oh. T needed the kitchen. And there I was using up ALL the counter space. And then some.

I begged for 15 minutes reprieve and frantically rolled out rope after rope. The dough kept springing back on itself. It seemed to take forever.

But of course, it didn’t. The rings were made in no time. I covered them, cleared the counters and raked the kitchen to make space for T.

He, of course, was completely calm and efficient and was finished preparations for that night’s dinner just in time for me to start parboiling the taralli.

Yes!!! Taralli are parboiled like bagels before being baked.

I LOVE the way they sink like stones in the simmering water then suddenly pop up to the top. My bagels have NEVER done this.

Haha! I want to make taralli all the time now, just to see them pop up to the top of the water!

And into the oven they went. Wow!! How quick and easy was that? 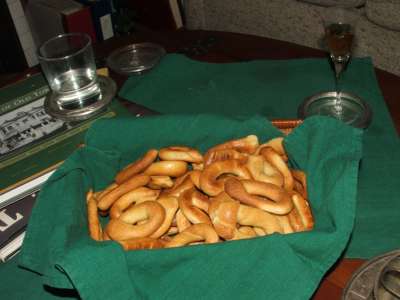 And how do they taste? Mmmmm!!! They could use a little more salt maybe but they’re lovely. I can certainly see why Ilva and her family are addicted to them.

They will be fabulous with predinner drinks and various pates on Christmas Eve! (If we don’t finish them first… I’d better put them in the freezer right away!)

Of course, I know that you will want to make taralli too! Here’s the recipe we were to have followed.

Before storing, check that the taralli are crisp. Ilva says they should NOT be soft in the middle. Store the taralli in an air tight container or freeze them until time to serve.

1.) White Wine: The recipe calls for using either white wine or an egg. We chose to use inexpensive Argentinian FuZion chenin/chardonnay.

2.) Water Tap water is fine to use – just make sure that it has stood for at least 12 hours so that the chlorine has dissipated. Under no circumstances should you use water from the hot water tap. Heat the water in a kettle or microwave and add cold water until it is the correct temperature, (use the baby bottle test on the back of your wrist – your fingers have no idea of temperature!) Or you can use a thermometer. The temperature should be BELOW 120F because yeast begins to die when the temperature is higher than 120F.

Natashya chose to use more white wine instead of additional water. Next time this is what I plan to do as well. I like the idea of the slight acidity the wine will add to the dough.

3.) Kosher Salt The recipe simply called for salt. I used kosher salt and forgot that because it is coarser grind than table salt, I should have added extra. According to Gourmet Sleuth, I should have added 3 gm. (This is another reason that I’m starting to prefer measurements by weight rather than volume.)

This is a red letter day!!! I actually managed to make the December bread two days before the BBB deadline AND here I am posting on time! Before midnight even! 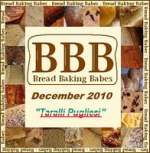 Ilva (Lucullian Delights) is the host of the December 2010’s Bread Baking Babes’ task. She wrote:

I am proposing an Apulian bread that me and my family are crazy about especially when made with peperoncino! Taralli is what we are going to bake in December and I hope you will like them as much as I do. […] [T]his recipe calls for fennel seeds but do try the peperoncino version where you add peperoncino/chili oil to the dough.

Rats!! I completely forgot about using peperoncino! Now I HAVE to make Taralli again!

If you’d like to bake along (of course you do!!) and receive a Baking Buddy Badge to display on your site, bake the taralli and post about them before the 29 December 2010.

The BBBabes’ anniversary is coming up in February and we’d like YOU to pick the Anniversary Bread recipe for February 2011.

Scour your bread-baking cookbooks, recipe boxes and bread-baking sites to make your choice. We’re asking you to submit pick the BBB bread we’ll bake for that month.

Please remember to look at my annual Advent calendar (don’t even THINK about peeking ahead).