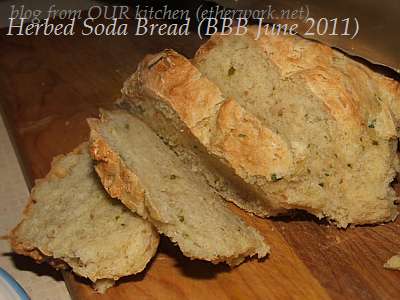 I’ve heard about Soda Bread. And how dry it is. How it catches in your throat like sand.

But the other BBBabes who made this particular recipe earlier than I assured me that it’s not at all dry. So, in BBBabe fashion, I wrote the recipe down and in I plunged.

Hmmm, maybe I should be smart and actually bake a Babe bread a couple of days before the deadline. I almost bought buttermilk today but then decided to be a bad babe and just use plain yoghurt instead. But it’s a little late in the day to be starting to bake, isn’t? Fiddle-dee-dee. I’ll start tomorrow.

(sung to the tune of “Allouette”)

I WAS going to make this bread this morning. But it was beautiful outside so we went for a bikeride. And now I’m realizing that it won’t go well with tonight’s dinner of pasta with sausage, chilis and broccoli. So I’ll make it tomorrow.

But I’m still planning on using yoghurt rather than buttermilk. I usually substitute yoghurt for buttermilk measure for measure. But thinking about that a little more, I thought I’d see if others added water to thin it out so it would have a more similar consistency to buttermilk. It turns out that Rose (A Little Bit of Green) has done a lot of experimentation and wrote about her findings:

Yogurt– Adding yogurt instead of buttermilk worked wonders for the chemistry and the flavor. I found a good plain yogurt with no extra additives, just milk and cultures, had the same depth of flavor as the buttermilk and contributed lots of acid. However it did create a new problem. It was way, way, way too thick! If you can turn your bowl upside down and shake it and the batter stays put you have a problem. (Ok, I didn’t actually do that… but I’m pretty sure I could have!)

50/50 Milk and Yogurt Blend – This buttermilk substitute is my winning combination. The yogurt half adds the acid and the depth of flavor. The milk half adds enough liquid to create the same consistency. Depending on the brand of yogurt you use you may have to adjust the proportions slightly. I use Nancy’s Plain Organic which is very thick.

The Balkan style yoghurt we have is also quite thick. I’m still waffling about whether to add milk or water though. After all, buttermilk is virtually fat free and our yoghurt is 3.2% butter fat…..

he: Every single soda bread recipe I’ve looked at has an egg in it.


me: I’m NOT changing the recipe (any more than by using yoghurt instead of buttermilk)


he: Every single one! An egg!

We went out for a bike ride on this lovely day and on the way home stopped at the supermarket to buy buttermilk. Yup. I suddenly decided that I should use buttermilk after reading hundreds of soda bread recipes, seeing that all of them called for buttermilk.

Then I strolled through the garden snipping little pieces of our herbs that are just establishing themselves. And because the herbs are always lusher and greener on the other side of the fence, I got permission from our neighbour to steal a little of their sage and chives as well.

The dough came together beautifully. When I mixed the dough, I couldn’t stop myself from adding a little whole wheat flour so the bread wouldn’t be quite so white… I know, I know, I said I WASN’T going to change the recipe!

Of course I didn’t read that I was supposed to mix the dough with my hands and used a wooden spoon instead. (One of these days, I might learn how to read.)

Even though we WERE going to bake the bread in the barbecue, we suddenly decided to bake it in the oven. But I just couldn’t bring myself to set the dial to such a high temperature on our old oven (I’m pretty sure that it goes hotter than it says) and baked the bread starting at 400F and finishing at 350F. 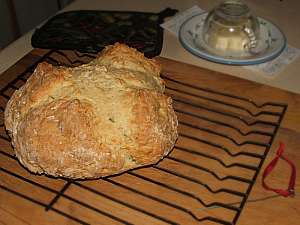 It took the same amount of time to bake as stated in the recipe. And it smelled fabulous!! And it tasted wonderful.

(Now I’m a little curious to see what will happen if there is an egg added to the batter. I gather an egg is not at all traditional in Irish Soda breads but we are just getting to the section in “A Thousand Years Over a Hot Stove” by Laura Schenone that talks about alterations made to recipes by immigrants to the USA when they suddenly were in a land with so much food.) 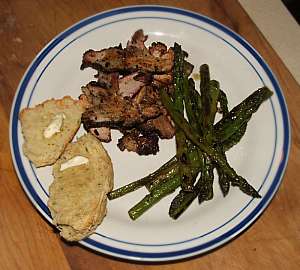 We served the bread hot out of the oven with thin slices of barbecued pork butt (western dry rub, aka #2) and asparagus that had been barbecue wokked with a little olive oil. We squeezed a little lemon juice on top. (Ha. Almost as good as Hollandaise sauce and with zero effort!) And of course, there was plenty of butter for the bread. I insisted on breaking the bread apart but T wanted to slice it. (After tasting it both ways, I admit that sliced is the way to go.) Needless to say, dinner was delicious.

Now THIS is the way I’ve always wanted my baking powder biscuits to turn out! The remarkable thing is that this bread contains no fat but is still very moist and wonderful. What wonderful bread, Ilva! Thank you! 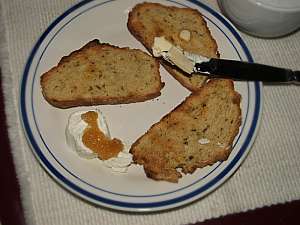 We toasted what was left over to have for breakfast the next day. It’s delicious toasted with butter, goat’s cheese and honey.

Of course, now you’ll want to make Soda Bread too. And do get some buttermilk rather than substituting with yoghurt! The aroma from the buttermilk is really wonderful. Although… now I’m a little curious to smell and taste the differnce if the bread were made with yoghurt.

Here’s this month’s BBB recipe. And here is what I did to it:

2.) Herbs: Allen calls for a dessert spoon each of the fresh herbs. I suspect that rosemary, sage and chives are merely suggestions and that any herb combinations would work. But I don’t think I would substitute with dried herbs. I’d sooner omit the herbs.

3.) Buttermilk: Next time, I will try making this with yoghurt instead of buttermilk. I’d be surprised if the bread didn’t turn out equally well. 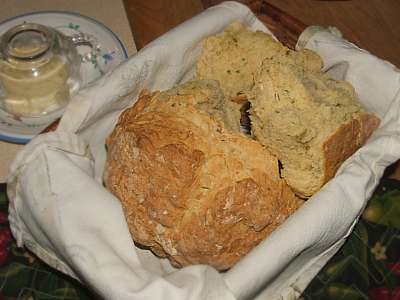 Boy am I happy that I chose this bread as the Bread of the Month for the Bread Baking Babes because between job sessions, headaches due to job sessions and the usual worries that are attached to having teens, I completely lost track of time […] But because of the ‘premonitial’ choice of soda bread, I can post about it now, it is so quick to make that even a forgetful Bread Baking Babe can make it in a whiff.

I often have to make soda bread because of my forgetfulness, twice a week one of my children need to bring lunch to school and sometimes I have to get up a bit earlier (not that much earlier though) to bake bread for the lunch sandwiches. I usually use a recipe from an Irish bread book (what else could I use, after all they are the masters of soda bread) called The Ballymaloe Bread Book by Tim Allen and I thought we could use another one in it with herbs in it now when summer is almost here! So here you are, I hope you will like it!

Of course, you too will want to bake along and receive a Baking Buddy Badge to display on your site; bake Herbed Soda Bread and post about it before the 29 June 2011.

We loved the bread so much that I made it again the next night without herbs just to taste the bread unadorned. And that time we baked it in the barbecue (remind me to post about it soon)!

edit 17 June 2011: Please see the followup to this post: Soda Bread Baked on the Barbecue