There’s nothing so thrilling as blue flames for dessert!
-me, Cherry Season = Cherries Jubilee, 25 June 2014

The other day, we got email from one of my west-coast sisters with her report on what they served for Christmas dinner – specifically the dessert: flambéed apples. Because they didn’t have any plum pudding.

She reported that the “no plum pudding” had become a tradition in their household ever since 2005, when Mum reported that she had forgotten to make the pudding. They immediately polled the Christmas Day diners to learn what to serve instead, and came up with the following list:

I have always been entranced by flames. On our summer camping holidays, I would sit for ages gazing at the flames from the campfire. Candles on the dinner table held an equal thrill.

And flambéed food combined with candles? What could be better?! 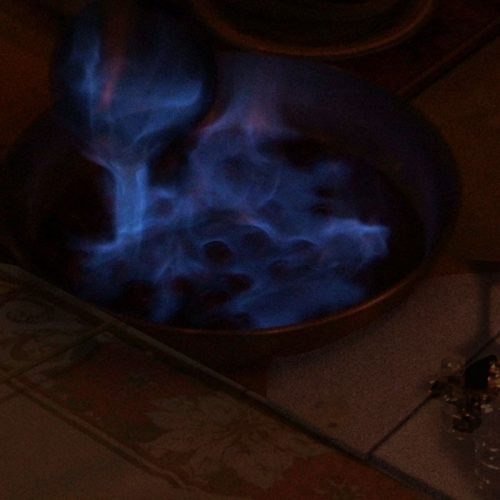 One year, my mother made a HUGE Christmas pudding. It was so large that she decided it would be safer for her to carry it to the table before she poured the flaming brandy over it. […] The moment came. The pudding was brought out. The lights were dimmed. Mom lit the brandy that was in a ladle and poured it over the pudding. Choruses of “Ooooh mmmm beautiful!!!” as the blue flame poured out of ladle and onto the emmense pudding. The blue flame danced down the mountain of the pudding and surrounded it on the edges of the platter.

– me, Christmases Past | The Christmas Pudding, 1999
My younger sister and I were sent to the Fort Gary Hotel dining room in Winnipeg to dine while my parents went off to a wedding reception. […] [D]ressed to the nines, we presented ourselves in the dining room at the appointed time. We were greeted like royalty and led to our linen covered table that sparkled with silver and crystal. […] [W]hat did we two wide eyed girls order for dinner? We studied the menu carefully and chose anything that could be flambéed. We had chateau briand for our main course and cherries jubilee for dessert […] in that candlelit dining room […] It really was one of the most wonderful dinners and the perfect precursor to what has become a lifetime of fine dining, whether flambéed or not, whether in ornate or simple surroundings.

But back to my west-coast sister… That fateful year that mum neglected to make the Christmas pudding, they devised a flambéed apples dish that sounds delicious. This is what they have served for Christmas dinners ever since.

But. What travesty is this? No plum pudding?!! We ALWAYS had plum pudding for Christmas desserts!

But on Boxing Day, when we were having left-overs for dinner, we realized we had to have pudding and hard sauce. Even though we have no pudding – in spite of the fact that I have our family’s pudding recipe, as well as Mum’s beautiful fluted pudding pot…. 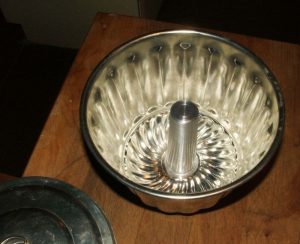 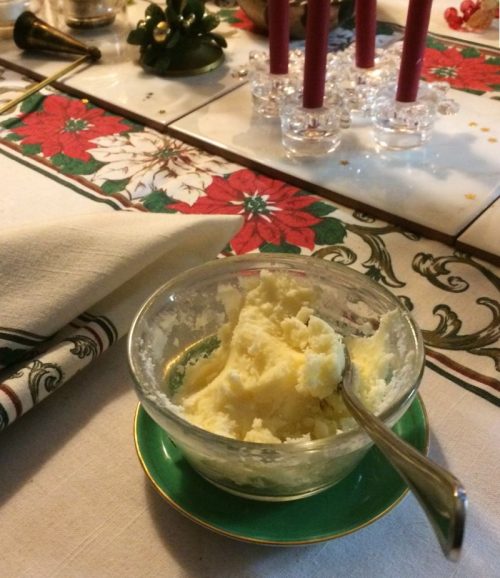 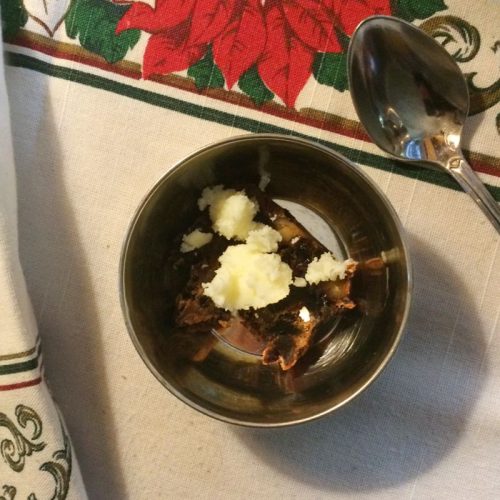 It turns out that a gently warmed slice of her Christmas cake is PERFECT with hard sauce.

Ha. Perhaps we should fulfill more of the requirements and flambée the slices tonight!

When I was growing up, I never thought I would become someone who neeeeeeeeds an annual Christmas cake. It’s so good with aged cheese! (It’s also really good with hard sauce….)
– me, blog from OUR kitchen, Mum’s Fruit Cake – revised, November 2020 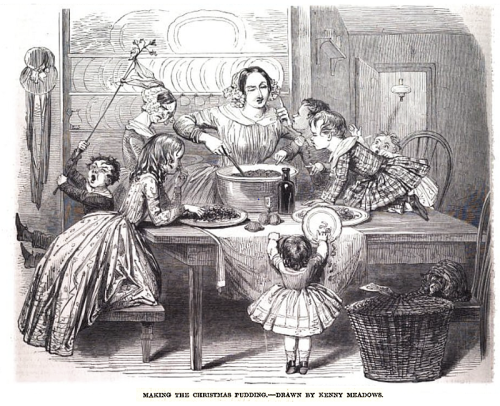 Who, that has lived to years of discretion, or floundered into an age of indiscretion, can say that maturity has ever afforded him such an object of intense gratification and love, as boyhood afforded him in a pudding? Not an ordinary pudding […]; but a Plum-Pudding! The Pudding, in fact, before the patrician splendours and true nobility of which all other puddings are vulgar, and of no account.
[…]
[W]hen the pudding, in all the glory of its own splendour, shines upon the table, how eager is the anticipation of the near delight! How beautifully it steams! How delicious it smells! How round it is! A kiss is round, the horizon is round, the earth is round, the moon is round, the sun and stars, and all the host of heaven are round. So is Plum-Pudding. 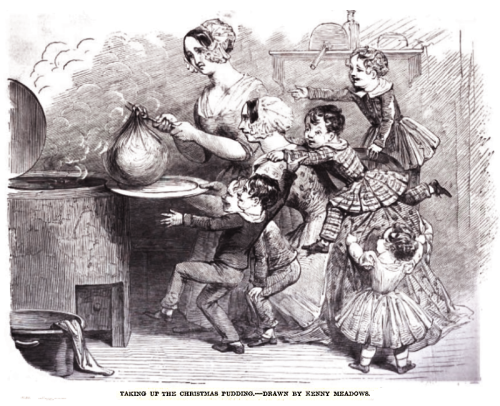 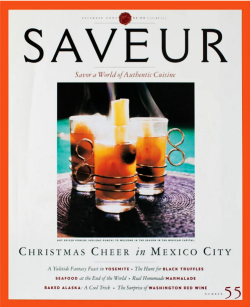 We are re-reading back issues of SAVEUR magazine and today (!!) came across their recipe for Plum pudding and Hard Sauce in the article “Yuletide at Yosemite” by Thomas McNamee in SAVEUR No.55 (December 2021). The description of the dinner is pretty much over the top. But we really like the idea of adding a little nutmeg to the hard sauce as per their recipe.

The Ahwahnee Hotel’s annual Bracebridge Dinner is a Christmas pageant full of farce and whimsy—but creful choeography, especially in the kitchen, is the star of the show
[…]
A giant white-capped globe of papier-mache—a plum pudding, according to the souvenir program—rides down the aisle on the shoulders of some singers, one of whom is carrying a fire extinguisher. A Wassail Bearer bears the wassail to the Housekeeper. She puts a candle to the stuff, and it bursts into flame. Yet another procession—the 18th so far, by my count—proceeds up the aisle, while the waiters rush in with plum puddings, the real thing, hot from the ovens, with brandy syrup and hard sauce.

Feeding and Clothing Everyone

A note about less fortunate people who have no plum pudding at all – people who are hard pressed to have any food on their tables.

Silly us. We imagined that everything would be back to normal by now.

Ha. Once again, we are staying home; many of us cannot go to work because of pandemic restrictions.

Now think of how very difficult these past two years have been for those who are living on or close to the edge.

And think about how much money we have NOT spent on travelling to and from work or going to restaurants, concerts, or plays. Surely we can spare some of what we haven’t spent on those who are less fortunate.

(As always, if you have something to add or say about ending world hunger, please remember to post your thoughts and ideas on your blog, FB, Twitter, at work, etc. etc.)