When I was in grade school, we had a multiple choice test with the following question.

Well, as you know, when in doubt, choose C. The correct answer is always C.

Yes, indeed. T’s been smoking again! How lucky am I? -ejm 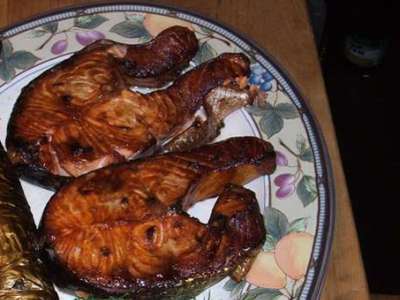 Having decided on smoked salmon for dinner, we took an early morning bicycle ride to our favorite Osler Street Fish Market. It was a lovely morning. We followed a newly built bicycle trail that runs alongside some unused railway tracks. It took us directly to the back door of the market. It was a perfect ride.

The market is owned by a Portuguese family and although it’s mainly a wholesaler they have an area set aside for the retail crowd. At the back of the building, in the big refrigerated room lay huge selections of whole fish. Vats everywhere; sardines, bass, red snapper, grouper, shellfish, squid and all at good wholesale prices. And all as fresh as we get here in Toronto. Many vats were labeled with Portuguese names that I didn’t recognize.

We chose our salmon and had it wrapped up. Suddenly, I thought of mackerel. Even though I’d seen smoked mackerel at many of the Polish delis in our neighbourhood I’d never actuality attempted smoking it on my own. As it turns out it couldn’t be easier. Because it has a high fat content it’s great for smoking. It’s less than half the price of salmon. It was love at first sight.

While standing in line at the cash I noticed an older woman with her husband in tow. She was ahead in line and was also buying mackerel. “How do you cook that,” I asked and was rewarded with a whole technique and recipe on how to prepare.

“But only fresh garlic,” she said wagging a finger at me. “Not that dry powder. It’s too bitter.” She was getting pretty excited. So was I. All smiles she left a few minutes later but almost immediately burst back into the store. “What about sardines?” she demanded. “You’ve tried them? Yes?”

But there was no stopping her, “Stronger smell but still good,” she was completely in her element now. “But you might not know the taste,” she smiled and was gone again almost before I could answer.

Man, I love people who love their food. 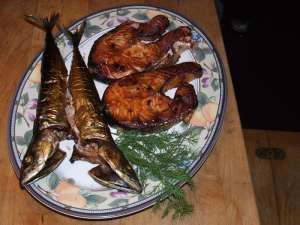 In this instance I put a little teriyaki sauce (soy sauce boiled with ginger, garlic, demerara sugar) onto the salmon. For the mackerel I decided to keep things even more simple. While searching the web I came across lots of ideas for brine and for spice rubs but we decided against any of these. Instead I just made sure the fish was really clean.

I followed the indirect smoking method and placed both salmon and mackerel onto the cool side of the grill. In 55 minutes I had an internal temp of 140F in the salmon and 145F in the mackerel. Perfect.

We divided up the fish and ate it cold with caper mayonnaise, toasted Portuguese corn bread, green bean salad vinaigrette along with a chilled rosé from Argentina. On a sweltering summer evening, what could be better? 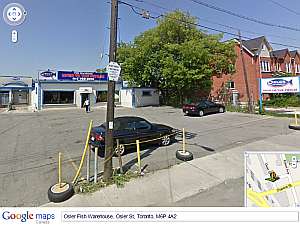 Freshly smoked fish is wonderful. We were amazed at how easy it is to bone as well. How lucky are we to live so close to the Osler Fish Warehouse? The quality of fish there really is stellar.

Public access to the bicycle path that runs just behind Osler Fish Warehouse is between the houses and the Osler Fish sign. It’s amazing to ride along the path. There we are right in the middle of Toronto but it feels like we’re out in the country just on the outskirts of a town. -ejm

(image taken from googlemaps; click on it for larger view) 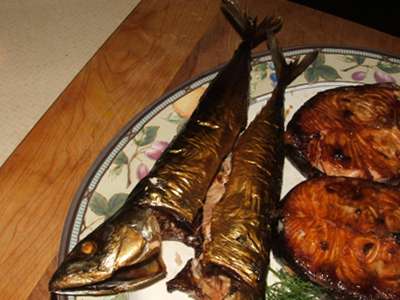