We have the most generous friends! Look what we made because of them! 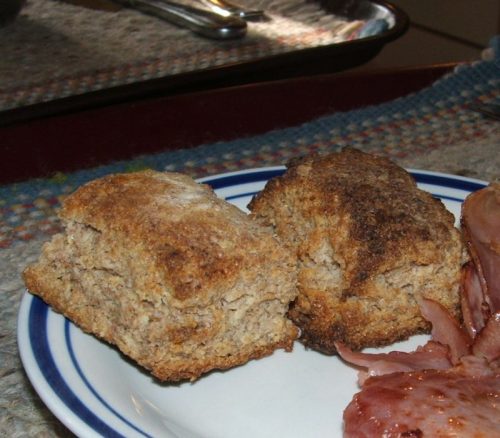 We cannot believe how very fortunate we are to be able to get the most wonderful eggs from our lovely friends who have a sheep farm.

Eggs from sheep?! No, no, no. Our friends like to encourage sharing; the sheep share the space with some free running chickens. And the chickens help harvest the small market vegetable garden.

It’s a win win win situation. Especially for us.

Not too long ago, when I was picking up a dozen beautifully fresh eggs, our friend included a giant bag of leeks, beets, and carrots. As she gave me the bag, she said that we should be sure to wash them because the beets and carrots had just come out of the ground that morning. (Wow. Those beets and carrots were delicious!!)

The next week, our friend handed me a bag of just milled organic red fife wheat. She and her husband had just purchased a small mill for the kitchen. While the wheat was not grown on their farm, it was grown nearby.

When I got home that night, I took our trusty jar of Jane Mason starter out of the fridge to build up the leavener for bread.

The next morning as I was mixing bread dough (100% red fife – except for the spoonful of Rogers 100% “no additives” whole wheat in the starter) to bake that night, T made biscuits with the red fife flour.

In spite of being made entirely with whole wheat flour, they were light and fluffy. We loved the slightly caramel flavour! 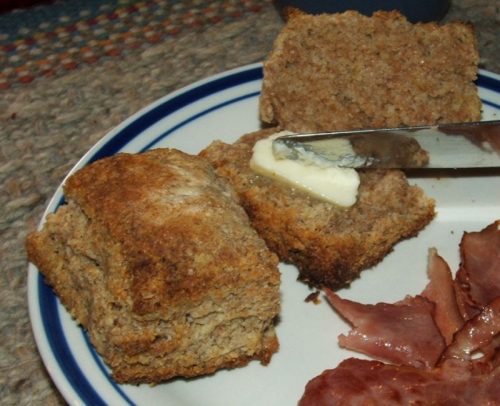 And the bread? Wow!! This is 100% whole wheat! It would have turned out even better if it hadn’t insisted on sticking itself to the brotform just as it was being turned out for baking. 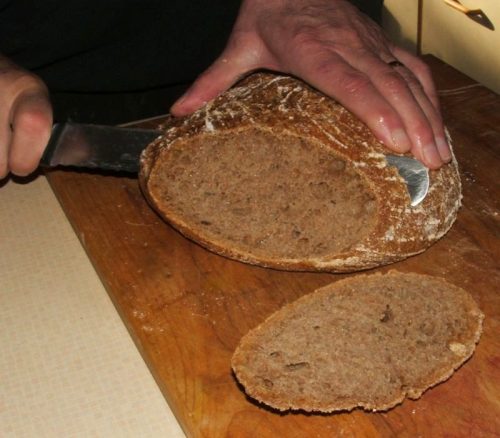 There is no photographic evidence of the mess in the brotform…. Suffice it to say that we now have a very very very clean brotform. (Thank goodness for the brush in the kitchen sink!)

A week or so later, we baked our usual take on Chad Robertson’s Tartine recipe, using the Red Fife flour in place of our usual whole wheat flour. We used 100 grams of the Red Fife flour, 100 grams Rogers “no additives” unbleached all-purpose, 10 grams barley flour, and 5 grams malted wheat berries. Because of using organic flour that was essentially stone ground (ie: none of the grain was lost or discarded), I didn’t think it necessary to add wheat germ. 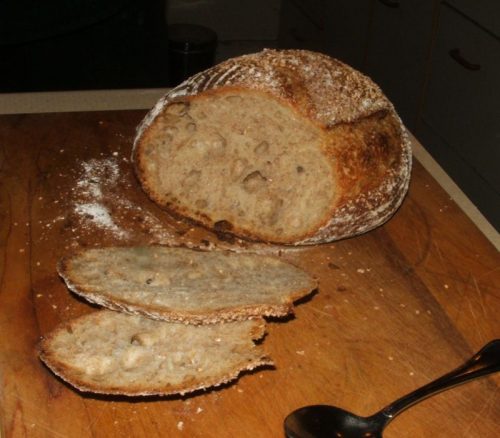 What we did with the leeks…

Of course we made potato leek soup. How could we not? It was The. Most. Spectacular. Soup.

No photos though – we were busy eating it…. But, it looked pretty much like any previous potato leek soup.

After making lots of soup, and flavouring biryani with a layer of caramelized leeks, we still had plenty of leeks left. We considered making more soup. But then T had the brilliant idea to make a Pernod pasta sauce with leeks and a few shrimps. 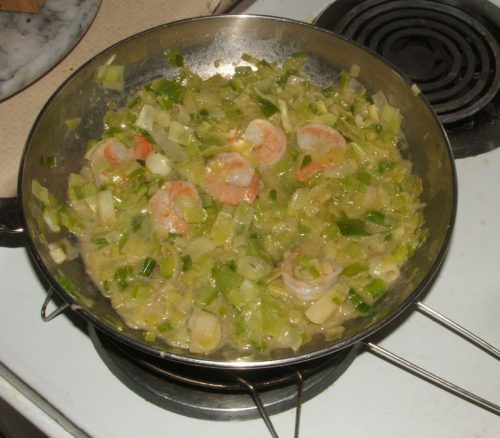 The final dish might not look quite so pretty, but it sure tasted fabulous! 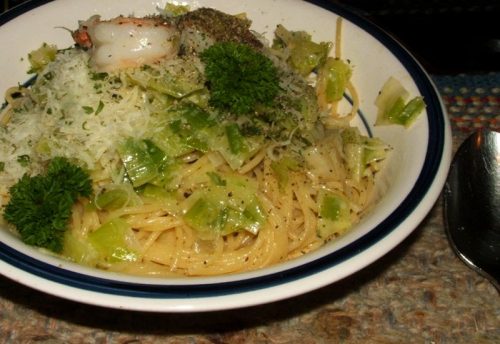 (The parsley is from our garden! We couldn’t believe it was still thriving, in spite of being almost completely buried in snow.)

More About Sharing
Every 10 seconds, someone uses a food bank in Ontario. One in three is a child. 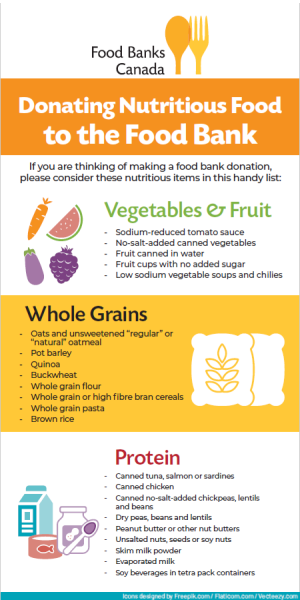 As you plan your holiday feasting, please remember to fill up a basket or two for those who are struggling to put even the most basic food on their tables.

A new report says that more people have been visiting food banks across the province [of Ontario] more frequently, including a “concerning” number of people with full or part-time employment. Feed Ontario’s annual hunger report — which captures food bank usage in the province, analyzes trends and provides recommendations — revealed that […] over the past three years, those with employment income who access food banks have increased by 27 per cent.

– Christine Rankin, CBC News | Ontario hunger report says 1 in 10 Ontarians can’t afford a basic standard of living, 2 December 2019
Toronto’s Sounds of the Season is much more than a one-day event. The annual charity drive campaign runs until December 31 to collect food and monetary donations in support of GTA food banks.

– CBC Communications, CBC Toronto Sounds of the Season
Food banks across the country can get deals that regular shoppers can only dream of, because they buy in bulk and build partnerships with stores and suppliers to get items at discounted prices. […] As of 2016, about 850,000 Canadians were relying on food banks to survive, a number that Food Banks Canada CEO Chris Hatch said is “stubbornly high.” […] Buying in bulk with donated money can also be a more efficient way to get food on the tables of families who need it.

– Angela Bosse, CBC News | What to consider before you donate to a food bank, 10 December 2018

(If you have something to add or say about ending world hunger, please remember to post your thoughts and ideas on your blog, facebook, at work, etc. etc.)