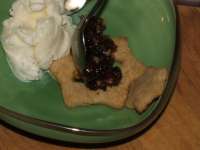 We have had the same dessert three nights in a row now. I often forego dessert but this is just too good!! And the beauty of it is that it’s small. So there are no feelings of guilt (even though the whole thing is absolutely laced with butter).

When T first made “sweet cream” ice cream, it was right around the same time that I was making ginger shortbread. And I immediately thought of mincemeat. How good would those be together??

T agreed and went ahead and made mincemeat. I still can’t stand him for being so skillful. I told a colleague about the mincemeat success and my colleague hates T too.

You too can hate him after you’ve made and tasted his version of mincemeat. He says it couldn’t be simpler to make. Here it is:

Notes:
* edit December 2010: The fruit should be quite coarsely chopped. It’s best to do this by hand. (ie: Do NOT use a food processor) If you are lazy when hand chopping, so much the better. We’ve found that largish chunks of fruit are better.

* Some lemon peel might be nice too. It is essential that there is zero pith in the peel. Any hint of white makes it very bitter tasting.

** Brandy, Scotch, rye whiskey will do if there is no rum in the house.

**** Add or subtract whatever fruits you have on hand. Next time we’re thinking of adding dried apricot. 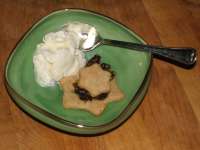 Usually I make all tiny star or bird ginger shortbread cookies. But this year, I got tired of the game as I was punching out tiny star after tiny star. I decided to use the larger star cutter and cut out the centers to make some large cookies that were still “small”. I had no idea at the time that the decision was serendipitous.

If you’ve had it, you know that mincemeat is very rich and a little goes a long way. The large star cookies with the center star cut out are the perfect vehicle for hot mincemeat. A small star set on top is pretty too. Then, gilding the lily, we added “sweet cream” or ginger ice cream (even though ginger is my favourite flavour these days, I prefer “sweet cream” with mincemeat and ginger shortbread). On Christmas night, my sister went back for one more tiny star and a tiny spoonful of mincemeat. She said no to the icecream, saying she wanted to savour the flavours of the shortbread and mincemeat.

At first, I was thinking it was a shame to have omitted the suet from the recipe. But it turns out that we may be omitting suet every time. Why? There is no resulting gumminess when the hot mincemeat hits the cold icecream. Because, after all, cold butter is just butter. Cold beef fat is, well, cold beef fat – not the most appetizing thing for the 21st century palate.

(click on images to see larger views and more photos)