Yes, you can make yogurt with just milk, a previous culture of yogurt and canning jars. I have done it many times before I finally bought a machine. -Glenda, Domesticated Engineer: Yogurt Making

This was VERY exciting news!! I showed Glenda’s recipe to T and he immediately went onto YouTube to see what others had done. 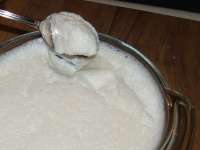 So, following the instructions, milk was scalded. At the appropriate time, few tablespoons of commercial yoghurt were added. A little time passed.

And we have homemade yoghurt!!! Made in our ridiculously chilly kitchen! It only took about 3 hours! And Glenda is right. It’s easy! Simple even.

All of the recipes called for scalded milk. Initially, we thought this was left over from when milk was still unpasteurized. But wikipedia has the following explanation about the need for scalding milk when making yoghurt:

Scalded milk is milk that has been cooked to 82°C/180°F. […] Scalding milk for yogurt makes the proteins unfold. The acid produced during the yogurt development causes less whey separation and a firmer yogurt.

Here’s how T made yoghurt using our stove, oven and fridge:

Notes
* The yoghurt must be made with milk solids and active bacterial culture only (ie: zero gelatin or other thickeners which will interfere with fermentation). We used “Phoenicia” brand 3.2% yoghurt, but I suspect any plain yoghurt will do. (“Astro” and “Western” are other brands that would work.)

** If the milk is too hot when the yoghurt starter is added, the bacteria will die and your yoghurt will not set.

*** Although no reason was given, one recipe cautioned against using stainless steel containers to ferment the yoghurt. 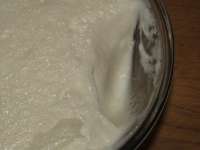 This yoghurt really is absolutely fantastic. It is a little on the sweet side for our taste – even though there is no sugar. With this acidity, it would be perfect dolloped on top of pumpkin pie.

We really would like it to be more sour though. Next time (which will be soon), we’ll leave the yoghurt to ferment a little longer so that it will taste a little more sour.

We couldn’t be more pleased though. Thank you for the push, Glenda!

Did you remember to have your shroves today? If not, there’s still time! You have until midnight….

(We had cornmeal shroves with honey and goats cheese for lunch. The batter calls for yoghurt. As it happens, we had some on hand. :-))