Early this week, we were talking about Easter-like bread:

me: Which would you rather have?

T: (surprise, surprise) All of them!

me: Umm, okay. Which shall I make first?

So down to the kitchen I went to make my alma mater’s “Tuck Shop” cinnamon buns. And this time I followed all the instructions. (Read about the last time.)

I had forgotten how thrilling it was to knead dough that is basically the consistency of loose cream of wheat.

And cutting the risen dough into orange sized pieces was a complete joke. But somehow I managed and got 12 slack, slack, slack knots of buttery, sugary, cinnamony dough onto two parchment covered cookie trays. I baked them and… 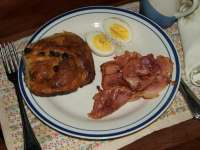 Oh my!! What great cinnamon buns! They were a little flat but they were fabulous. (click on image for larger view and more photos)

And in virtually no time at all, there were no more cinnamon buns left.

me: Which should I make now?

me: (laughing) Okay. Cinnamon buns it is. Does that mean you don’t want Luciacats or Hot cross buns?

And so, down to the kitchen I went to make another batch of cinnamon buns. And this time, I put all twelve slack, slack, slack knots of buttery, sugary, cinnamony dough onto one parchment covered cookie tray. And baked them and…

Oh my!! What great cinnamon buns! And this time they were exactly like Tuck Shop buns! (click on image for larger view and more photos)

Here is the version of the cinnamon buns I made based on the recipes for “Tuck Shop Buns” in A Taste of the Arts published in 1982 by the Edmonton Arts Cookbook Society as a fundraiser and the slightly different version of the recipe I snipped out of my alumni magazine, New Trail. (recipe online: Tuck Shop Buns: The Recipe):

Before serving, reheat each bun upside down in the toaster oven to ensure that the cinnamon butter stays on the bun. Put extra butter on the table for the decadent.

I’m afraid I’m actually far too late for WTSIM… Easter Basket! hosted by Johanna (The Passionate Cook) but if I’d been on time, this would have been my post…

edit 9 April 2007: If you would like to participate in this event, the next WTSIM… theme is bread. (How ironic! If I’d waited for the announcement for April’s theme, this post on cinnamon buns could have been one of the early entries! :lalala:) Entries for WTSIM… Bread are due 25 April 2007. For more details, please read Andrew’s (Spittoon Extra) announcement: