summary: plastic and cheese do NOT go together; how to wrap cheese: in wax paper or parchment paper or even aluminum foil, anything but plastic; plastic wrapping is very bad for cheese, especially Emmental, Fromage de Chaumes, Cheshire Cheese, Stilton, and Epoisses; plastic wrapping destroys Epoisses;

[C]heese often comes in plastic, but cheese is also a living food. Would you keep your baby wrapped in plastic? – Adam Moskowitz (aka “The Big Cheese”), Larkin Cold Storage and Columbia Cheese

On a beautiful sunny day in September, we masked up and bicycled over to The Cheese Boutique to see what was in their Special “one for $13 or three for $30” fridge – it’s at the back of the store and contains various blocks of cheeses. Each individual kind is cut into blocks that are roughly the same size. “Roughly” is the keyword here. Some of the blocks are significantly larger than others.

We got Emmenthal, Oak Manor Stilton, and Fromage de Chaumes. When we got home, the first thing we did was to remove the plastic wrapping. 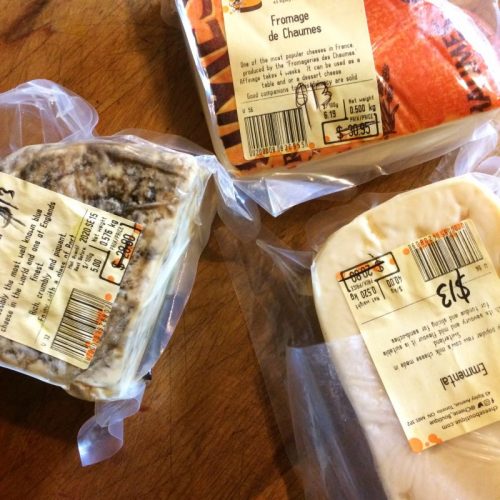 Really?? Plastic wrapping? In these times, when landfill and oceans and innocent creatures’ bellies are being filled with plastic that we stupid humans keep producing and just tossing away? Exactly what is in our heads? Out of sight, out of mind?

But it’s not just the environmental issue with plastic wrapped around cheese. It’s an issue of flavour. Plastic wrapping ruins cheese!

The Oak Manor Stilton and Emmenthal were quite wet. The Emmenthal actually dripped liquid from its holes! 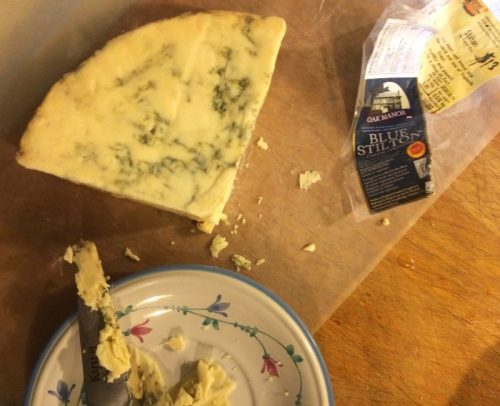 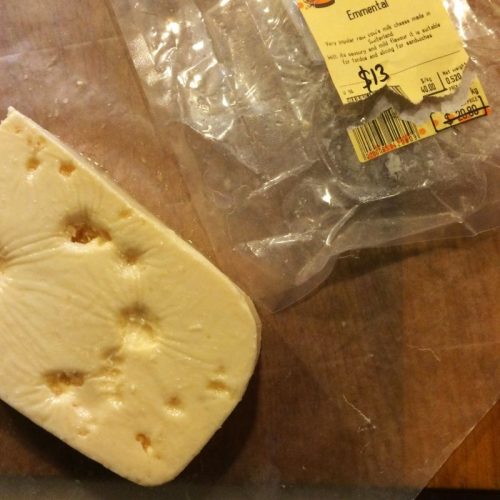 This is how the Emmental looked AFTER being sponged off! 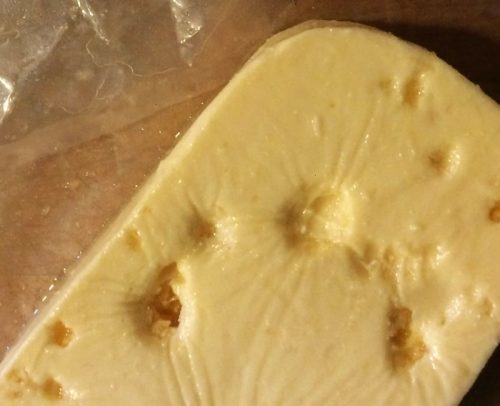 Happily, it turned out that the Emmental and Fromage de Chaumes had not suffered greatly in their plastic wrappings and after being sponged dry with a towel, they were spectacular. 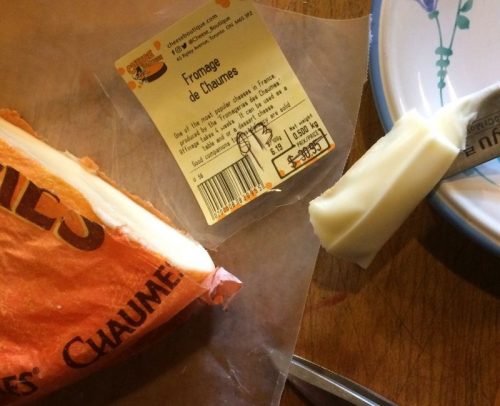 The Fromage de Chaumes was especially wonderful. It is the best melting cheese and is great on toast. It immediately took me back to my childhood and the section of Heidi that I loved the most:

[H]e went up to the hearth, pushed the big kettle aside, and drew forward the little one that was hanging on the chain, and seating himself on the round-topped, three-legged stool before the fire, blew it up into a clear bright flame. The kettle soon began to boil, and meanwhile the old man held a large piece of cheese on a long iron fork over the fire, turning it round and round till it was toasted a nice golden yellow color on each side. […] Then he brought her a large slice of bread and a piece of the golden cheese, and […] filled her bowl [with milk] again to the brim and set it before the child, who was now hungrily beginning her bread having first spread it with the cheese, which after being toasted was soft as butter; the two together tasted deliciously, and the child looked the picture of content as she sat eating, and at intervals taking further draughts of milk.

Alas, the Stilton did not fare so well in its excessive plastic wrapping as the two other cheeses. We used some of the Stilton to make a blue cheese sauce to put on grilled pork chops. Sadly, the sauce was a little less than spectacular. In fact, it was downright disappointing. (The photo of the outrage doesn’t quite displays the revolting aspect of the sauce! Although… before adding the ‘Empress of India’ nasturtium, it did look slightly less than appetizing. 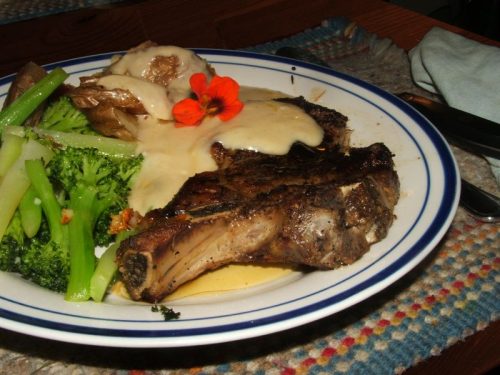 Still, we figured it would be okay to use for salad dressing, as long as we were careful not to use too much. We wrapped it in waxed paper.

A few days later, we made dressing with it to put on Romaine/roasted-potato/redpepper salad. Oh my!! The salad was fantastic. But we both though it needed more blue cheese! In drying out and being able to breathe again, the Stilton was delicately flavoured and wonderful. Not harsh in the least! 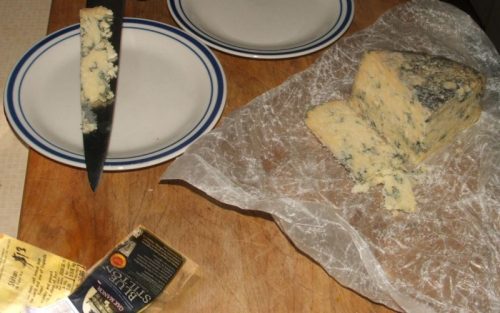 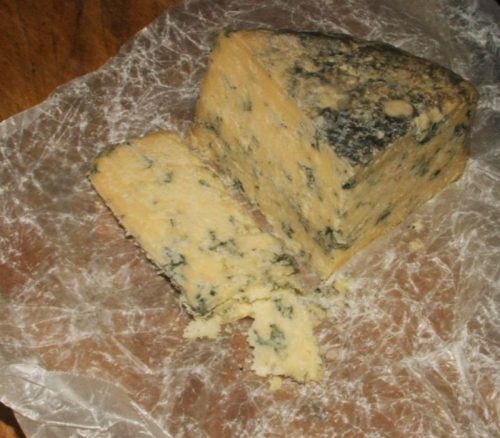 A couple of weeks later, we bicycled to the Cheese Boutique again and got Cheshire, Emmenthal, and Epoisses de Gaugry.

Now, I have to be honest. I find Epoisses to be exceedingly stinky. I was not entirely keen on getting it. But T was ecstatic.

So when we opened the box, I was expecting a stench. T, on the other hand, adores Epoisses and was expecting it to be just pleasantly smelly. 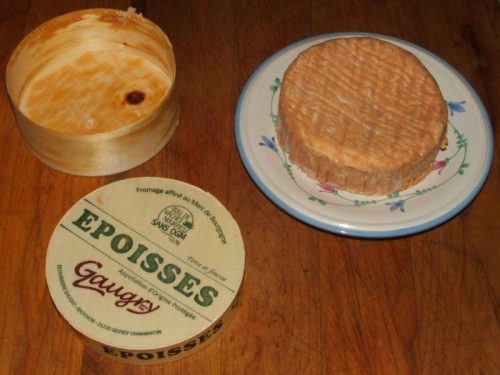 The cheese reeked!! It was covered in a thick film of oozy liquid. The blame for the excessive plastic wrapping can’t go only to the Cheese Boutique though. Shame on the EU for insisting that this cheese must be covered in plastic before being placed in its wooden box!

It turned out that the box itself was exactly as T expected. Even I agreed that it was going to be really good for dessert that night. We decided that if we left the unwrapped cheese to breathe, we would splash out and serve it with little glasses of Grappa…. 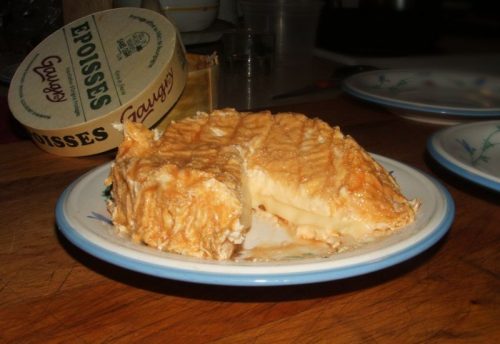 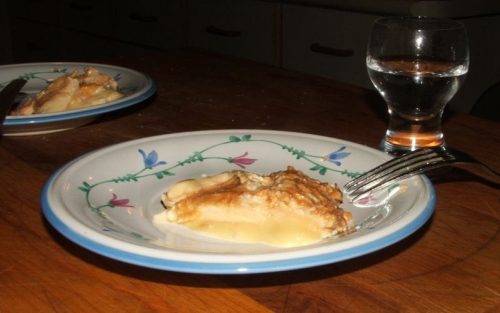 Alas, what should have been really fabulous cheese was entirely ruined by plastic. After choking down what was on our plates, we decided we had to throw the rest away! Into the green bin it went to stink up the city’s wet garbage.

We also think we may never be willing to buy Epoisses in Canada again. And when we go to France to get our Epoisses fix, we will have to be prepared to say apologetically, “Pardonnez nous pour cette question impertinente: le fromage est-il enveloppé de plastique comme les fromages français exportés au Canada?”

The really bizarre thing is that the Cheese Boutique people definitely know better. I can only imagine that a stupid government agency has made the plastic wrap a requirement.

Especially because plastic does NOT grow on trees….

What others say about how to wrap cheese

Wrapping your cheese in any type of plastic, whether it be cellophane or bags, prevents it from breathing and builds up too much moisture. Sealing it in plastic alters the protective rind that preserves the cheese, and eventually removes any flavour and texture. […] Conserve your cheese by covering it in wax paper and aluminum foil. This keeps it from drying out, and allows it to breathe, ensuring that your cheese lasts as long as possible. […] Wrapping cheese too tightly prevents it from releasing moisture and breathing out odours that can cause ammonia. When wrapping your cheese in aluminum foil, you should make sure to leave room for it to breathe.
&nbps
– Castello Canada | How to Store Cheese [And yet, at the supermarket, Castello cheeses are always wrapped in plastic!]
[C]heese contains live cultures that needs to be treated right. […]
supermarkets and grocers sell their cheese in shrink wrapped plastic. While it isn’t the optimum method of storage, it’s unavoidable. Once you’ve made your purchase though, open it, smell it and taste it. If it has the unmistakable tinge of plastic, shave it very very thinly and keep tasting the shavings until you’re absolutely sure the flavour of plastic is gone. This method is also handy if your cheese develops mould. Says Sutton: “The cheese will be absolutely fine to consume as the mould is usually a result of the combination of damp and air which combined with the cheese create the ideal environment for the mould to develop.” […] Any reputable cheese deli should also carry cheese storage bags. But if that’s not available wax or parchment paper is just as good an idea. To do so, simply lay the cheese flat on the piece of paper and wrap it around in neat creases. The idea is to give the cheese some room to breathe while creating a protective environment and to prevent it from drying out. At any point these cheese is unwrapped for consumption, use a fresh piece of paper to wrap it again.

Michelin Guide Global | Ask The Experts: How To Store Cheese
Always re-wrap cheese in fresh wrapping, preferably in waxed or parchment paper, after the cheese has been opened to avoid having the cheese dry out or pick up other flavors. Remember that natural cheese is a living organism, with enzymes and bacteria that need air and moisture to survive. Thus, re-wrapping the cheese in paper and then in plastic wrap to create a micro-environment for the cheese is the preferred storage treatment. However, you should not leave cheese in the same wrappings for extended periods of time.

– American Cheese Society, Tips For Cheese Lovers | Storing Cheese
[P]lastic wrap actually kills cheese, well most of the time. The reason is because plastic, in most situations, is not breathable and so cheese — because it is a living, fermented product — needs some oxygen in order to really flourish.

– Brendan Newnam, APM: The Dinner Party | Why You Might Want to Reconsider How You Store Your Cheese
Washed rind cheeses like taleggio, limburger, and epoisses are best eaten straight from the cheese shop. These are the smelly cheeses, and the stink will only proliferate in the small confines of your refrigerator. Their rinds (and, in turn, the inner paste) will dry out and crack, which is nothing short of a death sentence for the bacteria living on the rind that makes this style of cheese distinctive. Washed-rinds will last two to four weeks, but try not to see them past their first week home.

The best method for storing cheese is exceptionally simple […]
But first: Steer clear of plastic wrap.
This may come as a surprise, but cheese is actually a living thing. It sweats. It ages. It even breathes. When cheese is wrapped in plastic wrap it can no longer intake oxygen—in short, it suffocates, resulting in an amoniac flavor and possibly even harmful bacteria.
As self-professed “curd nerd” Jake Lahne of Serious Cheese explains, plastic wrap can also cause the cheese to taste like, well, plastic. Which is not the flavor you were hoping for when you invested in a $15 hunk of funky Scharfe Maxx from the cheesemonger. So if your cheese was wrapped in plastic at the supermarket, rewrap it the right way as soon you get home. Because you know better. 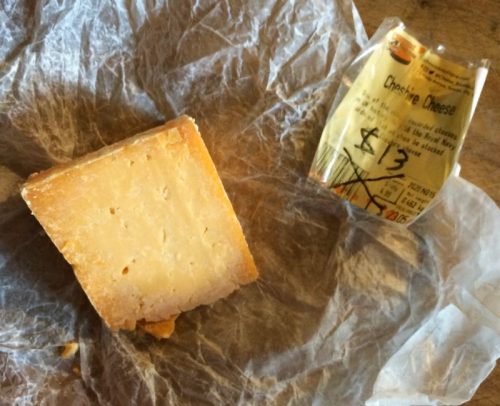 Cheshire Cheese is brilliant when it’s allowed to breathe

1 response to “Why are we still wrapping cheese in plastic?!”