For ages, I’ve been meaning to post about the preserved artichoke hearts. Here it is at last. Better late than never. 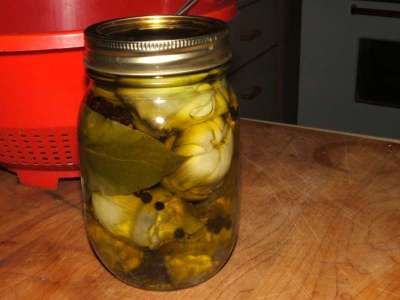 When we were shopping for Thanksgiving dinner, we saw one of the stores in the predominantly Italian area of town was selling boxes of baby artichokes. Ontario artichokes – twelve artichokes in the box!!! We couldn’t resist buying them; we love artichoke hearts!

We talked about what we were going to do with all those artichokes. Naturally, Hollandaise Sauce was mentioned. And then Blue Cheese dressing. But still, that was a lot of artichokes for us to consume. And we suddenly thought about preserving the hearts.

Let me tell you; nothing could be further from the truth. It was insanely easy. And the results? Infinitely better than the supermarket jarred versions.

Artichoke hearts are brilliant on pizza. They are also delicious mixed with spinach and goat cheese for a delicious spread.

On New Year’s Day, we were still replete and revelling, congratulating ourselves for the absolutely brilliant dinner we had the night before:

We started the evening with cheese cookies, julienned zucchini and red pepper with roasted red pepper dip – our guests playing with the kitten until he was so happy and exhausted that he fell asleep on a chair. Then we moved on to fresh pasta with Bolognese ragout, which was followed by orange fennel salad. The main course was fish soup (cod, shrimps, scallops) with rouille and, of course, “fish soup” bread. Dessert was champfleury cheese, red grapes and various cookies. (I hope you don’t imagine that we even remembered that we owned a camera, let alone use it to get photographic evidence of that candlelit extravaganza!) 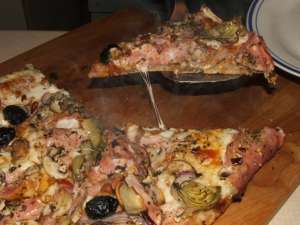 6 responses to “I ♥ artichoke hearts!”