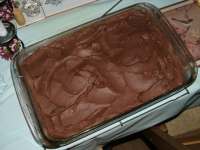 As I begin to emerge from December’s relative silence, I have begun to get caught up on others’ blogs. I just came across Brilynn (Jumbo Empinadas) post about brownies. She mentioned that she was willing to continue trying different brownie recipes, in search of the ultimate brownie. I’m not so willing.

I might be wrong but let’s face it. The brownies I make are so good, I cannot imagine any brownies being better. So if it ain’t broke…

I also realized it had been too long since I made brownies! And so, because T didn’t get a cake on his birthday, I made unbirthday brownies for him yesterday. The best brownies ever. And as Brilynn said in her post, I know what you’re thinking

I’ve seen countless recipes for The Best Brownie EVER, The Perfect Brownie, The Last Brownie You’ll Ever Eat, etc… There’s always someone who thinks they have the be all and end all recipe for brownies

No, really and truly!! Our brownies are indeed the best brownies. Or at least the best brownies we’ve ever had. They are “brownies cockaigne” in The Joy of Cooking (1975 edition) by Irma S. Bombauer. I’d like to say that I made an essential alteration to Bombauer’s recipe to make it into the quintessential brownie recipe but I can’t. I don’t really make any change to the recipe except to add Thompson raisins rather than nuts. 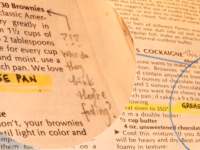 Now the icing for brownies is a different story – because, let’s face it, brownies are just better with icing. Each time we make chocolate icing, we continue to work on it. The icing in the past has been pretty close to perfect but still required small refinements. And this time, I think that T has come up with the ultimate chocolate icing.

The ultimate chocolate icing that doesn’t use icing sugar! I shook my head as he insisted on using regular granulated sugar. But after getting the look and firm, “Trust me. I know“, I wisely stepped aside and waited for the wails and shrieks of failure.

There are never wails and shrieks of failure coming from T. Of course, as usual, he was right. I should have trusted him. He does know. The icing is stellar. Here is what he did:

Slather over cooled cake or brownies.

And speaking of too much chocolate, have you read Jeanne’s (Cook Sister!) Death by Chocolate post?

edit 29 April 2007: During April, there is a brownie event taking place on Myriam’s blog, Once Upon a Tart. Read more: