I’m doomed… I’ll never be a

Warning: post contains pathetic whinging about bread making techniques and recipes as well as criticism of bread baking icon Peter Reinhart. If you are a Peter Reinhart fan, please read no further lest you be overly offended. 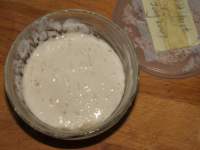 Some time last month (or was it the month before?), when I saw that the Bread Baking Babes were planning to make something with wild yeast, I was excited and thought I would apply to become a BBB. Because I captured yeast last summer and have been doggedly keeping it going since then with a LOT of trials, shrieks, failures and tears of frustration. I’ve just recently managed to tame it (sort of) into producing NON-sour bread.

One of the things that kept me from murdering my wild starter was the thought of becoming a babe. And at last, the recipe was announced!

In her post entitled “SourDough: Poilane-Style Miche”, Tanna (My Kitchen in Half Cups) wrote:

How intimidated are you by pages and pages of a recipe? Do your eyes cross when you see more than two paragraphs? Do you suffer brain fade when a glance shows you the recipe goes for a second, third page?

Why yes, as it happens: very intimidated; they do; I do.

In fact, I suffer brain fade when a cross-eyed glance shows me that the recipe goes longer than the bottom of the page. (Although I’m not quite as susceptible as my sister, who has problems with any recipe that says “meanwhile”.)

Here is the recipe in question.

Tanna goes on to tell of her triumph (you really should look at the beautiful bread she and the other babes made!)

I’m telling you this is really easy 5 minutes a day, for really impressive bread!

Easy, she says? Ha. I can’t even manage to get past “barm”. I thought I’d skim ahead to see if it got any better and got stopped firmly at “seed culture”. Barm?? Seed culture?!? Augh!!!

Alas. My eyes have glazed over several times as I’ve tried to read and reread the recipe for this month (if you can call it “rereading” when only a few of the words have been comprehended on earlier attempts). And I wouldn’t say that I’m entirely faint-hearted about bread baking. It’s not like I haven’t made a lot of bread! Yeasted, unyeasted, wild-yeasted… a LOT of bread.

I’m doomed to be a Bread Baking Crybaby…

You see, it’s this deep seated prejudice I have.

Am I really the only person who doesn’t absolutely adore everything that Peter Reinhart has written? I admit that I’ve only read two of his books. The first one, Crust and Crumb, gave me the pip. (Formulas instead of recipes? Oh please. Prodigal use of plastic wrap and cooking spray? Yikes. Recommendation to use expensive parchment sheets instead of rolled parchment paper? Rrrrrrrr.) The second one was The Bread Baker’s Apprentice. After hearing how fabulous it was from several sources, I got it out of the library. And got in trouble for sighing and hissing as I read it in bed before going to sleep. Did I try any of the recipes (formulae?)? Nope. Too prejudiced.

But the bread that the Babes made does look awfully good. So I tried to read the recipe again. And got as far as:

5. Put the dough on a floured counter and knead the dough […] Lightly oil a large bowl and transfer the dough to the bowl, rolling it around to coat it with oil. Cover the bowl with plastic wrap.

Lightly oil??? For French bread?? Wait. What am I saying? For any bread? Oiling the rising bowl is just not necessary… (read more here)

I know. I could just leave the oiling of the bowl out. But what about the sourness? Everyone says that the bread is a little bit sour. Nope. I’ve worked way too hard over the past year to get our wild bread to stop being sour.

But maybe you’re not?

Sher (What Did You Eat?) is hosting this month’s Bread Baking Babes/Buddies task. Herculean task, I should say… she wrote:

[…] If you would like to join us being a Bread Baking Buddy here’s how!!!

You have 14 days from our posting date to bake the bread and post about it on your blog with a link to the Kitchen of the Month’s (that’s me) post about the bread. That would mean that your post date would be June 2 [2008].