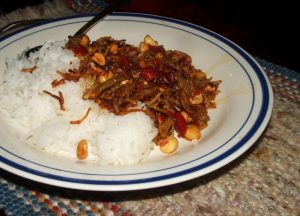 Since cancelling our long-standing subscription to SAVEUR magazine, we have been cherry picking past issues to have as reading material in the bathroom. (I love to read in the bath but am terrified to bring my e-reader in – what if I drop it in the water??)

[N]ow, instead of reading new issues of SAVEUR, we are randomly choosing a magazine from the large stack on the shelf, and re-reading the brilliant contents. Sometimes, we are reminded of recipes we tried and loved and for some bizarre reason forgot about. And sometimes, we see something new (for us) to try and wonder how it is that we had missed it the first time round.

Last month, just before he pushed one of the thoroughly re-read magazines back onto its shelf with all the other back-issues of SAVEUR, T announced that he knew what we should do with all those waxy white potatoes we had just got (we thought they were baking potatoes…). We would try Indonesian fried potatoes that call for “medium waxy potatoes, peeled and thinly sliced”. Wow! The dish was stellar. Really stellar.

And I wanted to report on it. But we couldn’t remember which magazine the recipe was in. We did manage to find the recipe online; it had “April 11, 2007” stamped on it. So I looked in vain through No. 101 (April 2007). Even though T swore that that wasn’t the right front cover (a photo of “comfort pie”). Then I thought it might be in one of the previous 2007 magazines. Nope.

I couldn’t stop myself from skimming (and re-skimming) through No.101, sure that Christopher Tan’s article, “My Singapore” in No.101, p.63-71 ( with the words “Singapore has long been a crossroads for cultures, a laboratory for culinary ferment” and “my own heritage is mostly peranakan, with a little Cantonese and Indonesian Chinese”) MUST contain the recipe that T had made not long before!

And so we kept shouting back and forth – me crouched down in semi-darkness, squinting at the magazine filled shelf with a flashlight in one room and T in another room housing the computer.

he: It says April 2007 on saveur.com!
me: I know! That’s what I have. There’s a picture of some kind of cream pie on the front.
he: No! That wasn’t the one.
me: Well, where did you put the magazine?
he: I shoved it onto the shelf somewhere.
me: But they’re supposed to be all in order!
he: They seem all jumbled to me…. [walking in and seemingly randomly pulling a magazine out] Here it is!
me: What?! That’s 2002! No wonder I couldn’t find it.

The SAVEUR recipe calls for the potatoes (waxy potatoes… exactly what we had) to be “peeled and thinly sliced” before being deep-fried in peanut oil a wok. We decided that it would be WAY easier to use our mandolin to make shoe-string potatoes. Besides, other online recipes for this dish call for shoe-string potatoes.

We also used some of our neighbours’ wonderful hot hot hot chilis that they are afraid to eat. Lucky us!

SAVEUR.com, Fried Potatoes with Chile Paste (Keripik Kentang Balado), 11 April 2007
For some bizarre reason, for some of the online recipes, they’ve decided not to include which issue a recipe was in.

me, Delving into the Archives: Pork al latte | blog from OUR kitchen, 19 March 2016
I’d always known what my dream food would taste like. It wouldn’t be squishy and insipid […] it would be loud and bright and confident-a fire truck roaring through the night. I found my fire truck in 1982, while I was in the Indonesian capital of Jakarta […] [The] table was layered with an exotic jigsaw puzzle of 15 or so small bowls containing […] colorful and diverse offerings. […]
This is it, […] a baptism by ginger, kaffir lime leaves, coconut milk, lemongrass, and ruby red chiles that cleared my mind and made my brow sweat.

I’m not sure that these potatoes cleared my mind (Ha. What mind? you may ask

). But they sure were good! Unbelievably good. Here’s what we did: 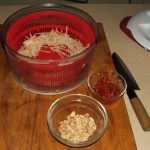 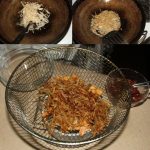 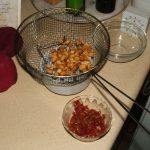 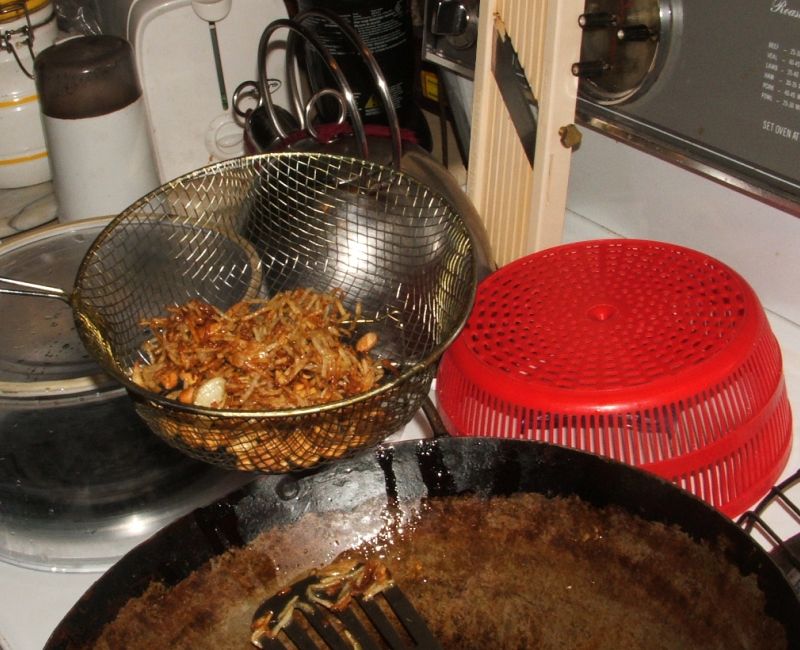 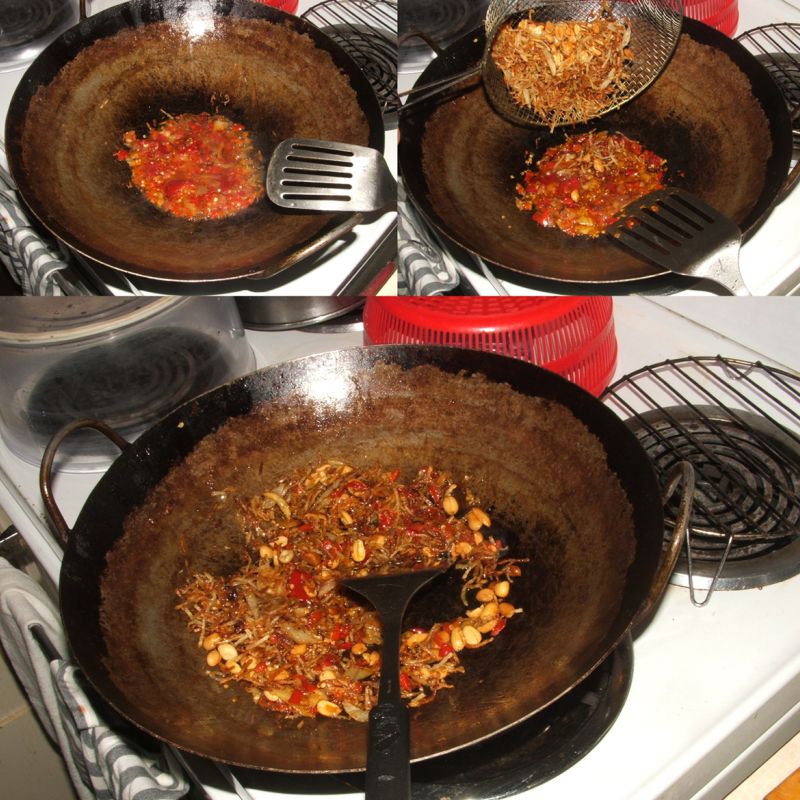 Keripik Kentang Balado (Indonesian Potatoes with Chile Sauce)
based on a recipe in “Tableful of Spice” by James Oseland, in SAVEUR No.58 (April 2002)

These potatoes are fabulous! 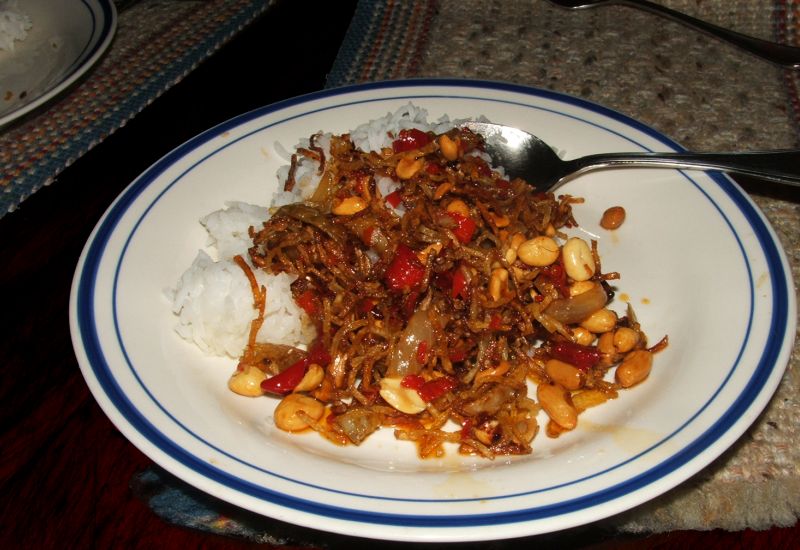 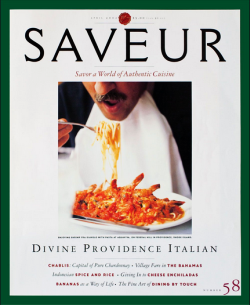 Amazingly, there is nothing officially from No. 58 on SAVEUR’s website. Might it have been infighting after the big shakeup (and demise, as far as I’m concerned) of SAVEUR a couple of years ago?? Goodness how sad.

The dizzying spread, more elaborate than any other I’ve ever encountered, includes gulai kambing (goat curry with coriander and cinnamon), ayam panggang (chicken cooked in a coconut milk curry, then quick-grilled), gulai hati sapi (beef heart curry), keripik kentang balado (crispy slices of fried potato with chiles), gulai tahu telur (tofu and hard-boiled-egg curry), daun singkong (boiled bitter cassava greens)-an antidote to all the pungent dishes, selada (cucumber and egg salad), gulai paku (wild fern curry), and gulai tempe (tempeh and long bean curry). […]
[B]alado] basically means anything that has been slathered with crushed red or green chiles. Although the Minangkabau are among the world’s most unabashed chile lovers, balado dishes invariably emphasize the main ingredient—be it a hard-boiled egg or slices of fried potato—not the heat. […]
My most memorable eating experience in Padang, it turns out, does not take place in a restaurant. Early one morning, Hassanudin and I are at the city’s huge, mazelike central market, where everything from shirt buttons to a kilo of miniature limes can be purchased. “Today I have something special planned,” he says as we attempt to trace the route back to the car. “We’re visiting Ibu Rohati, the cousin of my friend Arzein. She’s quite a good cook.” If the amazing aroma that greets us when we enter Ibu Rohati’s kitchen is any indication, Hassanudin is dead-on. For the rest of the morning I watch as this casually elegant woman quietly tends to the day’s culinary duties […] A few hours later, cooking completed, Ibu Rohati disappears, but she returns shortly, transformed from a housewife in jeans into an Asian princess in a fuchsia kebaya, hair piled high in snaky black coils. She drifts by, bearing to the table the fruits of her labors […]. Just before sitting down, Ibu Rohati leans over and whispers to me in broken English. “There is no secret here. Only love,” she says.

As I was leafing through Issue No. 58, I was amazed to see the memoire about Roy Andries de Groot, the author of “Auberge of the Flowering Hearth”.

It took a blind man to make me see the world in a different way. The man was Roy Andries de Groot, a food writer who was part of a sweeping changes in American cuisine that began in the late 1960s wiht the advent of food popularizers like James Bear, Craig Claiborne, and Julia Child. […] [O]nly one of his [eight] books remains in print [inspiring] scores, if not hundreds, of other writers and chefs. […] De Groot’s greatest book came about by accident. In an almost inaccessible village in the French Alps, researching the secret of Chartreuse liqueur, he found a small country inn run by two women who were passionate about cooking. He stayed there about a week, captivated by his hosts and their devotion to good foood. On the basis of that short stay, he wrote Recipes from the Auberge of the Flowering Hearth (first published in 1973). It is his most heartfelt work, an encomium to the idea of eating simply and well off the land.

But I didn’t discover this book from reading the SAVEUR article. In fact I confess that I don’t particularly remember the article – even though I know I read that magazine from cover to cover in April and May 2002. It wasn’t until I found the book on the cookbook shelf in my parents-in-law’s house when we were visiting T’s dad, who had been rattling around alone as a widower for 5 years in their beautiful house that still held lovely reminders of my mother-in-law’s presence. We borrowed the book then, and I treasure it now that we all spent several days clearing out the house, as T’s dad moved into a much smaller assisted living apartment that had no room for all those cookbooks.

2 responses to “Delving into the Archives: Indonesian Potatoes with Chili Sauce”