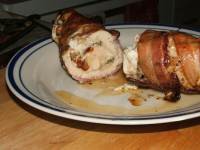 A couple of months ago, we saw someone on TV making stuffed chicken breast. She used cream cheese and herbs. We thought it was a great idea and decided to give it a try. Because we didn’t have cream cheese on hand and already had goat cheese in the fridge we used it instead. Along with the goatcheese, we put in the last of our stash of last September’s oven-dried tomatoes, green onions and some chopped basil leaves.

Well it was fantastic. We also served it cold a couple of night’s later and it was fantastic again. Although we decided that green onions were a mistake because they get a bit soft. But aside from that it was a keeper. I bet it would be good with cream cheese too but as long as we can get creamy goat cheese, that’s what we’re going to use. 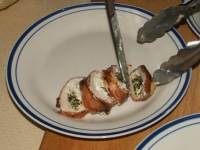 So when the hot spell in August hit, we had to make it again. Because we had no more oven dried tomatoes, we used basil pesto and capers. With fresh Ontario corn on the cob and potato salad, it was fabulous.

We loved it so much that we made it again to serve to friends, who agreed that it was indeed fabulous (even though they thought it was an awfully foofy dish for T to have prepared). That time, T added some toasted pinenuts to the goatcheese stuffing. Brilliant!

Here is roughly what T did. No measurements but that shouldn’t really be a problem. Just wing it.

Serve sliced, either hot or cold. This is great picnic fare!

I love this time of year! Huge bunches of basil with the root balls still intact have started appearing in big buckets at our local vegetable store. Just in time too… we’ve almost run out of last year’s frozen pesto!

Now if only the plum tomatoes at the vegetable stands were of the same quality as the basil, I could stop whining about no sun in our little garden….

17 responses to “It might be foofy but it tastes great! (Bacon-Wrapped Chicken Logs)”