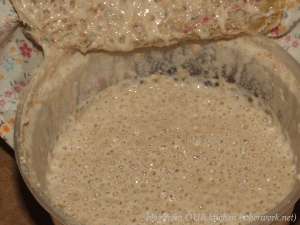 Nothing much happened yesterday with the culture. Some of the water separated and sat on the top and it pretty much smelled like nothing at all.

So I wasn’t really expecting much this morning and just casually decided to take a peek. It clearly went to town overnight, rising and falling. And whoa!! It’s really funky!!

It’s just a guess, but I think when things started really cooking, the sludge below bubbled up through that layer of liquid – the line of liquid is visible half way down the side of the container.

[A] dark crust may have formed over the top of the mixture, which is typical. Pull the crust back and note the aroma and bubbles caused by fermentation. In this initial stage, when the culture smells strong like stinky cheese and tastes sharply acidic, it is very ripe. Now it is time to do the first feeding.

I’m relieved that there is no dark crust. The smell is already enough to make me plenty queasy.

And then: “tastes sharply acidic”? Is he kidding? There is no way that I’m going to taste this!

I’ve taken Robertson’s word for it that it’s very ripe (as if the stink doesn’t tell me that already). 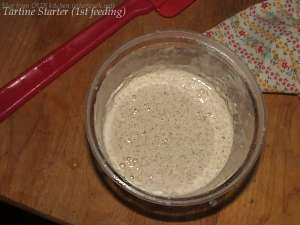 I weighed it on my trusty digital scale and removed 80%. Then into that stinking slough, I hand-mixed (literally) 50gm room-temperature water, 25 gm whole wheat flour and 25 gm unbleached all-purpose flour.

I have to say that it still smells just a little too cheesy for my taste. I’m guessing this is the Lactobacillus that shows up first – the kind of bacteria (supposedly benign, but it sure does stink this time round!) that will NOT raise bread.

It’s quite warm again in the kitchen today – I’ll check to see if it needs feeding this afternoon…. 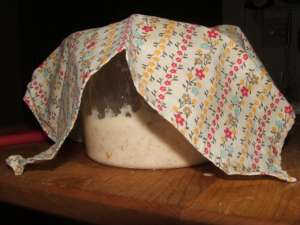 edit 09:57 21 June 2012: Last night around 21:30, I panicked that if I didn’t add some flour and water, we would be awakened by a horrible stench and the sound of burbling in the upstairs hall. The culture was bubbling and smelled of yoghurt. So, without discarding any, I hand-mixed in 30gm of water and 30gm of 50/50 wholewheat/all-purpose flour mix. This morning the mixture was foamy (why oh why didn’t I take a photo?!) and smelled strongly like yoghurt. I removed 80% to leave 50gm, then added 50gm water and 50 gm 50/50 wholewheat/allpurpose flour mixture. It now smells mostly like flour with just a hint of yoghurt.

T tasted the left-over sludge and said it tastes like acidic yoghurt (I’m afraid to taste it. I’m a wuss) and decreed that we’d make pancakes with it. (I’m not afraid to taste the pancakes.