We’re taking the “Two For Tuesdays” theme rather literally today and posting twice for the event… one post from each of us…. 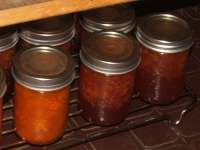 One of our fruit and vegetables stores is selling baskets of the most fabulous peaches. They’re exactly right for eating NOW. You know the kind. When you bite into it, you can’t stop the juice from running down your chin and arms.

I was raving about the peaches to my sister and she casually mentioned that she had made peach jam last year.

me: [awestruck] You know how to can??

she: [casually] I took a course.

me: I’ve always been terrified of canning. [whistfully] I wish I knew how….

she: [casually] Do you want to make jam this weekend?

me: [jumping up and down and squealing] Are you kidding?? Yes!! How many peaches should I get? do you want to make apricot jam too? we love apricot jam! there are apricots now too. we have some jars already. how many jars do we need? what do [more non-stop incomprehensible ectatic babbling]

So we jumped on our bikes and peddled furiously through muggy thick air the short distance to the “expensive” vegetable store that always has really good fruit in the summer. (We got spectacular sour red cherries from them a couple of weeks ago.) I got a basket of incredibly fragrant peaches (no idea what kind but they had reddish skins and were so ripe they were almost bursting) and some apricots. The tiniest apricots I’ve ever seen but they smelled the most like apricots of all the apricots at the various nearby produce sellers. Then I got some jam jars and a packet of liquid pectin because it was the only pectin that wasn’t laced with fructose and dextrose.

The next day (also steamy but not quite so bad – it rained that night), my sister arrived, armed with more jars, her canning utensils and her canning text book. My sister read the instructions out loud and made me mime some of the procedures before we dug into the basket of peaches to get started. 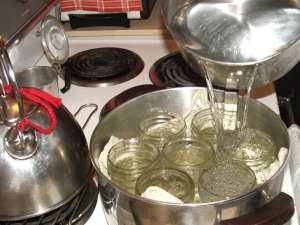 We pulled out a peach from the basket and then remembered we were supposed to be sterilizing the jars. (Hard not to eat the peach that we each had in our hands, but we were good….) We put the jars in the big stock pot and as we filled them, we realized that it really wasn’t deep enough to do the processing. (Oh Yeah!!! We already ran into this problem before, when T made peach chutney !!) An emergency phone call next door to talk to an answering machine machine and then racing to the other side to knock franctically on the door produced a humungously large pot. (And about 5 minutes later, the other side offered us their giant size stock pot.) Excellent!!!

Now that we had the correct sized processing pot, we continued, back on track.

So there I was stirring, stirring, stirring and watching as the molten sugary peaches were getting closer and closer to the top of our small stock pot we were using to cook the jam. (Why on earth were we using that pot??!) But quick-thinking that we are, my sister took over the stirring, while I rummaged through the pot drawer to haul out the large stock pot that we WERE going to use for processing. My sister removed the pot of molten peaches (that were not quite bubbling over) from the burner and I put the larger pot on the burner. Then she handed me the other pot and made me pour the hot peach mess into the new pot.

I’m pleased to report that I didn’t spill any. And we were back on track.

Everything else about the procedure was brilliant though. Even though it took us three and a half hours to produce 8 little jars of peach jam. 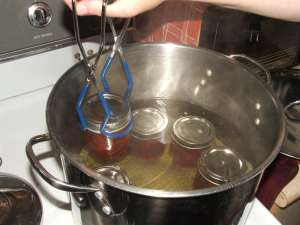 Because we then knew more about what we were doing, it only took us an hour and a half to produce 6 little jars of apricot jam. And after licking our fingers on what was left in the pot after filling the jars, we were determined to use LESS sugar for the apricot jam. And we did. In spite of the apricots be far tarter than the peaches. I was holding the sugarbag and tried to sneak by with scantly filled cup measures. But my eagle-eyed sister noticed and made me add a little more.

And still the apricot jam is very very sweet. 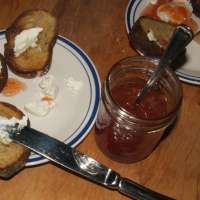 T and I officially tasted the peach jam the next morning (from the jar that was 7/8 full and so HAD to be eaten) on Tortano toast. Oh my!!! It’s insanely sweet!!! We tried cutting the sweetness by having it with goat’s cheese but the sweetness was too overpowering still. But the peach flavour still manages to come through. And it’s a beautiful colour. T thinks we should use it as a topping for cheese cake. It really does seem more like a dessert item.

Fascinating that the liquid pectin with zero sugar made for such sweet jam (although, of course, it has a lot to do with just how much sugar we added). I don’t know why but it never occurred to me that pectin would taste sweet!

Certo liquid pectin is produced in Mexico from lime peels. […] Pectin is an effective fruit-based glue. It is sweet but otherwise without prominent flavor. -ehow.com: about certo liquid pectin (ehow.com/about_6540769_certo-liquid-pectin_.html)

I gather that if you don’t care about whether the jam is loose, then you can use less sugar but if you care, it pretty much has to be 50% sugar, 50% fruit.

We rode to Canadian Tire on Sunday to get the canning implements. Alas, I didn’t see “light fruit pectin crystals” there. Even though I’m a fan of using things with zero sugar, I have a horror now of liquid pectin.

I looked at a Canadian Living Peach Jam recipe and see they call for “light fruit pectin crystals”. I wonder if there is less sweetener in that. I don’t remember seeing that choice when I was looking at all the pectins.

But yes. Definitely more research is required! Because, now that the procedure isn’t terrifying, I will be doing more jam making! I’m considering experimenting with zero pectin and adding apple or cranberry instead.

Even though the internet is absolutely full of excellent instructions on how to put up jam, here is what we did (I found it quite informative to type out the instructions – it helps me to remember just what we did):

Procedure for Making Jam
based on the instructions in “Bernardin Complete Book of Home Preserving”, edited by Judi Kingry and Lauren Devine

Store jars in a cool dark place. Eat the contents within a year.

» Read through all steps of the procedure and recipe before plunging ahead.

» It’s a very good idea to check all utensils, ensure that your pot is deep enough and to wash jars and lids before beginning.

» Bonafied preserving jars can be used and reused as long as they are undamaged. The screwbands can also be reused. However, under no circumstances, should the disc lids be reused. The seal will not be secure.

You don’t want to know what quantities we used. The sugar amounts were wrong wrong wrong. When I make jam that is more in keeping for breakfast than dessert, I’ll be sure to post the quantities we use. Because I will be making more jam! Probably this week.

But. One thing that I found fascinating. My sister was absolutely adamant that we use lemon concentrate that comes in those containers that look like plastic lemons rather than actual lemon juice. Apparently, the acid level varies drastically in actual lemons, making it difficult to know just how much lemon juice to add for safety. (I gather it’s the acid that is the main preservative.)

We didn’t use “real lemon” though. We think it’s vile. Instead, we used Sicilia lemon juice that actually tastes and smells like lemons.

This event was created by Alex (A Moderate Life) with the idea that each “Two for Tuesday” post would contain two things (two recipes, two links, two variations on a theme… as long as the post is about real food. Alex, Heather (girlichef) and an increasing number of bloggers have joined forces to co-host the weekly event. Heather wrote:

High 5! I did it!! Learning how to can has always been on my list of things to do. A few years ago, T made peach chutney without having all the correct equipment. But I was absolutely terrified of it and desperately needed someone to hold my hand on my first attempt. It turns out that it’s EASY and no hand holding is required!! (It is really fun to have a second person in the kitchen though, not to mention that with actual canning utensils, the process was considerably easier and far less intimidating.)

Ha!! And now I am an expert at canning. (Please reassure me that I don’t have to say that I’m joking.)

Heh. I was just looking again at Alanna’s (A Veggie Venture) Practical Home Canning Tips and am reminded of one last thing: we didn’t have a metal insert to keeps the jars upright during processing. We discussed it at length, trying various cooling racks and vegetable steamers that didn’t work at all. So I stuck a tea towel down into the bottom of the pot. And that seemed to do the trick. Today, when I was at the hardware store to see if they sold these inserts, the fellow said that his mother always arranged lids on the bottom of the pot and rested the jars on the lids. That might work!! What do you think?