summary: bookmarked recipe for pineapple cluster based on a recipe on the King Arthur Flour (KAF) site; if I choose the “gram” version of the recipe, I expect to see gram measurements, not volumes! (click on images to see larger views and more photos) Not long ago, fellow BBBabe, Lien (Notitie van Lien) posted this beautiful photo of the Hawaiian Buns she made using a recipe on the King Arthur Flour website.

Of course, I immediately bookmarked it. And then the next time we were at the supermarket, I wheedled with T to convince him that we neeeeeeeded to buy tinned pineapple slices. And I promised him that I would use the juice to make pineapple rolls.

As it happened, I was going to a potluck reception and had promised to bring bread. What could be better than pineapple rolls made into a pull-apart loaf?

The default for the King Arthur Flour recipes is to display the measures in volume. But I really prefer to weigh the ingredients. Happily, KAF a handy device to toggle between volume and weight measurements!

Unbelievably, when looking at the grams version, the yeast is still measured by volume, as is the vanilla, as is the salt. The salt!!

KAF also has a handy Ingredient Weight Chart, which says the following:

For best results, we recommend weighing your ingredients with a digital scale. A cup of all-purpose flour weighs 4 1/4 ounces or 120 grams. This chart is a quick reference for volume, ounces, and grams equivalencies for common ingredients.

This handy chart does not list salt. Are they mad??

I know I’m not the only one who has stressed the importance of measuring salt by weight rather volume! Here’s just one of the latest passages I read:

Measuring salt correctly is one of the biggest challenges in cooking from recipes. Many recipes specify volumes of salt but not the kind of salt, and so don’t really tell the cook exactly how much salt to use. It’s always best to specify salt quantities by weight, not volume.
[…]
A good amount of salt is a weight equivalent to 2 percent of the weight of the flour: or, in volume measures, 1/2 teaspoon of granulated salt for every cup of flour.

There were a few other things about the recipe that gave me pause: the excessive amount of sugar, eggs and yeast, as well as the fact that it called for all-purpose flour. Oh wait, it called for a small amount of potato flour too.

But I just cannot make bread with white flour only! So I substituted by using whole wheat flour for the starter and substituting some of the egg with ground flaxseed and extra pineapple juice.

The KAF starter calls for a whopping 9gm dry yeast. However, I made an executive decision to put the yeast into the dough and leave it out of the starter entirely.

Soaking whole grains for a good long while before adding them to dough accomplishes a few things. First the hard grains soften, so you won’t have little hard bits in your dough. But more importantly, soaking (and the extra hydration it contricutes) activates enzymes in the grain, beginning the process of breaking down its starches into sugars that provice food for the yeast.

“[S]oak” the […] whole-grain flours before the fermentation begins; this softens the bran (making for a more voluminous loaf) and begins the breakdown of the starches into sugars (deepening flavors and color). 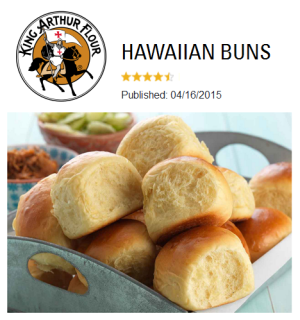 Here is KAF’s Hawaiian Buns recipe and here’s what I did to make it:

If you like warm bread, reheat it after it has cooled. To reheat any UNsliced bread, put the oven at 400F for 5 minutes or so. Turn the oven OFF. Put the bread in the hot oven for ten minutes.

Serve this bread with butter. Or cream cheese. Or goat cheese. Or crabapple jelly. Or smoked salmon. Or….

1.) Soaker Flour The KAF recipe calls for unbleached All-Purpose Flour in the first step. I decided to use 100% whole wheat flour instead.

2.) Eggs The KAF recipe calls for “2 large eggs plus 1 egg yolk, white reserved”. At the price of freerange eggs, I decided to use one egg only and substitute the rest with with ground flaxseed, baking powder and pineapple juice. Not to mention that I’m terrified of making bread with an eggy taste. Here’s what the internet says about egg substitution:

If eggs are leavening agents, Buttermilk, Yogurt, Baking Soda […] can be used.

Pineapple juice We had extra pineapple juice, so I decided to use it instead of water in the egg substitution. Normally, the amount of liquid for substituting an egg is 45gm. I added a little extra juice to substitute the liquid that would have been added with one egg yolk.

4.) Yeast The KAF recipe calls for “1 tablespoon instant yeast, SAF Gold instant yeast”, whether looking at the recipe with measurements in Volume, Ounces, or Grams (!). This works out to 9gm, which may be the correct amount if all the sugar and eggs are added but seemed really excessive if reducing those other ingredients as dramatically as I did.

5.) Water The KAF recipe seemed to be on the dry side, even after adding extra pineapple juice. So I added more water, naturally, not using water from the hot water tap. Instead, I heated the water in the kettle. You should do the same thing…. If you are allergic to using a thermometer, you can check the temperature by putting a few drops of water onto your wrist: if it feels warm, it’s too warm; if it feels cold, it’s too cold; if it feels like a cross between cool, warm and nothing, then it’s fine. Please note that before the yeast is added, the liquid temperature must be BELOW 120F (49C) because yeast begins to die when the temperature is higher than 120F. 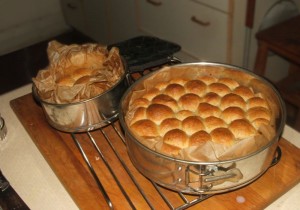 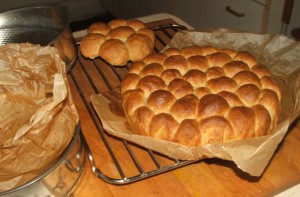 I made two pullapart loaves: one large and one small. I wanted to make sure that I got to taste the bread! 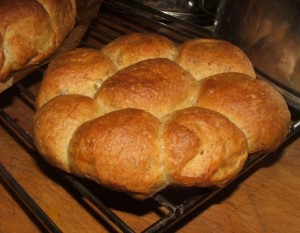 We tested the pineapple rolls on Sunday morning and they were fabulous! The most surprising thing about them was that they smelled wonderfully of pineapple with the faintest hint of vanilla. Yet the pineapple flavour disappeared entirely in the taste.

Not caring that there was no pineapple flavour, T said, “This is MY kind of bread. Make these again!”

I took the larger pull-apart loaf to the reception, where someone promptly cut a wedge out of it, like a pie!! (Is it possible that pull-apart loaves are particularly uncommon?) 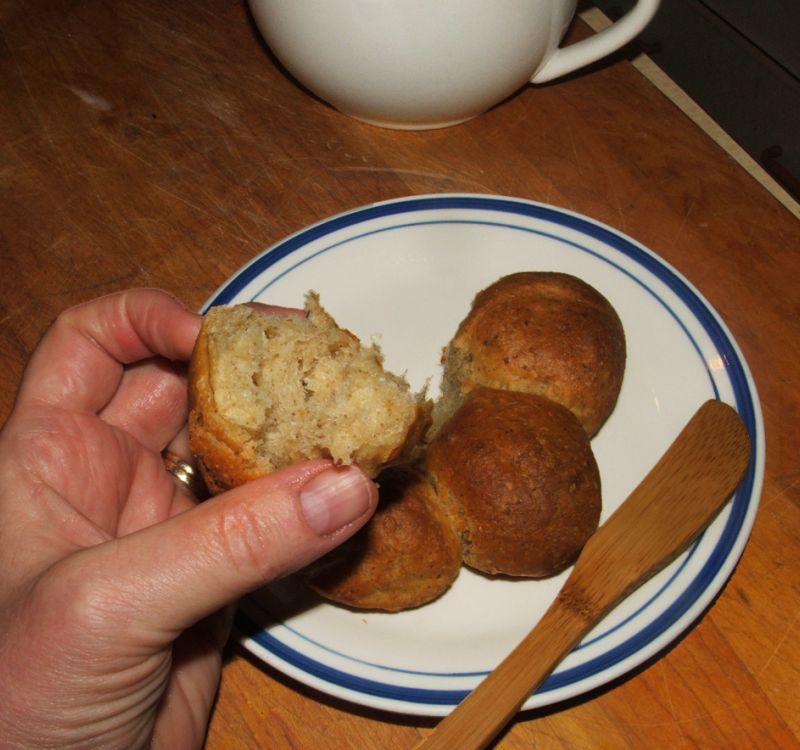