click on image to see more photos of kalonji 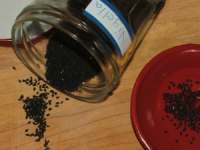 When Barbara (author of “Tigers and Strawberries”) announced that she was starting a Spice event and that the first version was to be “ancient spices”, I was very excited. We had just been eating the most wonderful Indian dishes that featured nigella seed. What could be more fitting for this event?

And ancient? I’ll say! I didn’t know for certain that it was indeed ancient, but after googling, I’m pretty much convinced that it has been used for eons.

It is mentioned in the book of Isaiah in the Old Testament, contrasting the reaping of ketsah (Hebrew word for nigella seed) with wheat.

When he has levelled its surface, does he not scatter dill, sow cummin [Hebrew word is ketsah], and put in wheat in rows and barley in its proper place, and spelt as the border?
Isaiah 28: 25-26

cultivated in India, Bangladesh, Turkey, the Middle East, and the Mediterranean basin and has been used through the ages for culinary and medicinal purposes.
Nigella sativa […] has been traced back more than 3,000 years to the kingdom of the Assyrians and ancient Egyptians.

We were reminded about the use of kalonji while reading about making Bengali curry in Mangoes and Curry Leaves by Jeffery Alford and Naomi Duguid. (T’s eyes glazed over and he interrupted the reading to say how fabulous Bengali fish curry is and that he would make it for me. I’ll post soon about the Bengali Fish Curries we’ve been feasting on).

And so we went in search of it at a nearby Indian grocery store, Bombay Trading. When we asked if they had kalonji, the clerk said, “wild onion seed? Yes, of course…”

However, nigella seed is not in the onion family at all. Alford and Duguid write that it comes from a plant closely related to Queen Anne’s Lace (Daucus carota). And the following is an excerpt from Herbs, Spices and Flavourings by Arabella Boxer, Jocasta Innes, Charlotte Parry-Crooke and Lewis Esson:

Nigella is […] of the buttercup family. [It] grows wild and in cultivation in central and southern Europe and Asia. […] The seeds’ earthy aroma, faint until they are rubbed or bruised, is slightly reminiscent of carrots or nutmeg and they are peppery, bitter and crunchy to taste.

But the wikipedia article has a different idea of the flavour:

Kalonji has a pungent bitter taste and a faint smell of strawberries. It is used primarily in candies and liquors.

click on image to see more photos of onion pilau 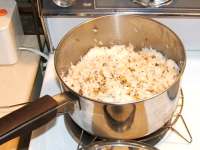 It does have a distinct, delicate, somewhat smoky flavour. I’m not sure that it is really reminiscent of carrots or strawberries, but as soon as I tasted it in a simple onion pilau, I knew I’d had it many times before.

Cumin seed is also a nice addition to pilau. And raisins. And green peas. And cashews…. Use your imagination!

Kalonji adds the most wonderful dimension to western as well as Indian food. I love the crunch and slightly wild earthy taste. We recently added some to Bubbly Squeak (potatoes and kale) and it was the best ever.

And onion pilau is wonderful. But I have to say that Bengali fish curry is really outstanding and kalonji is one of the ingredients. I’ll post soon about Bengali fish curry and after you read about it, you’re going to have to try it. It is fabulous.