summary: recipe for Karma Beet and Coconut Soup, based on a recipe in the accompanying cookbook for Monica Bhide’s novel, “Karma and the Art of Butter Chicken”; substitutions and/or additions; book review;

KARMA AND THE ART OF BUTTER CHICKEN by Monica Bhide 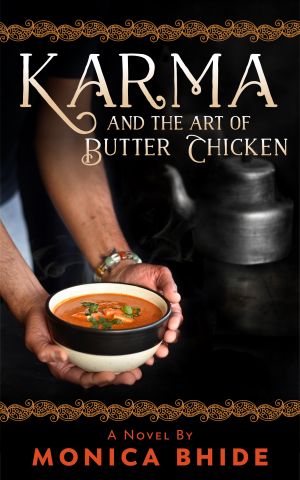 This book that is reminiscent of a Bollywood Movie (I could almost imagine the dance sequences!) is a fun light read, in spite of its underlying serious message reminding us of the inordinate number of people in the world who go hungry and how we well-fed ones treat them.

Yes, you’ll have to suspend your disbelief from time to time, but the interesting twist at very beginning with “taste of childhood” and the silliness of reality TV show, as well as the descriptions of the actual kitchen make it well worth reading the book.

On her site, Monica offers the following:

[A] free eCookbook specially designed and developed for the readers of this book […] has dishes Eshaan (and other contestants) may have cooked for the various cooking contests: roasted beet soup, Mango salsa and calamari, Scallops with coconut curry dip.

And, of course, considering that Butter Chicken is in the title of the novel, and that there are wonderful descriptions of the dish in the book as well, her recipe for butter chicken is included in the Bookclub Cookbook.

[When Eshaan was a child,] Mama Kavya had taken a job cooking and cleaning the house for the local doctor. […]The doctor’s family let Kavya and Eshaan eat one small meal a day there. Warm breads, a bowl of gingered lentils, and a small raw onion was their princely treat. Once, the lady of the house let him try a chicken nestled in a deep crimson butter and tomato curry
[…]
“This dish . . . my mother cooked at the home of a local landowner when I was a child. […] Now, with your permission, I would like to take a bite before sharing this with you. I haven’t tasted it in twenty years.”
Only a handful of people watching Eshaan take that first bite understood the significance. It was a rebirth; the son had found his mother again. […] He put down his tasting spoon then handed each judge a small bowl of the butter chicken: a luxurious dish of spiced chicken in a butter-tomato sauce.
“This, to me, is the dish of hope, because it promises better things ahead and that there is always a way forward. Always.”
[…]
“The test of a good chef is not how complicated a dish he can make. But how he can make the dish sing with simple flavors and simple ingredients,” Judge Singh said

I have to admit that I adore T’s recipes for Tandoori Chicken and butter chicken. And now that we know how to easily infuse smoke into a sauce – even in the heart of winter when the barbecue is covered in snow, we decided not to try Monica’s Butter Chicken. Of course, I’m sure it’s lovely, but we just cannot bring ourselves to make butter chicken without barbecuing the chicken and using our own spice mixtures instead of “Tandoori/Tikka mix”.

It was soup that really intrigued us. There is a wonderful sounding cabbage soup at beginning of novel:

“Oh, look at this breakfast. I am impressed, Eshaan. Sesame brittle and oh, what is this dish? I don’t know it.”
It is a spicy soup with mustard greens, radish, onions, garlic, and shredded cabbage. The monks tell me it is a cure-all for anything that ails you, ‘specially old age!” he replied with a big smile as he ladled the piping hot soup into large bowls. 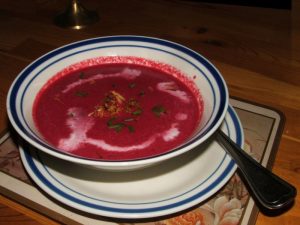 Alas, the cabbage soup recipe is not in the accompanying cookbook. However, Monica does include a lovely recipe for beet soup that I confess I don’t remember seeing in the novel itself. And she also suggests serving it as an appetizer in shot glasses.

But who cares? It’s delicious in big bowls for lunch!

:: BEETS: Monica suggest wrapping the beets in “a large piece of aluminum foil” and to “Wrap tightly to keep steam from escaping”. Using a big piece of aluminum foil seemed unnecessary and we didn’t mind the idea of some of the pieces of beet becoming caramelized. (In fact, we were a little disappointed that they didn’t)

Another time, we didn’t have any coconut milk OR chives (it’s winter, after all…) left so substituted with the oil that the ginger had been fried in. 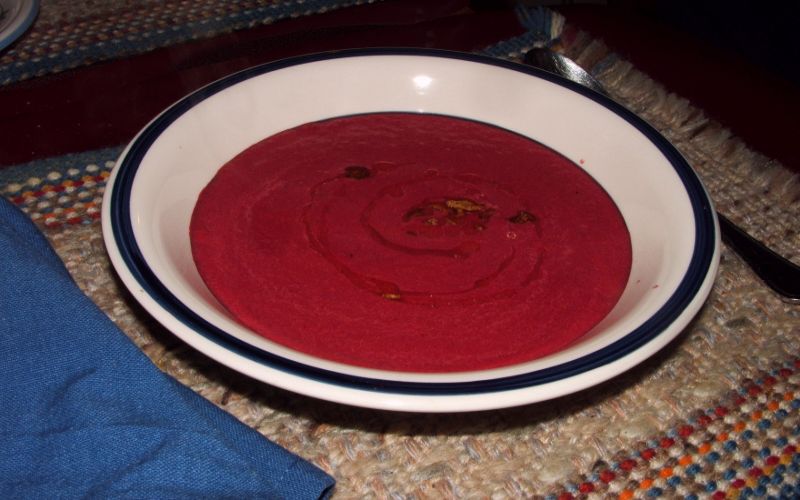 KARMA AND THE ART OF BUTTER CHICKEN by Monica Bhide 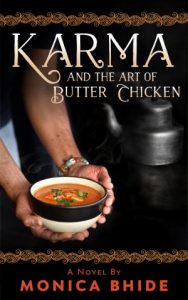 Recipes and ideas that aren’t included in the Bookclub Cookbook but do appear in the novel: cabbage soup, sesame brittle, oil-rubbed chicken wrapped in dough cooked in a pit, rice kheer “the magical dish of blessing and comfort, a combination of rice, milk, sugar, and his homemade rose petal syrup”, Loveleen’s special coffee, etc. etc.

Loveleen laughed as she heated two small pots, one with a small amount of milk thinned with some water, and the other with whole milk. […]
“Here is where the magic happens, and we whip, and whip, and we whip,” she remarked in a singsong tone to an old Bollywood melody as she used a whisk to dissolve the coffee into the milk. […] Loveleen opened a cupboard and took two cardamom pods out of a small jar. She crushed them gently with her fingers and opened them. The pods revealed their sticky little brownishblack seeds. She popped them into a mortar and pestle and ground them while singing, “And we crush, and we crush, and we crush,” and then sprinkled them on one of the finished coffee cups.

He could still see his father seasoning, massaging a whole chicken with a very smelly oil. As a child, he failed to understand why the chicken and he would be massaged with the same oil, since Mama Kavya massaged that oil into his head at least three times a week. Although his memory of the dish was fading, he did remember his father would throw in different colored powdered spices and large amounts of red chilies onto the chicken, then seal it in flour dough. Then came the best part, the part Eshaan loved as a child. Papa Prakash would give him several newspapers and tell him to wrap the chicken as best as he could. They would dig a deep hole, place in some smoldering coals, and then add in the covered chicken.
Eshaan and his mother would help cover it with dirt. “It is all about the fire. Good cooking has everything to do with controlling the fire,” Papa Prakash often said.
As if by magic, at dinnertime, when they removed the dirt, the newspaper would be burned off, and the dough and the chicken inside it would be fully cooked.
“To cook well, always respect the earth and remember where your food came from,” was the mantra in the house.

I contacted Monica Bhide to learn what kind of oil it was for the above chicken and she confirmed that it was what I suspected: mustard oil! Wow. You’d think that would hurt! 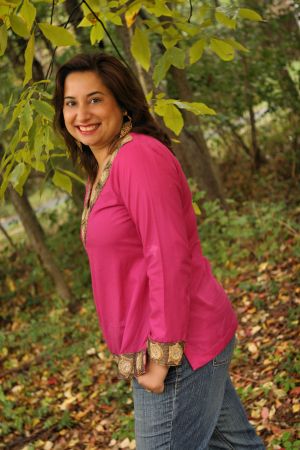 Monica Bhide is an award winning writer, accomplished literary coach, gifted poet, storyteller, and educator with a lyrical voice and universal appeal. As a bestselling fiction and internationally renowned cookbook author, Bhide is known for sharing food, culture, mystery, and love in her writing. Having roots and experience in many places, Bhide inspires readers everywhere with present day stories which transcend cultural, chronological, geographical, economical, and religious borders. 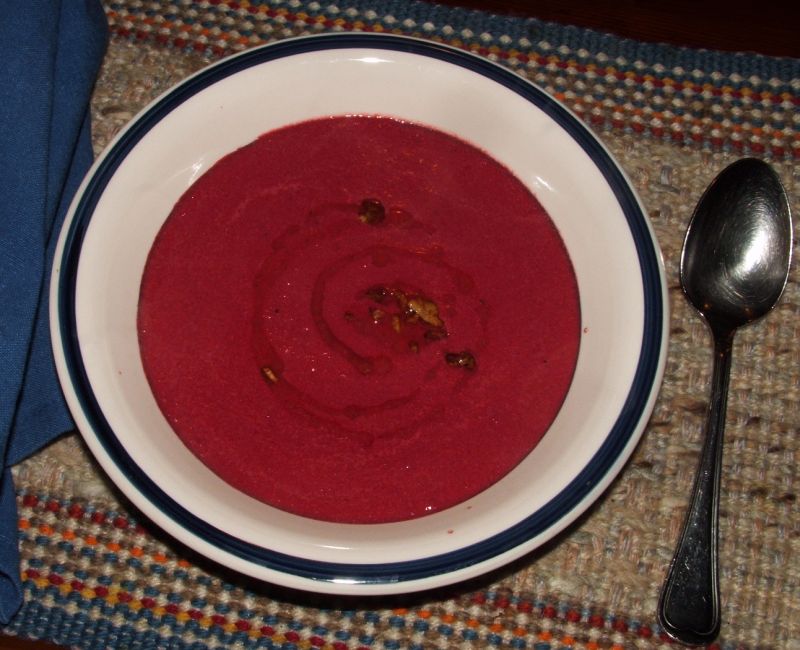 2 responses to “Eating from the book…. Karma beet and coconut soup”