summary: Cafe Latte made in a Vesuviana Coffee Maker; Kona coffee from Hawaii; (click on image to see larger views and more photos)

On Saturday, it was so beautiful out that we had to go for an early morning bike ride. We rode through the neighbourhood, remarking on all the irises in almost every garden (they’re amazing this year!) One of the streets was having a lawn sale festival. Several houses had all kinds of wonderful (and not so wonderful) items for sale. After visiting about 8 lawns and not seeing anything we wanted or needed, we were getting tired of the game and decided to go to just one more lawn.

Bingo!!! Isn’t it interesting that it really is the last place you look that you find things? 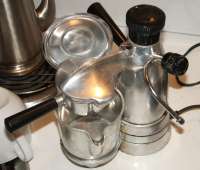 We were just getting back on our bikes when I noticed something shiny on a low table. Something shiny and very interesting looking. Much to T’s chagrin, I got off my bike and hurried (in a casual sort of way) over to the table, calling for him to follow me.

A closer look at the shiny gizmo and I said in a hushed voice, “Is that an espresso maker?”

The vendor strolled up, sipping from her giant steaming coffee cup. She was very enthusiastic and raved about how well it worked, how great the coffee was, how quickly it made coffee, that it was in perfect working order.

Looking at the cup in her hand, I laughed and said, “And you’re selling this because you never drink coffee anymore, yes?”

To my surprise, it turned out the “coffee” in her mug was herbal tea. She never drinks coffee any more.

Casually, oh so casually, I asked her how much she wanted for it. Here’s how the conversation went:

he: I don’t know. Where would we put it? Let’s go! (heading back to the bikes)

me: Wait!! (frantically wheedling) I think we should get it. I’d love to have a steamer for frothing milk!

me: (defiantly reaching for wallet) I’m getting it! 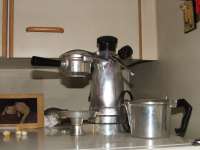 We really don’t have a lot of room in our kitchen for gadgets and weren’t sure where to store this. Then we realized the top of the fridge is the perfect location! The coffee maker is out of the way but still on display.

Since taking this photo, we realized that it’s better to store the basket detached from the machine and put the coffee pot on its stand. (I know, I could just take another picture but I’m lazy and want to post this now….)

And when we want to use it, it’s very easy to lift it down and onto the stove.

It’s very simple to use; the only drawback we have found so far is that there is no “on/off” switch. After filling the reservoir with water, and the basket with coffee (tamped down with a measuring cup because we don’t have a tamper), the Vesuviana is simply plugged in to get it started. In about 5 minutes, the water reaches the correct temperature and is pushed through the arm over the ground coffee and into the coffee pot. A sensor in the reservoir tells the coffee maker to stop sending hot water into the coffee pot, leaving water in the reservoir for steaming.

The first time we tried the coffee maker, we steamed cream because we didn’t have any milk. Even with cream (especially with cream??), the coffee was fabulous! But we really wanted to try it with milk and went out immediately to get some…. And came back to make coffee again and steam cold 2% milk (apparently, it foams better if it’s cold). 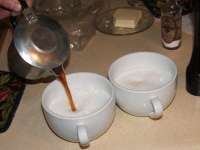 Now I understand why people with new espresso machines get addicted to coffee! It makes the best coffee!! In fact, we CAN’T stop making coffee!

I discovered later that T was as thrilled as I about buying the coffee maker. When he was crankily shaking his head and objecting, he had simply been playing the “bargaining game” and was trying to drive the price down by appearing not to want the Vesuviana. Ooops!! Because she’d asked only $7.00, I didn’t think the bargaining game was necessary. Now, if she’d said $30 or $50, that would be a different story…. 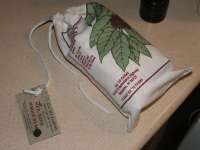 Our wonderful neighbours gave us a bag of delicious Kona coffee “Wings of the Morning” after going to Hawaii for a holiday! The beans are pesticide free and hand picked. Coffee made with it has a slightly dark warm flavour. And the coffee works out fabulously in our new coffee maker! (I love the cotton bag that the coffee beans came in too!) Thank you, J, T & L!

edit 15 June 2009, 12:30: Our next task will be to find a real tamper. Too bad we didn’t think to ask the lawn sale woman for her tamper…. Because, I’m amazed to learn that tampers can cost as much as $100!! But I gather they’re really important for making the coffee. If the ground beans aren’t tamped (or is that “tampered”?? :lalala:) down evenly and firmly, there will be room for water to whoosh through, thus making insipid weak coffee. And nobody wants that! 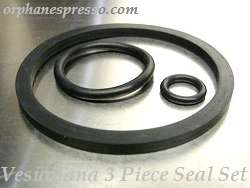 Thanks to a commenter on our YouTube video, we learned about orphanespresso.com’s Vesuviana Espresso Maker 3 Piece Seal Set that is available for a very reasonable price. We ordered a set and it is now in the cupboard, all ready to go. Just in case.