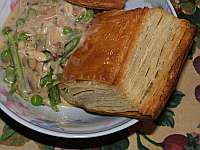 Sometimes I think that we like having Christmas dinner just so we’ll have leftovers to make chicken sandwiches and chicken a la king (not to mention chicken stock for risotto, paella and/or soup).

After this year’s Christmas dinner, we had TONS of vegetables left over: steamed peas, carrots, green beans and oven roasted parsnips.

On Boxing Day, as we were making chicken sandwiches for lunch – chicken sandwiches with leftover oatmeal dressing (or stuffing, if you prefer), orange fennel salad and parsnips… mmmmmmm (Trust me; leftover salad in a sandwich is fabulous! And trust me again; oven-roasted parsnips are even better the second day in a sandwich than they are on the actual dinner – and you know they’re phenomenally good for the dinner so make extra!)

Now where was I? Oh yes, in the middle of a sentence. I’ll start again.

As we were making chicken sandwiches for lunch, we talked about what we should do with all those extra vegetables. As I began to suggest adding them to chicken a la king, T suggested the same thing. Bingo!! Excellent suggestion!

Sometimes I think that we like having Christmas dinner just so we’ll have leftovers to make chicken sandwiches and chicken a la king (not to mention chicken stock for risotto, paella and/or soup).

Apparently, puff pastry is dead easy to make. (I confess that I have never made it. T has though and it’s fantasticly good.)

Just as he did last year when making chicken and ham a la king, T made his chicken pie filling adding ham, béchamel (made with milk that had been infused with onion and a bay leaf from our bay tree overwintering in the basement) and sherried fresh mushrooms as well as dried portobello mushrooms that had been presoaked in a little boiling water then sliced. The dried mushrooms were a great addition!

To make sure the peas, carrots and green beans (no parsnips left – we finished them in our sandwiches) didn’t get overstewed, we made the bechamel and mixed it with the chicken ham and mushrooms first. Then we added the vegetables at the last minute and re-cooked them just long enough to heat them up.

Today is the last day of Christmas! (I suppose you imagine that I’m going to make King cake?