click on image for more photos of making buns 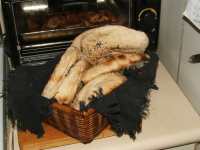 The other day, as it was hot outside, we decided to make focaccia on the barbecue. I always add some whole wheat flour to focaccia dough and as I was kneading it, I was thinking about Kevin Weeks’ (Seriously Good) whole wheat hamburger buns.

And so in a sudden change in direction, I thought we would make buns instead. How badly could it turn out?!

At 4:00pm, I made the focaccia dough. I chose not to add garlic powder or black pepper to the dough though… even though Kevin assured me that the garlic powder doesn’t give the buns a bitter flavour… maybe next time….

click on image for more photos of shaping the dough 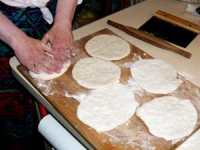 After the dough had risen on the counter (by about 6:30pm), instead of shaping it into a rectangle and putting it in an oiled pan, I divided it into 6 balls and we either rolled or flattened them with our hands.

We each shaped three… T scoffed at my rolling pin and used his hands only. He prefers the really rustic look. And then we sprayed the discs with water and added sesame seeds to all and nigella seeds on two.

We heated up the barbecue and put them on the grill and closed the lid. It took virtually no time at all for them to puff up and to turn them over. Amazingly, the seeds stayed put!

click on image for larger view of the hamburger 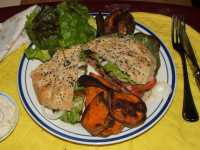 And the buns made great hamburgers. The bread was tender and fluffy inside and nice and crusty on the outside. (Too bad our oven roasted potatoes and sweet potatoes got away from us and got just a little too charred.

But they were still good!)

Next time, we might try making the buns a little thicker. Then again, we might not. They were awfully good as they were.

2 responses to “making buns on the bbq”