I bragged earlier that I was famous. Here’s how it came about:

In August, I received an email from Hayley Mick asking if I would do a telephone interview about how “rising food prices (particularly when it comes to grains, flour etc) are affecting bakers” and whether “it put a damper on [my] productivity“.

Her email came just at the time that we had ridden our bikes all over Toronto trying to find rye flour and learning that “Five Roses” (now owned by Smucker Foods) has discontinued production of “dark rye” flour due to slow sales.

I was also miffed that the brand-name flour companies were charging pretty much the same for unbleached all-purpose flour as Loblaws/Weston was for their “no name” brand. For 10kg of wholewheat, or unbleached all-purpose, it is roughly the same price, no matter what company is chosen: around $13. Even the high-end US “King Arthur” mail-order flour that in the past was easily twice the price of other flour brands, costed the same amount as “no name”!

So I was happy to give the interview, excited at the idea that perhaps “no-name” would be outed as being just another brand-name. Perhaps they might be shamed into reducing their prices. (I’m pleased to report that for whatever reason, no-name unbleached all-purpose flour has recently lowered in price. The other day, we bought a 10kg bag for $9.99.)

Hayley’s first question (as I recall) was whether I had stopped or reduced the amount of bread baking because of the high prices. I said that it was exactly the opposite. It’s much more cost-effective to make one’s own bread.

But I did have to say that it was quite possible I would have to stop or reduce drastically the making of any bread that used rye flour. We chatted for about half an hour and at the end of the interview, Hayley asked if they could send someone over to photograph the bread making process.

Sure, why not? (Eeeeeeek!!!!) They suggested the following day, which I nixed. The day after that was agreed upon.

And I bet you can guess what I did! Yup. I scrubbed and polished the kitchen from top to bottom. Including the windows. And the glass lamp shades over the sink. Making sure to rearrange everything with studied carelessness so it wouldn’t look like I had spent the day scrubbing and polishing from top to bottom. And just as I thought I was done, I noticed our wine glasses that hang upside-down under the cupboard. They were covered in dust. Aaaaaauughhhhhhhhhh!!! That was close!!

As I worked, I waffled about what bread I would make the next day. My chorus as I scrubbed the floor was

Because there was a request for baked bread as well, I pulled a multigrain loaf out of the freezer, as well as two hamburger buns for our dinner that night. And I finally decided: I’d cut open the multigrain but I’d make wild bread because I wanted to show off my new scale, kneading slack dough and my wild yeast.

The next day, late in August, the Globe & Mail photographer Deborah Baic arrived a little after 10:00am and took many many photos as I measured flour, stirred and kneaded wild bread. Of course, I worried about the fact that the starter might have over-risen. Under normal circumstances, I would have been mixing this about two hours earlier. 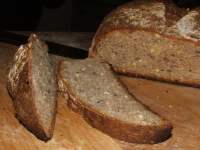 After I had kneaded the dough (which was feeling quite wonderful), while we were waiting 20 minutes for the stretching and folding, I picked up the previously made multigrain bread, asking if Deborah would like some. She politely declined. I said that I hoped she didn’t mind if I had a slice (I was starving – I had neglected to eat breakfast in my flurry of last minute fussing and tidying of the kitchen!) As I sliced open the bread. Deborah exclaimed, “That smells great.” I asked again if she would like a slice. She smiled happily and reached for a slice. And it was so good (even if it is me saying so) that we both had another slice each.

Deborah couldn’t stay (of course) to photograph the resulting bread, nor could she return that evening or the next morning because she (lucky her) was flying to France that evening. Silly me, I didn’t think to ask her if I could see the proofs she took and these are the only ones I have from the day – gleaned from the published article online.

As Deborah left, I asked if she’d like to take another slice of bread for the car. She hesitated, then reluctantly declined. And off she headed to pack for her trip to Europe. I couldn’t help but think about all that wonderful bread just waiting for her when she got off the plane in Paris the next day.

At around 4:00pm, when I expected to be able to shape the bread, it hadn’t risen nearly as much as I expected. At 5:00, it was still at the same level. Augh!!! Good thing Deborah wasn’t returning to photograph the finished loaf, was all I could think of. And so much for showing off.

At 6:00pm, the dough was still at the same level. I tasted the dough and thought it tasted awfully salty.

Here are the proportions:

I don’t think I miscalculated the salt quantity, did I?? 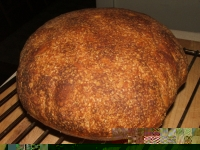 I don’t THINK I added too much salt! (Did I??) So I just shaped the bread in one big round and hoped for the best. It didn’t really move all that much in the next couple of hours so, disgusted and disheartened, I decided to bake it. And was flabbergasted that I got such oven spring! 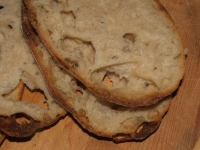 And even more flabbergasted the next day when we had it for dinner with herbed olive oil, green and yellow beans and a grilled chop. It was really quite good, with beautiful holes. And it didn’t taste too salty at all. Go figure.

I’m completely in the dark about what went wrong. If the resulting bread hadn’t tasted fine, I’d be inclined to toss my wild starter entirely and just use commercial yeast. It’s beginning to create toooooo many anxious moments.

Thank GOODNESS Deborah had to fly to France and couldn’t come back to photograph the loaf! It’s much better for me that I appear to know what I’m doing in the article, isn’t it?

Yup. I’m famous! Okay… make that was famous! So what if my fifteen minutes is up. All in all, in spite of the lame headlines that seemed to have little to do with the original intent of Hayley Mick’s article, I couldn’t be more thrilled.

On the day that the article came out, one of my friends called to exclaim about me being in the paper. She kindly mentioned how great our kitchen looked. I mentioned that I had gone nuts with the cleaning, knowing that it was unlikely that anyone would have noticed if I hadn’t done the scrubbing. Laughing, I told her about my panic attack with the glasses. And you know what? She said that was the FIRST thing she had noticed in the photo. She asked when we had put them there. Ha. Probably the first year we moved into the house and she has been in the kitchen zillions of times since. In fact, I think we have a photo (pre digital camera days) of her standing right beside the very same glasses.
This post is partially mirrored on The Fresh Loaf