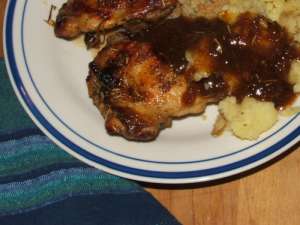 After tasting our homemade marmalade, we decided we never wanted to eat commercially made marmalade again. We had some leftover in the fridge though. It was still fine and not nearly dull enough to simply throw away. So we decided to use it for cooking. There was an intriguing marmalade chicken recipe in the LCBO’s magazine Food and Drink (Winter 2011).

Why, yes, we even use our toaster oven to make toast. Of course, a toaster oven is not fabulous for making toast. But sometimes, sacrifices have to be made.

I got my first toaster oven one hot summer day years ago, when I still lived on my own in an un-airconditioned apartment. Toaster ovens are THE way to go. They use up much less energy than a big oven. They cool off quickly as soon as they’re turned off. They take up relatively little room on the counter.

They are arguably far superior to microwave ovens – crispy things don’t go mushy when reheated in a toaster oven.

We will be absolutely devastated when our old toaster oven claps out and we have to buy a new one. We’re not at all looking forward to having an oven that has a computer. We just want switches and dials.

But enough of that… back to the marmalade chicken….

Roasted Marmalade Chicken This dish has huge flavour, making it a real winner for a dinner party.

If our rosemary plant in the basement hadn’t kicked the bucket sometime in early December – a record for me – it usually dies in November, we would have used fresh rosemary. (It drives me crazy that I cannot seem to keep rosemary alive!! Alas. It appears that I really do have a black thumb.)

We substituted by using less colourful dried rosemary instead. Luckily, dried rosemary still tastes like rosemary. (I know that we could have bought beautiful looking fresh rosemary from one of the vegetable store but I’ve already ranted about the faded flavour of fresh herbs in winter.) 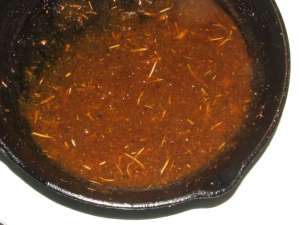 The sauce is made with onions, chicken stock and a marmalade/rosemary/mustard mixture (using all those wonderful caramelized bits in the roasting pan). It was wonderfully sticky. It is reminiscent of Chinese sweet and sour chicken. But not at all gluey or gelatinous. Not to mention that the sauce is a lovely deep gold colour rather than lurid red.

So. Do you have some rosemary and some marmalade lying around? Here’s how you too can have marmalade chicken:

Sorry, no measurements. You’ll have to wing it. (To give you a vague idea, the magazine recipe calls for 4 chicken breasts, 50ml marmalade, 250ml of stock and 500ml of sliced onions….)

» If the chicken is cooked through but not quite golden enough on the outside, drain the pan (reserve the juice!!) and stick the chicken under the broiler for a brief time before reducing the sauce. 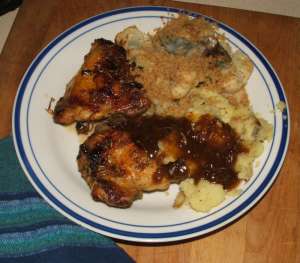 The magazine suggests serving the chicken with stir-fried carrots/parsnips and quinoa. We served our chicken with mashed potatoes and cauliflower au gratin. Dinner was is delicious.