summary: recipe for dosa made with dahl; reminder of those in need and that October 16 is World Food Day; list of some of the aid organizations working to feed the hungry; (click on images for larger views) 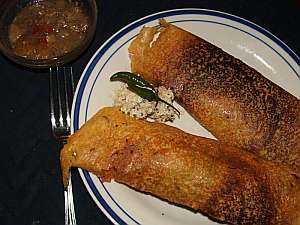 We made the most amazing breakfast not long ago: homemade masala dosa.

It was great dosa: thin and crispy and light, with potato stuffing, sambar (I confess I loathe sambar and refused to have any but T claimed it was delicious) and 2 chutneys: coconut and pear (yes, from all those pears I picked).

We had a little of the batter left-over and had sada dosa (plain) the next morning with coffee. It was reminiscent of socca (aka farinata) but instead of being made with chickpea flour, we used finely ground toor dahl that had been soaked overnight.

Next time we’re thinking we might try adding some rice. Or perhaps not because the dosas made with just dahl was stellar. And if it ain’t broke, why fix it?

The first time I had dosa was in a fly infested restaurant in Khajuraho. I remember being a bit afraid. I’d seen and the state of the tables BEFORE they had been wiped down with a greyish rag and how many flies were waltzing around everywhere. But the smells emitting from the kitchen were wonderful. So we stayed. The dosa was thin and crispy and light. The potato filling was perfectly spiced. The coconut chutney was wonderfully refreshing. It was everything a dosa should be. Except for the flies.

Serve immediately as is for sada dosa, or for a masala dosa, put the dosa on a plate, prettier side down. Put a spoonful of potato filling in the center and fold the dosa like a letter over top. Flip the filled dosa over. Serve with coconut chutney and any other chutney you like. A few extra green chillies are nice too. And of course, some people insist on sambar as well. 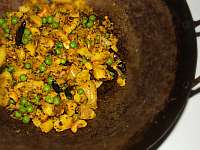 T made the most amazing potato filling with cashews. This was really everything a dosa should be. And the bonus was: it was served on clean plates and there were zero flies!!!

Remind me to post the recipes for the potato filling, the really fabulous coconut chutney that T made and the equally fabulous pear chutney I made. You neeeeeed to have them with your dosas.

As for the sambar… well, it’s just not something I crave but you might like to have it. T bought a sambar packet and doctored it by adding some of the potato filling (choosing the spiciest bits), a green chili and a little homemade tomato sauce (the kind we use to make pizza).

Whenever we eat Indian food, I can’t help thinking about our amazing trip to India many years ago. The sights and sounds and aromas and spices and colours. And the people! So many people! And we drank bottled Limka or Thumbs Up because Fresca and Coca Cola were unavailable. We were there when television for everyone was just been introduced and everyone stopped everything to watch Mahabarat, many standing at outdoor cafes because they didn’t have televisions in their homes yet.

How things must be changed now!

And yet, there is still distressing news:

Despite significant economic progress in the past decade, India is home to about 25 percent of the world’s hungry poor.

And as we know, just next door in Pakistan, the situation is much more dire.

I know what you’re thinking. You’re thinking about the fact that you just gave a donation after the devastating earthquake in Haiti. And your taxes have gone up. And fuel prices are rising. Which means food prices this winter will rise as well.

But then as you’re thinking about that, you might also think about what you paid for lunch when you decided to go out with office friends to celebrate the end of the week. And how you calculated that it came out to $12.50 and if you each threw in an extra $2.50, the waiter would get a nice tip and what’s $2.50 extra anyway.

Here’s my proposal. Next time you’re thinking about going out for lunch with your office friends, virtually invite one or two hungry poor to lunch with you by sending the price of their lunches to a reputable aid organization. Let’s start World Food Day early.

The theme of this year’s observance is United against Hunger, chosen to recognize the efforts made in the fight against world hunger at national, regional and international levels. 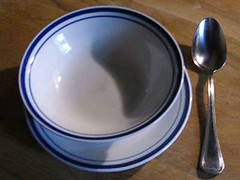 There are impoverished and hungry people everywhere in the world. And there are many organizations attempting to feed these people. Here are just a few possibilities. Please look in your community for others:

Please remember when giving your donations to ensure that the relief agency you have chosen already has operations set up in the area. Also, it’s a good idea to ask their advice about whether it is best to specify “greatest need” on your donation. They know best where the moneys really need to go.

Bloggers Against Hunger
Working together with the World Food Programme to fight hunger.

MATCH DEADLINE EXTENDED: All donations made from August 2 up to and including October 3, 2010 will be matched by the Canadian government through its Pakistan Floods Relief Fund.

More than 1,600 people have been killed by the floods in Pakistan to date. Hundreds more are missing and it is feared that the death toll will rise as continuing rains increase the threat of more flooding and the spread of waterborne diseases such as dysentery, diarrhea and cholera begins.

2 responses to “masala dosa and a reminder”