About Measuring and Common Ingredients for Bread Making

J’adore measuring; I am a fiend for it. (T is not. His idea of a teaspoon is any spoon he might use to stir tea and a cup is any cup he might use for coffee… however, for the recipes on this site, I have tried to pin him down about more specific amounts for any of the recipes he has created….) 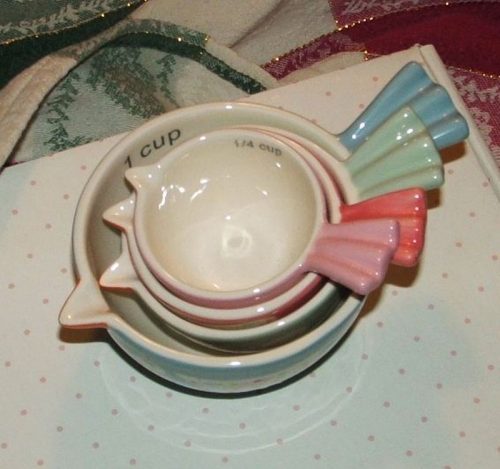 There is a possibly annoying mix of metric and non metric measures in the recipes on this site, particularly the early ones. I grew up in a non-metric world but Canada officially changed over to metric many years ago. However, we all use a bizarre mix of systems; our height and weight is usually measured in feet and pounds except on our drivers’ licences. Butter is still sold by the pound but milk is sold by the litre. Depending on the store, cheese is sold by the kilo or by the pound. Outdoor air temperature is measured in Celcius but oven temperatures are measured in Fahrenheit. You get the picture….

For bread baking, I now use our digital scale, measuring everything – including liquids – in grams. I’m especially fanatical about measuring salt by weight. There’s much less grief. And it’s just easier.

But I used to use measuring cups and spoons almost exclusively. 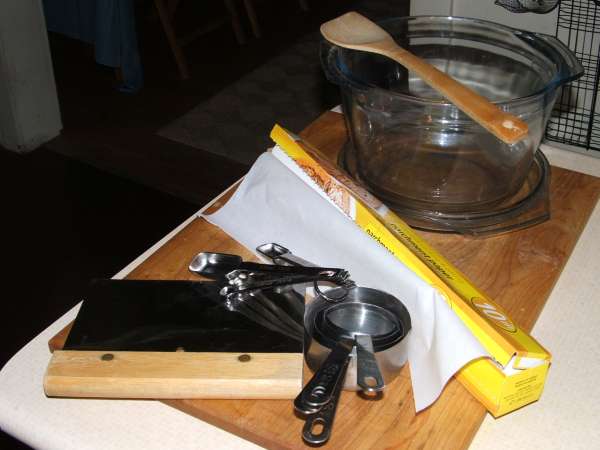 Here are the measuring abbreviations used in many of the recipes on etherwork:

A Few Equivalents and Approximations
(go directly to common ingredients)

¹ Please note that while a cup holds 250ml, 2 half cups only hold 240ml. (Does this make sense?? No. But that’s what it says on the measuring cup in Canada and this is the measuring cup I have often used to measure liquids…. However, when using cups and spoons for measuring, I use the half cup (120ml) for scooping out flour)

² Also note that an Imperial quart holds more than a US quart:

Because of the confusion between amounts in US quarts and Imperial quarts, I try not to call for pints or quarts in any of the recipes and have converted most liquid volumes to metric. I also do not call for fluid ounces for the same reason. If our neighbour to the south would join the rest of the world and officially embrace the metric system, this confusion could be reduced enormously – sooner rather than later.

For years, Ken Butcher was the sole employee working for the Metric Program (there are now two employees). Charged with guiding the whole country through the gargantuan task of metric system conversion decades earlier, he admits progress can be measured in centimeters.
In 1975, President Gerald Ford signed the Metric Conversion Act into law. It made metric the “preferred” system, though using it was strictly voluntary. But if Russians could forgo the arshine (28 inches), surely Americans could learn to forget the gallon. Global trade demanded a standard and although late, the U.S. would not be left behind. […]
As the years went on, the Metric system wasn’t only derided as confusing. It was a communist conspiracy! If the Americans converted under a multi-million dollar price tag, it was prime time for the Soviets to invade our weakened economy, according to the author of the 1981 book Metric Madness: Over 150 Reasons for NOT Converting to the Metric System. Government downsized under Reagan and cut the U.S. Metric Board in 1982. Butcher was the only person left.

(For more information about this, please see Afternoon Map: Countries That Haven’t Adopted the Metric System, and Metric usage and metrication in other countries.)

Temperature Conversion Formula
Here is a handy little formula for converting temperatures in your head:

And to go from Fahrenheit to Celcius:

And yes, I agree that 11% can be a little tricky for head arithmetic. But using the 11% is necessary for converting the higher temperatures (like oven temperatures) for maximum accuracy. And head calculation is great when one’s hands are covered in dough. I bet there’s nothing worse than trying to get dough off of the electronic calculator.

Multiplying by 11, the number is stacked on top of itself but skewed to the left. Only the inside numbers have to be added. (Yes, yes, if there are too many numbers, then one starts to lose track if one’s head is sievelike as mine is…. To find 11%, add 1% of the number to 10% of the number.)

Granted, there’s not that much difference between 225C and 232C, but if you’re going to bother to do the conversion, it might as well be as close as possible….

August 2020: For at least five years (I’m a slow learner), particularly for breadmaking, I have now switched from alternating between using cups and a shiny digital scale that was given to me in 2008 to leaving the cups alone and using a digital scale for measuring just about everything. (Don’t get me wrong; I still eyeball many things – for instance, I use whatever cup – even if it’s a china cup – to measure flour or masa harina for making chapatis and tortillas, as well as simply adding water until the dough feels right.)

One of the things I really like about using the scale to measure ingredients is that I can use whatever implement I want to scoop out or pour flour, salt, and water. It’s so freeing not to have to rummage through the drawer or dish rack to find the specific cup and spoon measures.

Here is why I have (finally) switched to measuring by weight. I performed this unscientific test in 2001, using our inexpensive, relatively accurate spring scale. According to the bags of flour we used then:

When measuring by volume, I invariably use a halfcup measure to get the flour out of the bag. The wholewheat flour we used at the time of the experiment was 14% protein and the all-purpose flour is 11.52% protein. The dark rye flour had no indication other than the note that it is 100% dark rye flour; I have no idea about the percentage of protein….

Here are three charts with weight equivalents for many ingredients:

Generally, on the now rare occasions of measuring flour by volume, I use the ‘fluff-scoop-level’ methods of filling the cup: I use a half cup measure to fluff up the flour, then I scoop up the fluffed flour and level it off with the flat of my finger. Yes, it’s true – not particularly accurate…. (The more labour intensive ‘fluff-spoon-level’ method is to fluff up the flour with a spoon, carefully spoon the fluffed flour into the cup, level it off with the back of a knife.)

All this talk of measuring accurately always makes me think of my younger sister’s grade 10 home-economics teacher, who chanted over and over:

Girls, there will be no guesswork in our kitchen!
(This was also the woman who told the class that it was not a ‘potato’ peeler but a ‘vegetable’ peeler. We tried to get my sister in trouble by encouraging her to suggest to the teacher that it be called a ‘produce’ peeler because one peels apples with it and apples aren’t vegetables… heh heh, I STILL call it a ‘produce peeler’.)

Still, when measuring flour for bread dough, it all comes down to learning how the dough should feel. Bread recipes all call for “more or less flour (and/or water) depending on the day”. We can carefully measure everything until we’re blue in the face and then suddenly at the end of the recipe, it all comes down to knowing how the dough should feel and deciding to add a little more water or flour. How is this done? Practice. I’m still practicing… but I’m getting closer! – mostly measuring by
weight, occasionally measuring by volume, and sometimes measuring by guessing (oh, horrors!).

I have always been a reactionary, but after reading article after article and book after book, even I became more inclined to use our rather inexpensive (and probably somewhat inaccurate) non-electronic spring scale rather than scooping with the cup measures. We still have the spring scale, but it too languishes on the shelf for most of the time. The electronic digital scale is the favoured instrument now. And my sister’s home economics teacher would be pleased to hear that I hardly ever guess. 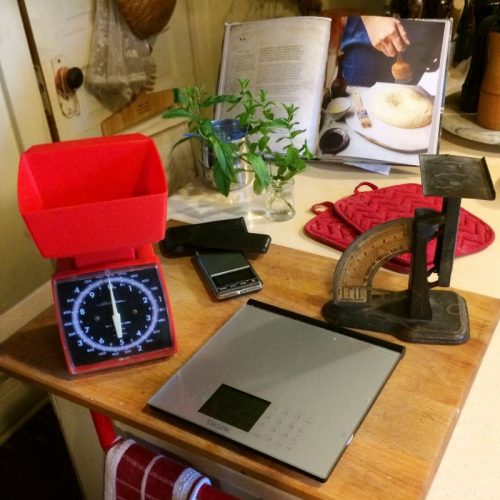