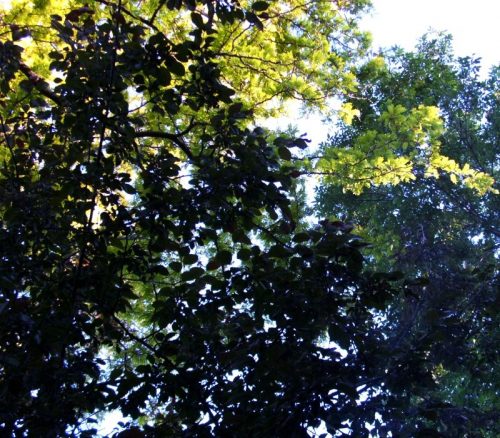 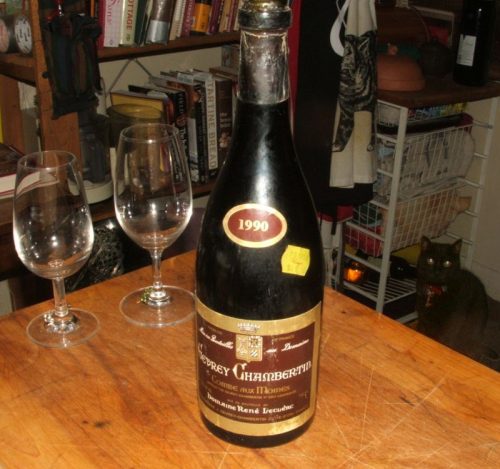 The other night, T really pulled out all the stops to make grilled chicken (Iraqi yellow spice rub), cherry sauce (using dried tart cherries we got last fall at SuperTehran, the Iranian supermarket), oven roasted potatoes, grilled eggplant, stir-fried Swiss chard (from OUR garden!), various herbs and flowers from the garden, and Gevrey-Chambertin Premier Cru 1990 wine that has been in the basement since early winter 1991 or so, after T lined up at the LCBO early one morning. He said that there was a “one bottle per person” ruling and as people arrived, they signed their names on a paper taped to the door so that it would be first come, first serve. But. When the doors were unlocked, mayhem ensued and perhaps one or two people paid attention to the paper on the door. Tot said that it was crazy. One woman fell and tore her expensive designer coat, trying to grab more than one bottle! 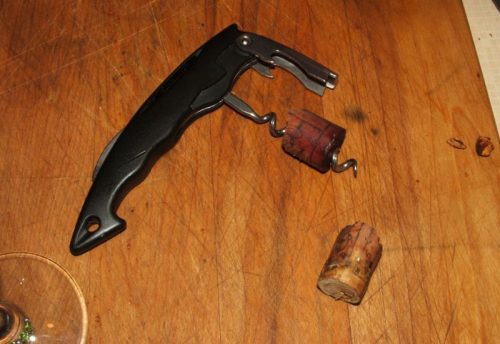 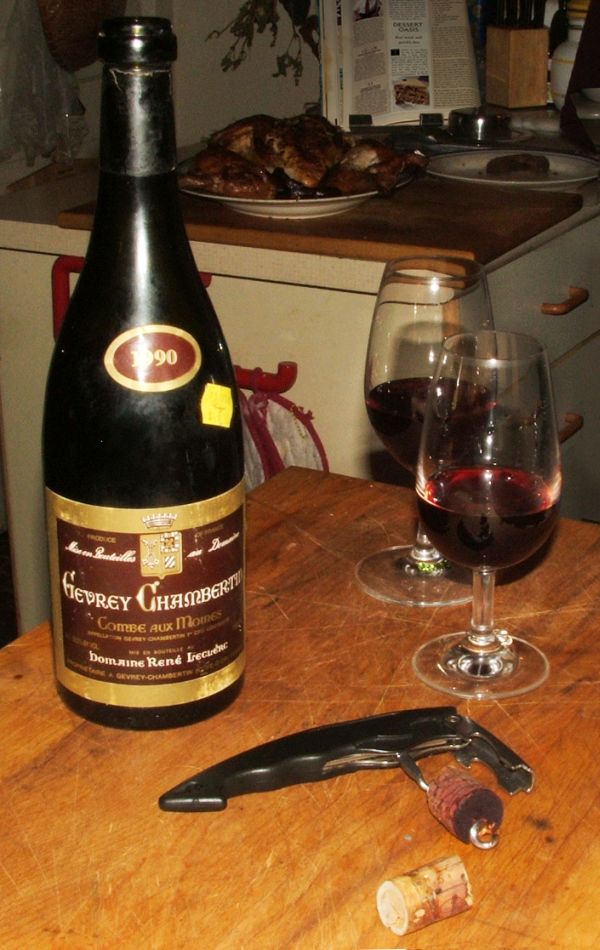 T says that this is the most he’s ever paid for wine at the store: $50. (We’ve paid more than this in restaurants but that’s different! The markup is much greater….)

The other night, when we saw that the cork on the Gevrey Chambertin was breaking as he opened the bottle, we were afraid we’d left it too late. But no. It was fruity and spicy and wonderful and went perfectly with the dinner.

Of course the wine took us right back to Gevrey-Chambertin when we were there in 1996 on the fantastic bicycle tour of the Cote d’Or that we took with T’s dad and brother. 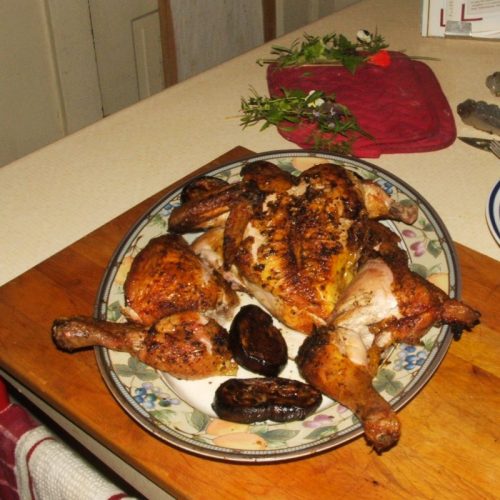 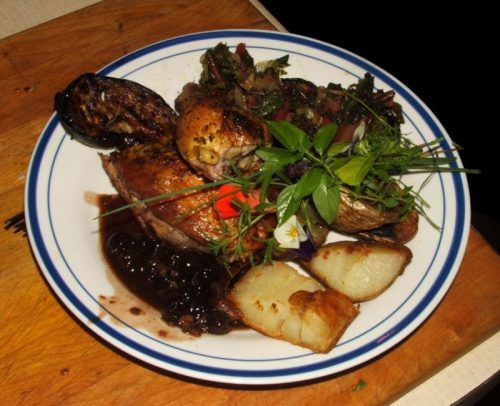 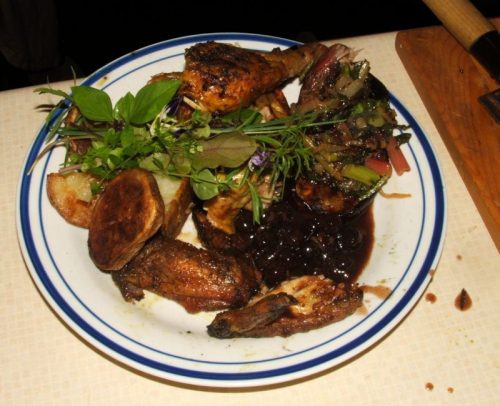 We sat outside in the garden, listening to the dulcet tones of the little boys (3 years old? 4 years old?) laughing and playing with their trucks next door, and their parents happily chatting softly. As darkness fell, the little boys were ushered to bed and/or home (no arguments that it wasn’t bedtime yet – wow, remember when we had to go to bed at 7pm when it was still light out?), we turned lit candles to stay outside in the softness of the evening.

The mosquitoes were starting to even bother T, so in we came to have pie! Rhubarb pie with buttermilk ice cream. It doesn’t get much better than that!

What a great night.

(Sorry, no photo of the pie; we were busy chowing down.)

Excerpt from my Voluminous Diary:

Friday, 6 September 1996 5:10pm Gevrey-Chambertin 25° The annual fête is taking place. T and P bought glasses to try the fête wine that is labelled Prix Roi Chambertin. […] Now there are some musicians on a makeshift stage just about to start playing electric bass and guitar, saxes, keyboards, drums […]
The square is filling up with lots of people – mostly French families and a few tourists. The square is sunny and the buildings are white plaster. It’s just a bit of perfection. The wine that these guys are trying smells like Christmas cake.

There are vendors selling beeswax candles, honey, homemade jewellery, fancy corks, pottery. […] There are two men wearing berets who just greeted each other. One has a cane and both have rosy cheeks. There are two little girls clapping in time to the music. They are dressed in pinafores and have their hair tied up in ribbons. They look so excited and pleased with themselves.

Can this day get any better?!

6:05 pm Hotel Chez Jeanette (21 Fixin) rode 35.06km […] [A]s we rode away from the fête in Gevrey-Chambertin, we saw many finely dressed people wearing “invité” badges strolling down the hill towards the square we had just left. There all carrying glasses like the ones that P & T bought and looking quite rosy cheeked. We also saw the King, apparently a Parisian radio disc jockey specially chosen to be the 1996 Roi du Gevrey-Chambertin. He was sporting a beard, long red cloak fur lined, and a golden crown. The fête seems to be a very big deal. What a stroke of luck to see a bit of it. […]
Earlier in the day when we were looking around the empty square before the fête had begun, a man in a bright green shirt leaned out of his 2nd story window and P asked him for directions and where we could buy water. He leaned out to point and talk. Every once in a while he would turn around and say something to someone inside. He came down, took the water bottles from us to fill them in his home. […]

10 pm Fixin We went for a little walk [after dinner] – it was quite chilly. My teeth were chattering. We were only out for about 10 minutes. But the night was clear and we saw stars like we haven’t seen for a long time. We passed a pub in which people were singing. It looked very jolly and cheap. […]

Saturday, 7 September 1996 10:55 pm Just got back from an amazing dinner and ride. The sky was clear and the stars very bright on the short (about 2 km) ride from the restaurant Sugoy Clos Côtes Cour in Gevrey-Chambertin. We had an excellent prix fixe dinner […] We had Kir to start with little ham crudités that came gratis. Then I had galantine of chicken and mushrooms that was excellent. P & T had the same. G had a cold consommé with smoked salmon. That was followed by duck with pasta(!) for the others and an excellent salmon trout for me with eggplant sludge on the side and tomato pine nut garnish. the begining 1/2 bottle wine was Bourgogne Alligoté Bouzeron Clos de la fortune 1992. The wine with dinner was Bourgogne Philippe Leclerc 1991. […]

Later on in our dinner, a couple dressed in leather came in and it turned out that the man was none other than Philippe Leclerc himself. T and I looked at his chopped up Harley that had gold leaves painted on it. T didn’t like it but I thought it was rather beautiful.

But the dinner: the main course was followed by fromage blanc then a fruit thing that had hot cream on it (I think) It was delicious with blueberries, strawberries and raspberries. None of us had coffee but we got a plate of very good meringues, little shortbread biscuits and candied apricots. […]

In spite of the headwinds [today], what a great day!