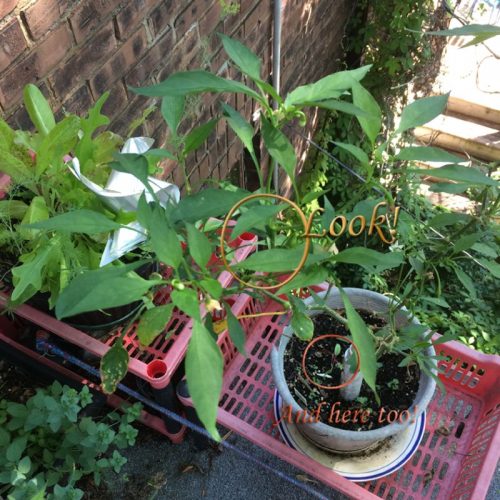 This cayenne chili plant is from last year. I thought I had murdered it in the basement this past winter; when I brought it out to the balcony, there were zero leaves on it. (I only brought it out to plant other things in the pot.) Just before I was about to uproot it, I noticed tiny leaf buds on the bare stems. And look at it now! Not only is it covered in leaves, it’s fruiting!! 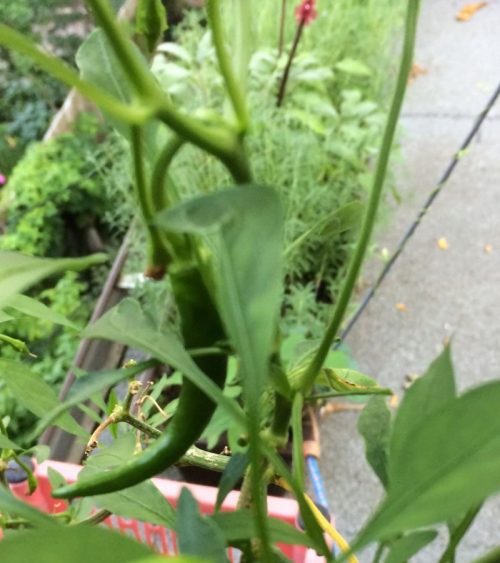 Secondary miracle: the zillions of Swiss chard seeds (thank you for sending them, P and J!!) that I planted at the end of June in various spots on the balcony, behind the garage, and in the back garden, this is the lone seedling that came up! (I think it might be one that dropped out of the package by mistake….) 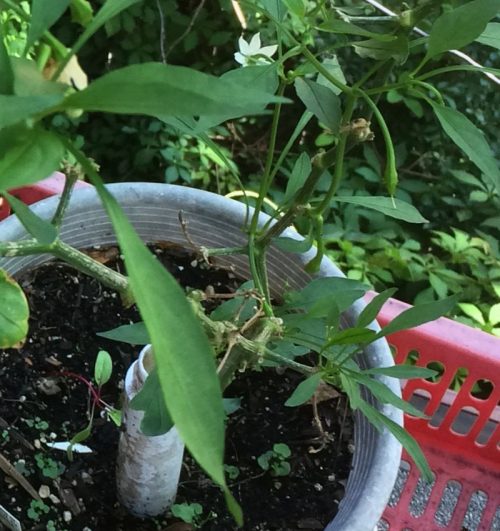 Tertiary miracle: the oregano in the lower left corner of the top image also survived the winter outside – in a 6 inch wide window box pot!

Because I adore Swiss chard for dinner, instead of (as I’ve done for at least a couple of years now) skipping out to our sunny section of garden behind the garage to cut several leaves, I was compelled to buy some at the vegetable market. The bunch contained at least 10 leaves – several different colours. Because we are still in the mode of shopping once a week, instead of each day, the chard got a little limp in the fridge. (Ha! A little limp? It was so wilted that T decreed it should go into the compost bin.) But after washing it and standing it in water for about 5 minutes (really!!), it was completely rejuvenated. 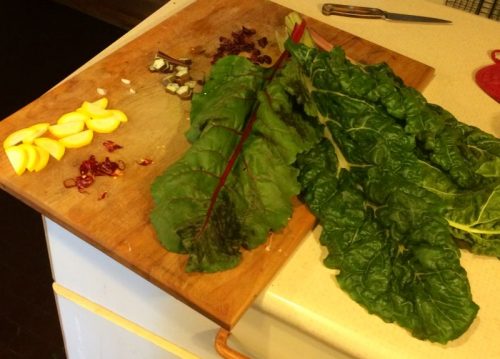 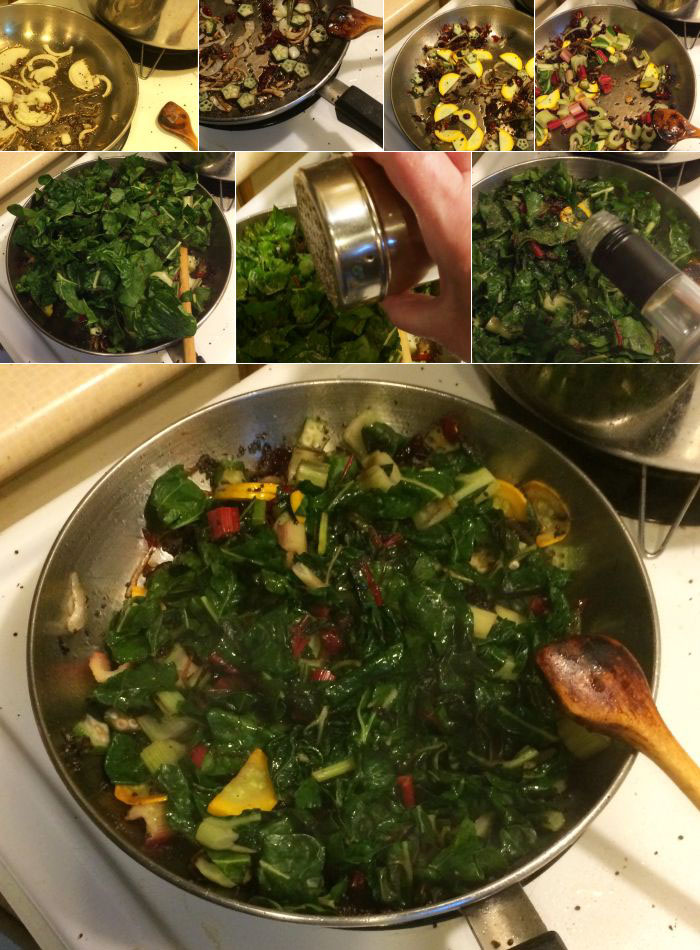 It takes only about 10 minutes to stir-fry Swiss chard – and at least half of that time is spent doing other things. I stir-fried the chard with mustard seeds, onions, garlic, dried cranberries, yellow zucchini, dried hot hot hot chili from last year’s garden, and a red okra pod from our garden. Whoooohoooooooooo!

Serve immediately to retain the lovely colours. If you are planning to reheat it before serving, present the dish in candlelight.

(The yellow zucchini were also from the vegetable market – all our garden zucchini plants were producing male flowers only for most of July, but have suffered greatly in the past few weeks of overly hot, humid, and/or wildly rainy days; alas, they are now refusing to produce any flowers at all and are about to keel over.) 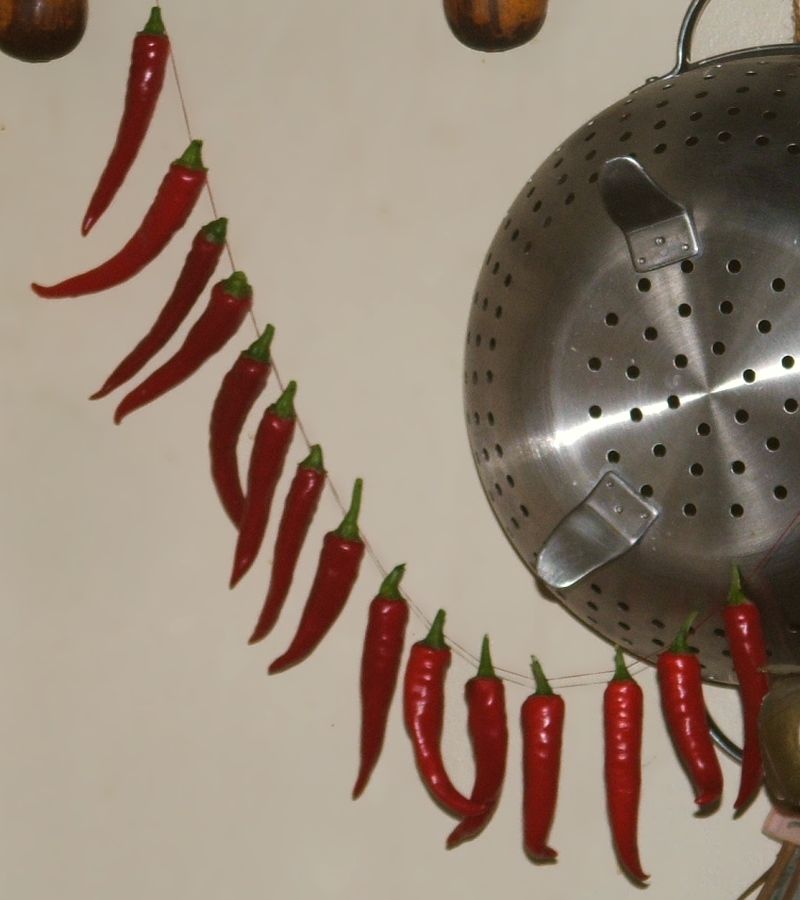 Last year’s dried chilis are almost too pretty to use… almost…. 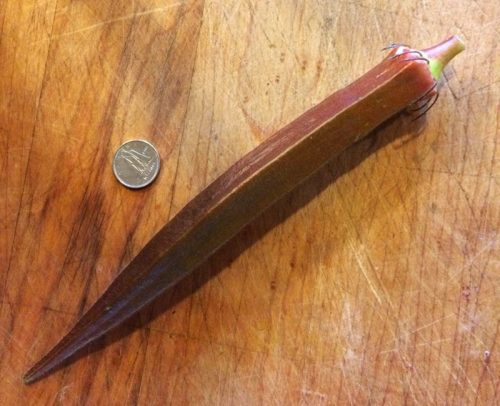 This year’s red okra is almost too scary to use… almost….

The stir-fried Swiss chard looked gorgeous in the pan. Alas, re-heating it (the hazards of pre-cooking the vegetable half an hour or so before dinner), it ended up looking a bit like dog’s breakfast….

But it was delicious! 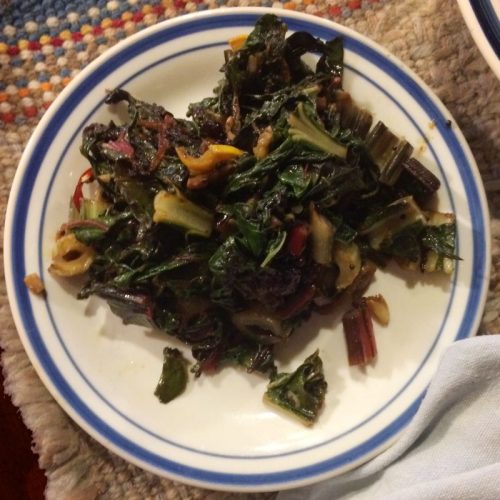 I know I’ve said it before, but it bears repeating: I LOVE dinner!! 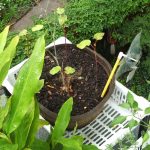 Two years ago, in late June, I planted red okra seeds in a pot on the balcony. They sprouted….

Last year, in early June, I planted the seeds behind the garage – because they obviously need more sun. Only two plants survived. One of them produced fruit: one single spindly little pod. We did not harvest it. We did not record its existence for posterity.

Being a glutton for punishment, I planted red okra seeds again this June. And look!!! 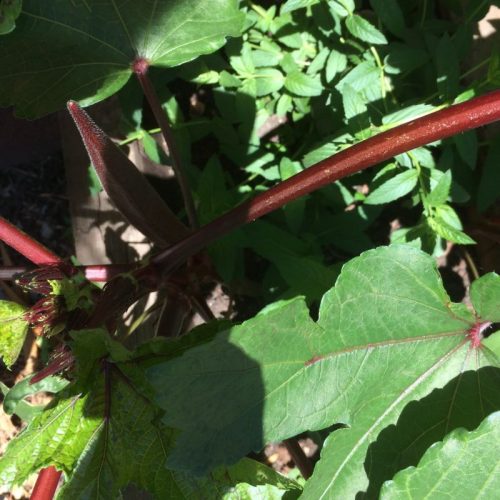 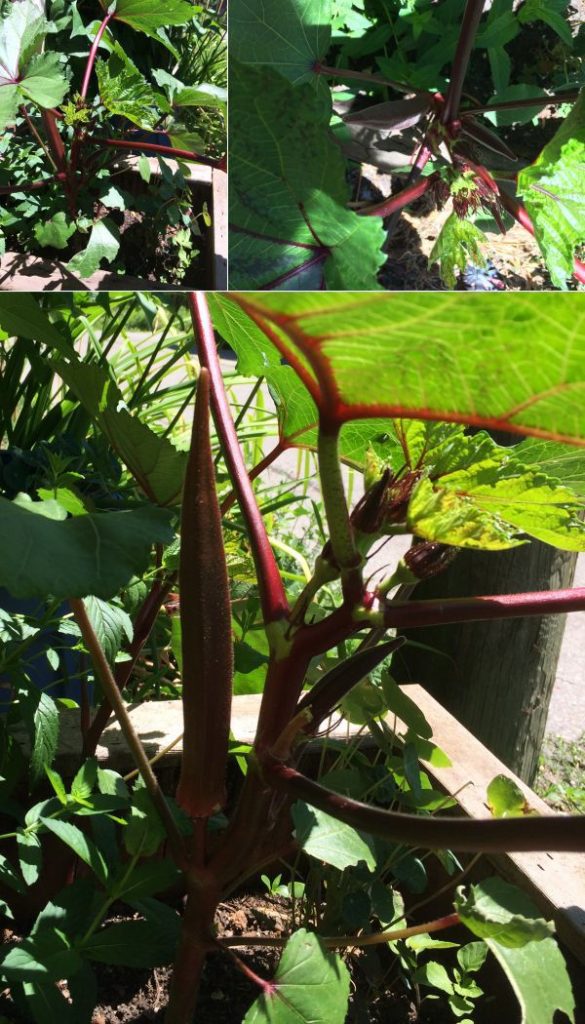 The stunning red colour is not retained when the okra is cooked. Indeed, it takes almost no time at all for the red to turn green. 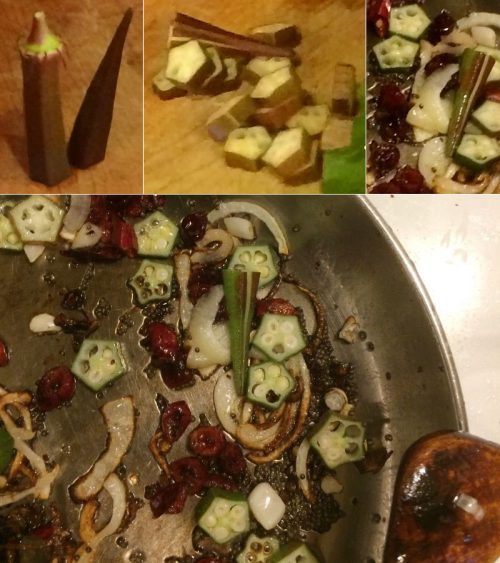 We were a little afraid that the okra was already too large and would be woody. But no. It was beautifully fresh, sweet, and crunchy. What a difference from store-bought okra!

Now excuse me while I go to harvest more red okra pods before they take over the back lane entirely. 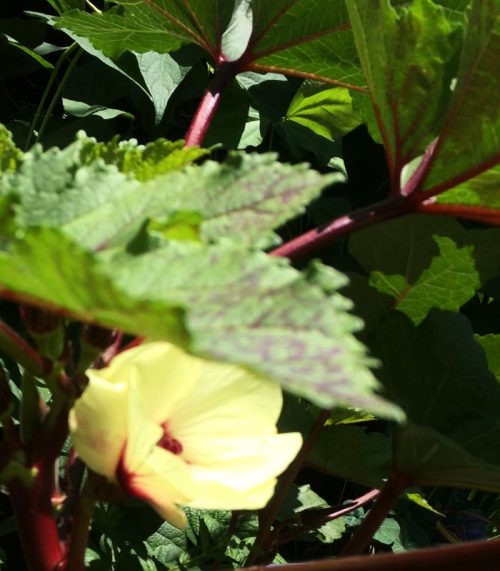 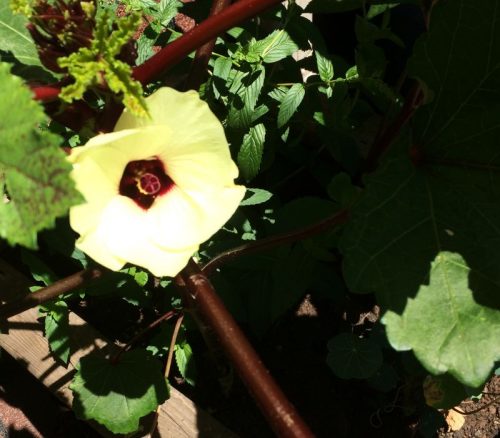 The lovely red okra flower appears very briefly,
only lasting for one day before curling up into pod shape.