First of all, many thanks to my sister for taking over with the annual fruit cake production! The cake is easily as good as Mum’s always was. And Mum’s fruit cake was always stellar.

The slices of cake pictured here are from last year’s cake. (We’re keeping this year’s cake in its tin until next year. Aged fruit cake is really the best, don’t you think?) 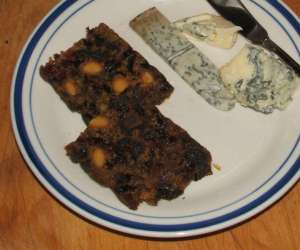 I cannot fathom why it is that people turn their noses up at fruit cake. I adore it. Well, I adore Mum’s fruit cake anyway.

My favourite way to eat it is thinly sliced with cheese. Shaved parmesan, aged gouda and sharp cheddar all work beautifully.

The practice of combining cheese, fruit, and nuts dates back to ancient times. These were often served at the end of a meal because they were thought to aid in digestion.

Ha! It never occurred to me to be thinking of my digestion! I just think that it tastes good.

The other day, I talked about putting apple pie and cheese on the same plate. As always, from some quarters it has been met with skepticism, with comments ranging from “ewwww” to “hmmm, interesting”. And almost always a reluctance to try it.

And yet once tried, there’s no turning back.

As fabulous as apple pie with cheddar is, we discovered something even more fabulous this Christmas: thinly sliced pieces of fruit cake with blue cheese. Oh my! 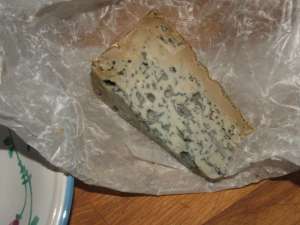 Each one was delicious. But, you’ve got to hand it to the French; the St. Agur was, hands down, the best tasting.

And then we added to the sensation by pouring ourselves glasses of port. Oh my my my!!

I thought I didn’t like Port. I’ve always maintained that it tastes like cough syrup. Elizabeth Barrett Browning’s father’s description of Cyprus wine (I’m guessing this must have been Commandaria) is pretty much spot on for how I have always felt about Port:

In the excess of my filial tenderness, I poured out a glass for papa, and offered it to him with my right hand.

‘Taste it,’ said I as laconically, but with more emphasis.

He raised it to his lips; and, after a moment, recoiled, with such a face as sinned against Adam’s image, and with a shudder of deep disgust.

I explained with the proper degree of dignity that ‘it was Greek wine, Cyprus wine, and of very great value.’

He retorted with acrimony, that ‘it might be Greek, twice over; but that it was exceedingly beastly.’

I resumed, with persuasive argument, that ‘it could scarcely be beastly, inasmuch as the taste reminded one of oranges and orange flower together, to say nothing of the honey of Mount Hymettus.’

He took me up with stringent logic, ‘that any wine must positively be beastly, which, pretending to be wine, tasted sweet as honey, and that it was beastly on my own showing!’ I send you this report as an evidence of a curious opinion. But drinkers of port wine cannot be expected to judge of nectar—and I hold your ‘Cyprus’ to be pure nectar. 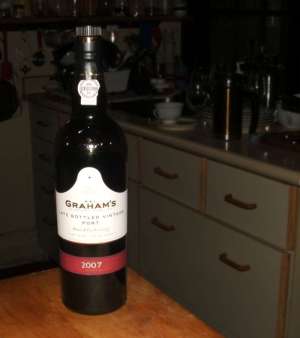 This Late Bottled Vintage Port tasted neither beastly nor did it taste like cough syrup! Not even remotely. Suddenly, I know why people swoon when they hear that Port is being served after dinner.

From now on, whenever we have Late Bottled Vintage Port, I will swoon too.

I have been informed that in the past apparently, I’ve tasted Ruby or Tawny Port.

[Ruby Port] is the most basic of wood-aged Ports and the youngest. A Ruby Port is a blend of several years, typically averaging 3-5 years old. They are simple and fruit driven given their young age and are less complex than a Reserve Ruby or Late Bottled Vintage Port which progressively move towards a Vintage Port in style. Ruby Port is vinified to be consumed upon release and is not meant to be aged at all, with primary, vibrant fruit character. […]

Also called LBV. Late Bottled Vintage Ports are produced from the grapes of a single harvest; the vintage of which will be stated on the label, and can be either filtered or Unfiltered (formerly called “Traditional”). The year of bottling will also appear, typically on the back label of the bottle. LBVs are bottled between the 4th and 6th year after harvest and typically spend those years in very large oak barrels, which are called Tonnels. […]

There are those folks (many, of the “cigar persuasion” set) that actually take sides….VP vs. Tawny. Like listening to a heated debate of which heavyweight boxing champion was the all-time greatest, a discussion of which is the BEST style of Port is always an interesting topic. Surely this question has no right or wrong answers…just opinions and varying tastes. […]

Tawny Port actually starts out like a Ruby Port, but then spends an extended period in wood to soften and round out its character. As the large oak casks or “pipes” are somewhat porous, the oxygen that enters over the years will allow some of the wine to evaporate. This concentrates flavors in the remaining wine and leaves a slight “air gap” at the top of the cask. Like a fine wine in a decanter with increased surface area exposed, the Tawny Port is allowed to oxidize during its time in the oak vessel. Constant racking over the many years the wine is in cask also allows for further oxidation. As this oxidation process takes place, the color of the wine slowly changes from a purplish-red eventually to a tawny or reddish-brown. The more time the Tawny spends in wood the more complex its flavor profile, and the Tawny-er the color becomes.

-Roy Hersh, For the Love of Port, Port FAQs (fortheloveofport.com) 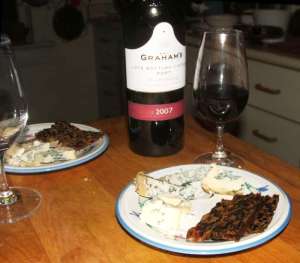