summary: recipe for granola made with steel cut oat groats and flattened rice; (click on image for larger view and more photos) 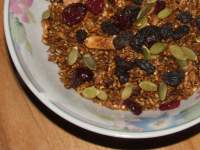 Is there something about April that makes people neeeeeeed to use oatmeal?

This month’s Bread Baking Day asks for bread with oatmeal. I confess that until seeing that, I hadn’t really thought about using oatmeal in anything but stuffed roasted capon (don’t turn up your nose! oatmeal dressing is NOT like porridge).

I suddenly had an urge to make granola. I love granola and haven’t made it in ages.

I’m not alone on this granola kick. Susan (Wild Yeast) made granola recently. And not long ago, Jasmine (Confessions of a Cardamom Addict) was looking for rolled oats for granola.

Me three. I neeeeded to make granola. Not just any granola though. Granola like the granola made by the cooks one year at summer camp. Granola with raisins, coconut and poppy seeds. The best granola I’ve ever had.

I went to the supermarket and…

What’s this??? There were NO rolled oats! There were many packages of quick oats. But no rolled oats. Not in the baking aisle. Not in the cereal aisle. It was a Monday so I decided they must have had a run on rolled oats (??!) and were going to restock the shelves.

I went to the healthfood store…

I returned a few days later to the supermarket and…

Yay!!! I THOUGHT I found them when I saw “steel cut” oats in a fancy looking blue cardboard tube. When I opened the container, I didn’t see nice big oatmeal flakes! They turned out to be steel cut whole oat groats. Whatever groats are… (¹)

I made the granola with them anyway… It turned out fabulously.

I added some flattened rice to the granola as well – so there would be some flakes in the final granola. (We had the flattened rice for making “Poha” from A Memoir with Recipes by Shoba Narayan. Remind me to post about that!) Here is what I did:

Granola
based on “Grace’s Granola”

Serve with yoghurt, pepitas , Thompson raisins, chopped dates and/or dried apricots***. This granola would be a great topping for ice cream too.

** I had forgotten how sweet this granola is! Next time I’ll use half the amount of honey. edit 18 May 2008: I made the granola again yesterday with rolled oats, using 1½ c rolled oats and ½ c oat groats. I also drastically reduced the honey and only added 1 Tbsp. The resulting granola is perfect!

*** Susan cooked the pumpkin seeds into her granola. I was worried that they might burn (although they’d probably be fine) so decided to put them along with the fruit into the bowl at the time of serving. I used to stir the fruit into the granola in the last 30 minutes (or so) of cooking. But I really wanted our granola to stay crispy in the jar so switched to using them as a garnish. 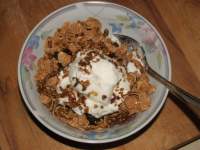 Because the granola ended up being so sweet, I’ve been adding it to unsweetened “Ancient Grains” cereal. (Have my tastes changed? Was it always this sweet?) Even so, we’ve almost finished eating it. It’s almost time to make more.

I contacted Jasmine to see if she knew where I could find rolled oats in Toronto. She too thought they should be available at any supermarket. We both decided that there had been a demographic study made to decide that our area doesn’t want rolled oats. One of Jasmine’s friends said that according to the demographics, our neighbourhood is “high non-Western”. Very interesting.

But I was in Kensington Market the other day and got them at one of the grains and seeds stores. The Health food store there also carries them. Then, wouldn’t you know it, on the way home, I stopped off at our no-frills (the same one that had NO rolled oats for so long) and there in the cereal aisle were “large flake oats – ideal for baking”. I looked at the ingredients on the package – yup: rolled oats and oat bran. Very strange. I would SWEAR those weren’t there before!

¹ Isn’t the internet great? After looking at the photograph on the Cook’s Thesaurus website, I see that what I bought were Steel Cut Oats, aka Irish oats, Scotch oats, pinhead oats. (Hey, Jasmine! I’m a pinhead too!!) Steel cut oats are groats that have been chopped. And groats are whole oats with only the outer hull removed.

Oats are good source of vitamin B, anti-oxidant vitamin E, as well as being mineral rich. Apparently they are also good for reducing cholestrol.

Rolled oats are oat groats that have been rolled and flattened into flakes. (And judging from the look of our flattened rice, this is exactly what was done with the rice kernels to produce the flattened rice. Once again, isn’t the internet great?!)

Hmmm, I wonder if steel cut oat groats would be good as a substitute for rolled oats in oatmeal cookies….

And bread? Oh yes, I’m supposed to be making bread with oatmeal, aren’t I?

edit 1 May 2008: I did make bread using rolled oats, oat groats and oat bran. But there were several other ingredients as well, making it Multigrain Bread