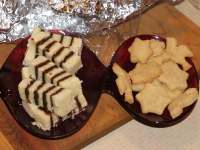 You can see why my sister and I make ví­narterta every year, can’t you? It looks so beautiful! And it tastes fabulous too. (Those are ginger shortbread cookies on the right.)

I just can’t imagine Christmas without ví­narterta! When I was a kid, the ví­narterta was strictly off limits to us unless it was cut and placed on a serving dish. And even then, we had to wait a discreet amount of time until guests had helped themselves to the cake.

I was always pleased to help when Mom asked me to cut the cake for the guests. This was a great opportunity to cut away and savour bits that I pretended weren’t suitable for guests.

The morning after dinner parties was always wonderful too. We would get up very early and tiptoe into the dining room where the table was still covered in white linen and plastic covered goodie plates. We’d each snake a hand underneath the plastic to snag a piece of ví­narterta.

Sometimes, there wasn’t any ví­narterta left on the serving dish. This called for more devious action, generally done alone and away from the peering eyes of possible tattletales. I’d walk into the kitchen ostensibly to put something away and then sidle over to where the ví­narterta tin was. And then carefully, carefully, remove the lid and gently, gently (shhhh!!) remove the wrapping from the cake. A swift but studied swish of the long sharp knife to shave off a whole row of the cake. Delectable!! It’s true. Plunder really does taste better! (It was years before I learned how it was that Mom somehow knew about this. I thought it was because the others had shaved off too much so that the cake had visibly shrunk. But it turned out that she knew because she had done exactly the same thing as a child!)

Even though I no longer have to sneak into the kitchen to get my ví­narterta fix, I assure you that this year’s cake was as stellar as ever. In fact, we think it might be even more stellar than usual. The only differences from other years were:

As I eat the cake over the Christmas holiday, I can never decide at what time of day it’s better. Is it really best after dinner with a small glass of eau de vie? Or is it best in the morning with good strong coffee? Or is it best on its own as a surreptitious afternoon snack? Hmmm, there’s still a tiny bit left. Perhaps I should go downstairs and see….

We always give a quarter of the cake to our friends who dine with us on Christmas Eve. This year, I found out that she hoards some of the cake for herself and sneaks into her own kitchen at various times of day to discover at what time it’s best!! I bet that if she were staying here, I’d have to watch to make sure she wasn’t sneaking very long thin slices of cake.