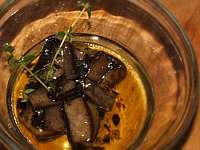 I think I’ve mentioned before just how much we love SAVEUR magazine. When I first got the subscription (sometime around issue #30), I eagerly read each issue cover to cover and anxiously waited for the next installment. I kept thinking that they’d run out of steam at some point. And sure enough, there were a couple of issues in a row last year that I thought maybe they had indeed lost their touch.

But I’m happy to say that they’re back on track. In the latest issue, there is a wonderful article about mushrooms. Chinese mushrooms….

It was the height of the foraging season in perhaps the best place on Earth for finding and eating mushrooms. […] [Duan Jan Pin] cooked jicong mushrooms in a quantity of bubbling oil along with dried red chile and Sichuan peppercorns. Once it was cool, she poured some of the infused oil into a jar for me to take home. “You can keep this in your kitchen and put a little in soups or noodles dishes,” she said. A perfect souvenir of Shaxi: the essence of those mushrooms, captured and concentrated.

We decided we neeeeeeded to try this right away. But we didn’t have Jicong mushrooms. (Take a look at this SAVEUR photo (scroll down to ‘Xiang Gu You’) to see why we HAD to try it! ) And we didn’t have Szechuan peppercorns either. (We used to but really didn’t like how grainy they are; they tasted pretty much like sand. We really should try again. It’s entirely possible that the Szechuan peppercorns we got all those years ago were impossibly old.)

We decided to use regular black peppercorns. And Portobello mushrooms because they’re readily available at our vegetable store.

The resulting oil might not be exactly like the infused oil made with Jicong mushrooms and Szechuan peppercorns, but it is pretty darn good. So good that it’s already all gone.

Even though Kracklauer’s article was about Chinese cooking, we used the oil to make western style food: mushroom omelettes, cooking the omelette in the oil and then drizzling a little oil over the omelette once it was done. We thought it might be like using truffle oil but a lot less expensive.

And it was indeed reminiscent of truffle oil. But far more delicate. But just as delicious.

Here’s what we did to make the oil:

Oil Infused Mushrooms
based on the recipe for Xiang Gu You (Mushroom Infused Oil) in SAVEUR magazine, Issue #140 – August/September 2011 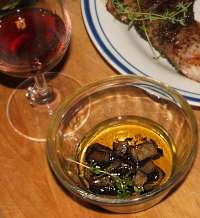 How long does it last in the refrigerator? Not long in ours. It was all gone within a couple of days….

Serve the oil to dip bread in, make wonderfully delicate mushroom omelettes, dribble over pizza crust, or drizzle over a grilled chop.

1.) peppercorns: On this occasion, we used whole black peppercorns. Next time, we will crack them. As we were eating the oil, whenever we came across a whole peppercorn, we were afraid of breaking our teeth. Also, please note that Duan Ja Pin, the woman in Yunnan who presented the oil to Beth Kracklauer, used Szechuan peppercorns.

2.) garlic: We added garlic because we were trying to mimic truffle oil: for us, there has always been a hint of garlic in the flavour of truffles.

3.) mushrooms: In China, apparently this oil is infused with jicong (Termitomyces albuminosus) mushrooms. SAVEUR magazine suggest shitakes (Lentinula edodes) as substitutes. We used a largish portobello (Agaricus bisporus) this time but will try shitake next time.

Next time, we’ll make sure to get shitake mushrooms. The portobellos, while lovely, were just a little too delicate in flavour. (Ha. Yes, it’s true; we like BIG flavours….)

And, of course, once the new oil-infused mushrooms are made, the next time we have an Asian noodle dish, we’ll be sure to drizzle on a little of the oil. If we have any left, that is….

We tried reconstituting dried mushrooms and using them. This was not a success. Say no more….