summary: SAVEUR magazine’s Red Rice with Guam-Style Chicken Pork is delicious; information about annatto (aka achiote) and Weekend Herb Blogging; a rant about the food we can and cannot get; there IS enough food for everyone; (click on image to see larger views and more photos) 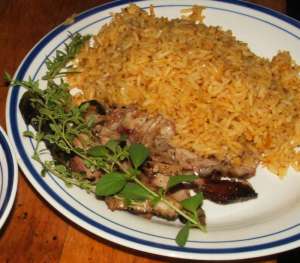 And SAVEUR magazine comes through again!

In this year’s June/July (#148) issue, there is an article designed to make Torontonians alternately green with envy and red with rage. It’s about the streetfood available in Portland, Oregon. They can get just about anything from a food truck!

Burmeister drove me to a small pod with a cart called PDX 671: The name combines the Portland airport code with the area code for Guam. The young couple that runs the cart, Edward and Marie Sablan, are from the tiny island in the south Pacific. When we arrived, Edward was tending marinated chicken and short ribs on a smoking grill while his young son and daughter ran around the picnic tables. Inside their 16-by-8 feet cart, which looks not unlike a restaurant kitchen, Marie was serving up orders of annatto-tinged, smoky tasting red rice; titiya, the coconut milk—enriched flatbreads that are central to Guam’s indigenous Chamorro cuisine; kelaguen mannok, a salad of chopped grilled chicken with lots of freshly grated coconut, lemon juice, onions, and hot peppers. “This is our fiesta food,” Edward told me, a mix of Filipino, Japanese, and Spanish influences. “It’s what my family cooks, and what our friends from Guam prepare when we get together.” I had never come across any of these dishes before, anywhere in America.

And what can we get from a roving food cart and/or food truck on the streets of Toronto? rrrrrrmmmmfphhhhh! Hot dogs. Sausages. French Fries.

Okay, that’s enough now! (I raved a lot more and as it got longer and longer, I decided to push my foaming-at-the-mouth rant about street food in Toronto below the fold.)

Let’s get back to why I started this in the first place: the red rice that Portlanders can buy ready-made and hot from a food truck. Now, thanks to SAVEUR magazine, WE can have that red rice too without even leaving the house.

As long as we have some annatto.

When T decided to make this rice, he called up from the kitchen asking where the annatto was.

me: Wasn’t it in the spice drawer?

he: No. I already looked there.

me: Is it with the spice mixes on the shelf?? [walking into the kitchen to help looking]

Nope!! It was nowhere to be found.

And yet we were both certain we had some. We use it to make Arroz con Pollo. I’m amazed that I have never blogged about that rice. I LOVE that rice!! It’s pretty fabulous. Even without the annatto seed. Because now that I think about it, we’ve made it with and without annatto.

The SAVEUR red rice recipe calls for the annatto seed to be ground and added to boiling water. This is quite different (and frankly, easier) than the method used for making Arroz con Pollo, which was to fry the annatto in oil and then strain out the seeds.

And as that I reel back the tape, I vaguely recall finishing the annatto seed and reporting that we should replenish it. I just as vaguely recall T nixing it (or am I simply imagining this?), saying that all it did was add colour. I always maintained – and still do – that it adds a lovely earthy flavour and scent to dishes. It’s not overly powerful but it’s there nonetheless.

Do you have any Annatto seed? No? Quick! Get some! And make Guam Red rice. Here is the recipe: 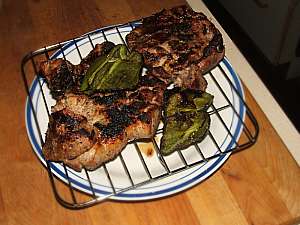 The SAVEUR recipe includes one for “Guam Chicken” calling for a marinade of cane vinegar (we used cider vinegar and added a little sugar), soy sauce, pepper and onion. Then we marinated pork butt instead of chicken. Here it is just off the grill, resting on a rack placed over a plate to keep the juices in.

We grilled green peppers at the same time. I used to adore green peppers but they just don’t taste the way I remember them tasting when I was a kid. Have I changed?? Have the peppers changed??? Perhaps both.

T is always asking to have them. I’m always saying no because they taste dull.

The other day, our vegetable store was selling “slightly past their prime” peppers at a major discount. Included with a yellow, two orange and one red was a smallish green pepper. We decided to get the peppers. As long as I didn’t have to eat the green pepper.

But I tasted a small corner of these grilled green peppers. What a revelation! It actually tasted like green pepper. I wheedled with T to let me have half of the green pepper he’d grilled. 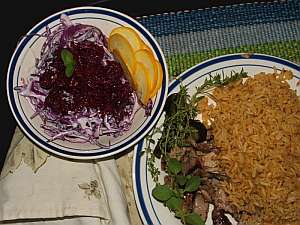 As well as the green pepper, along side the red rice and grilled pork, we served coleslaw made with red cabbage garnished with beet salad and yellow zucchini coins. (And zero dipping sauce. Oops!! Maybe next time.) Fresh thyme, lemon thyme and oregano were the perfect added touches.

Our dinner, once again, was delicious! Who needs food trucks?! 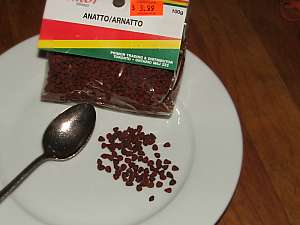 I know. Annatto (aka Achiote, Lipstick Tree, Urucu, Onoto, Roucou…) is not an herb. It’s a spice. But luckily, the rules for WHB say that a spice can be featured.

Dried annatto seeds have a weak, perfumed odour. In the fresh state, however, their scent is intense and mild–fruity. […] Annatto is na­tive to South America, and is currently mostly in use as a flavouring and food colouring in Central and Northern South America. In the Carib­bean, the seeds are usually fried in (animal or vegetable) fat; after dis­carding the seeds, the then golden-yellow fat is used to fry vege­tables or meat. […] In South México (Yucatán), meat is often marinated with a spice mixture called recado that derives its vibrantly yellow colour from liberal addition of annatto. The annatto seeds may be used ground (often after soaking in hot water to soften them) or in form of annatto oil. […] By Spanish influence, annatto also has made its way to South East Asia. [I]n the Philippines, the seeds are often ground to a powder and added to soups and stews; meat is often marinated with annatto-coloured seasonings. […] The nearby Mariana Islands also have annatto seeds in their culinary repertoire; there, the fresh seeds are a component in spice pastes and lend a deep crimson red colour to rice or pork dishes.

Katzer goes on to say that dried annatto does not impart any flavour aside from a “very faint fragrance”. I must disagree. The fragrance is most definitely there – pleasantly so. And while the earthy flavour is quite delicate, it too is missed when it is absent in a dish that calls for annatto seed.

When I read that some Asian cultures use fresh annatto seeds, I was quite curious. After a little searching through our cooking and/or gardening books and a little more on the internet, I see that annatto can be grown even in our climate. Well, not really; half of the time it would need to be indoors.

Annatto is a red seed, best known in the West as an oragey-red dye for food and fabric, but it is used as a spice in a number of tropical countries. Sometimes growing 10.5m high, the tree’s leaves and prickly fruit pods are both heart-shaped. […] Buy the seed in West Indian grocers and store in an airtight container.

Uses: The rather peppery seeds are particularly effective with fish, rice and vegetable dishes […] [and for] colouring smoked fish and the rinds of cheeses such as Edam.

– Richters (search for “Annatto” in the catalogue)

The fruits are heart-shaped, brown or reddish brown at maturity, and are covered with short stiff hairs. When fully mature, the fruits split open exposing the numerous seeds. Although it does not produce an edible fruit, the achiote is widely grown for the orange-red pulp that covers the seeds. The achiote dye, which is prepared by stirring the seeds in water, is used to color butter, cheese, rice and other foods.

Of course, because annatto is a tropical plant, it’s absolutely not hardy here in Toronto. If we did decide to grow it, it would have to be hauled indoors for the winter. (More to the point, do we have room for it under the grow lights to fit in with our bay tree, lemongrass, pepper, lemon verbena, and newly acquired fig tree?)

Still, I’m quite curious. Imagine how thrilling it would be to see the lovely wildrose-like blossoms that then turn into vivid red spiky pods in the garden! And then we could try the fresh seeds too!

Has anyone tried growing it?

edit 31 July 2012: Marta has posted the roundup. Please take a look at all the other wonderful WHB#344 entries:

Rant: And what can we get from a roving food cart on the streets of Toronto?

It’s pretty dismal. Until recently, cart vendors were only allowed to reheat pre-cooked food that has been procured from a manufacturer which has already been inspected by Toronto Public Health. Here are the items that have been added by those oh-so-progressive bureaucrats at Toronto City Hall:

That’s pretty much it. And that’s only for stationary carts.

DON’T get me sidetracked into ranting about how backward-thinking Toronto is on this. But get real. If I want pre-packaged salads, I’ll get them at the supermarket. No wait. I won’t. I’ll make the salad myself and put it into a cooler…. And food trucks? Are you kidding? (The city claims that they’re protecting the restaurants. Hint to restaurateurs: if your food is good, people will come. If your food is great, people will come in droves. No matter how much you’re charging.)

And speaking of not being able to get what we want from food trucks… what about the places where there aren’t any food trucks at all? Or rice.

There IS enough food (including rice) for everyone; let’s ensure that everyone gets some. 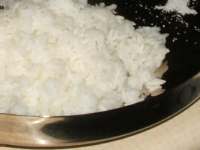 The world produces enough food to feed everyone. World agriculture produces 17 percent more calories per person today than it did 30 years ago, despite a 70 percent population increase. This is enough to provide everyone in the world with at least 2,720 kilocalories (kcal) per person per day […] The principal problem is that many people in the world do not have sufficient land to grow, or income to purchase, enough food. […]

Of course, there is much more we can do, but the least we can do is insanely easy: