summary: black-eyed peas and rice with barbecued Jerk Chicken; what to do with sprouting onions; brief review of “A Thousand Years Over a Hot Stove” by Laura Schenone (click on image for larger view) 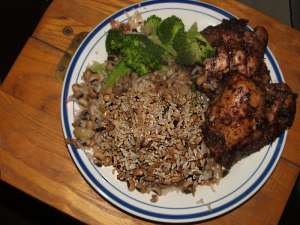 At last the weather is warm!! We celebrated the sunny brilliance of the last week of May by cooking jerk chicken on the barbecue. And to go with it we decided to have lots of broccoli (there’s tons more broccoli hiding under the rice) and red beans and rice.

Well, actually, it was black-eyed peas and rice. We were reminded about this from reading Laura Schenone’s book “A Thousand Years Over a Hot Stove”, which is a fascinating look at how women have altered the history of North American cooking.

Or is it how women have altered the history of all cooking? It’s a little confusing at times. Schenone is really intent on righting the wrongs of previous history books that have concentrated mainly on men’s contributions. But I think she goes just a little overboard in the other direction. I mean really. All women did ALL the cooking? All women made all the decisions about what to eat? Without them nobody would have eaten?

But in spite of her odd opinion laced into the narrative about women doing everything, the book is fascinating. And just as fascinating are the recipes that appear in sidebars. The black-eyed peas and rice recipe is from a very early American cookbook “The Carolina Housewife” published in 1847.

Most often when slave women excelled, they did so by mingling the techniques, flavors, and ingredients of three continents: Europe, North America, and Africa. […]

One pound of bacon, one pint of red peas, one pint of rice. First put on the peas, and when half boiled, add the bacon. When the peas are well boiled, throw in the rice, which must be first washed and gravelled. when the rice has been boiling half an hour, take the pot off the fire and put it on coals to steam, as in boiling rice alone. Put a quart of water n the peas at first, and if it boils way too much, add a little more hot water. Season with salt and pepper, and if liked a sprig of green mint. In serving up, put the rice and peas first in the dish, and the bacon on the top.

We immediately decided we HAD to try it.

Of course, we decided against boiling the bacon. Eww…. Instead we (when I say “we”, of course I mean “he”) cooked the bacon, rice and black-eyed peas separately and then

Why on earth haven’t we been eating this more often?

Oh, and the jerk chicken? It too was fabulous. (Let’s play “The Glad Game”: I’m GLAD that a whole bag of red onions sprouted so badly that only the green sprouts were edible and we suddenly had a huge amount of green onions so we HAD to make Jerk Sauce!)

The Victorians certainly do have a LOT to answer for, don’t they? Think of the ridiculous clothing they insisted people wear as well. According to Schenone, the flavour-free insanity was more confined to the north of US than the south. 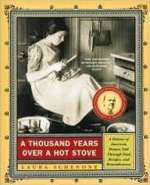 In the emerging Victorian home, restraint became a symbol of… good morals. Women eliminated alcohol and seasonings from recipes. They strove to make the food taste adequate but not too delicious lest it tempt their husbands and children into overindulgence or the dark sensual side of human nature. […]

Though the northeastern literary ladies may have dominated the cookbook market, their vision was certainly not the prevailing reality in the United States at large. In the epicurean South, for example, cooking, and for that matter most social institutions were shaped by slavery. In the homes of wealthy whites, women in the kitchen were not idealized mothers and wives but black slaves. […] The ideal image of womanhood, for the slaveholding plantation wife, was hostess – not cook. Her center of power rested not in the kitchen but in the parlor and the dining room and in her authority over slaves. As mistress, it was her prerogative to be ignorant of cookery if she chose. The three first “southern” cookbooks of the nineteenth century – ‘The Virginia Housewife’, ‘The Kentucky Housewife’, and ‘The Carolina Housewife’ – featured nary a word of moral advice, but instead, wonderful recipes for exotic items like gazpacho soup, ice creams, barbecued shoes, and spicy seafood.

All this was rather objectionable to the northern domestic ladies who believed that cookery (preferably plain) was essential to white Christian womanhood.

It’s really fascinating to read about the African influences on cookery. Apparently, most of the southern recipes were transcribed from the recipes used by the southern kitchen cooks – ie: slaves. I’m also amazed to learn that there were slaves who cooked cakes, bread, etc AFTER their chores were done, and then went to the market to sell their wares. (I gather this was to get enough money to purchase their freedom. The glitch was that their owners – it really sticks in my craw to even write “owners” when talking about people – would take a cut of their earnings so it took decades to earn enough. One woman finally managed to buy her freedom not long before the end of her shortened life (she was 65 when she died).

We’re only half way through Schenone’s book that is full of interesting looking recipes – I’m particularly intrigued by the recipes for “red rice” and “molettes”. I love that she transcribes the actual recipe and then gives her ideas for how to change it (but not so much that it won’t still be similar to the original dish).

And I am very curious to see how the rest of the book will unfold. We’ve just reached the section about the settling of the west. I must not have been paying attention in history class at school. I had no idea that California, New Mexico, Texas, Arizona, Nevada, Utah and Colorado were all part of Mexico before the USA invaded Mexico City in the Mexican/American War in 1845 nor had I even heard of the Treaty of Guadalupe Hidalgo.

It has also come as a great shock to learn that the US government sanctioned the slaughter (yes, that’s right!!) of the bison to push the Plains Indians out and make the area ready for farming. Yikes. Are all governments short-sighted? (I don’t know whether the Canadian government was just as foolish but it wouldn’t surprise me in the least.)

Strong winds of change came with the European settlers coming to North America. As settlers moved into the centre of the continent looking for land to farm, minerals to mine and towns to build, the natural home of both the native people and bison diminished. Historical accounts suggest there were 60 million bison in 1800, and in 1899 there were less than 1000 bison left.

Read more about the history of bison here:

Ha!! How quickly we forget! I see that we had Jerk chicken with rice and ‘peas’ way back in 2004. And that time, we actually used red beans. Remind us to have this combination more often. It’s brilliantly good.