summary: toaster ovens are great when they work, but they sure don’t last very long;

I was recently chastised for saying the following:

We LOVE our toaster oven, using it all the time for reheating, to cook open-faced grilled sandwiches, broiling and baking.

Now, I’m not being chastised for saying that we use a toaster oven for cooking. No. No. That’s okay. Because we do use it!! All the time.

Apparently, the problem with the statement is that it implies that we have a really good toaster oven.

Alas, this is not the case. Even though our toaster oven does work (in its own fashion) and even though we use it all the time, it stinks. It’s a terrible toaster oven.

The first toaster oven I had WAS a good one. But because of planned obsolescence, it only lasted about eleven years.

Within two or three days of its purchase, something went wrong. What was it? I don’t remember. But it was clearly a flaw. We took it back to the store and without any argument, were given a replacement.

HOW ON EARTH did we not notice that the stupid thing will not ever go on “bake”? It only broils or toasts. (It’s SUPPOSED to go on bake in the “bake” setting. Only the top element lights up on “bake”. We just have a faulty oven.)

Within a relatively short time after we got it, the white outer covering was irreversibly stained brown. This photo was taken about a year and a half ago. The brown stain is even worse now!!

Who makes a covering for a toaster that will not be able to withstand heat?!

The rack has no guard or lip at the back to stop things from falling off. Countless pieces of toast have fallen to the back to burn.

The oven has a ridiculous system for turning it on and off. One dial is for the temperature. Of course, the thermostat has never been even close to being correct. Did I mention that the temperature markings disappeared after about a year?

Who puts temperature setting markings on with paint that will wash off with dish soap and water?!

A second dial is to turn the oven to “bake” (ha!!), “broil”, “toast” and “off”. (Those markings disappeared entirely a couple of years ago.) A third dial is a windup little timer for the toast setting.

Yes, that’s right. To make toast, one of us has to turn the first dial to the hottest temperature, turn the second dial to “toast” and finally turn the third dial to the time we’d like to toast. If the timer finishes with a little ding of a bell, the oven turns off (leaving a little light on to show that it’s on the “toast” setting). Of course, the little timer has to be turned twice, in order to get bread toasted – the thermostat is off, remember?

Recently, the timer has been refusing to finish, meaning that if someone forgets to turn it off “toast” setting, the oven stays on. 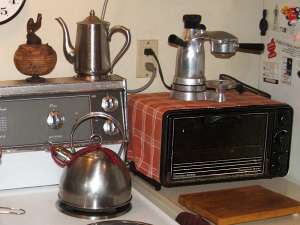 Should we ever decide to break down and buy a new toaster oven, the sad thing is that I can’t remember what kind of toaster oven we have so we can avoid that brand. And looking at the oven won’t help. All the markings have disappeared.

I can’t WAIT til this toaster oven breaks so we can get a new one!!

Of course, we’re terrified of having to buy a new toaster oven. I bet ALL the toaster ovens have computer chips in them now. OH boy. More stuff to fail. And faster too….

1 response to “More about our toaster oven”