summary: in praise of beans; bean curry; information about My Legume Love Affair (click on image to see larger views and more photos) 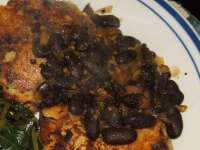 In the past month or so, we have been rediscovering the wonders of beans: with pasta, on toast with and without cheese, as a side dish with a grilled chop, in chili, refried beans casserole, etc. etc.

Oh yes, and in Indian curry.

Sometime in January, T made spectacular blackeyed peas curry to go with palak paneer. And because that was so good, he made a chickpea curry to go with beet greens made with Indian spices rather than dill.

The other day when we were feasting on aloo chops, we realized too late that there was left-over Romano bean curry in the fridge that we should have heated up. Silly us. It would have been fantastic.

So we had to make aloo chops again. But someone (not to point any fingers but whose first initial is E) had already eaten the left-over Romano bean curry for lunch so T made bean curry, this time using kidney beans. To make the bean curry, he basically follows our chicken curry recipe and puts in beans instead of chicken.

Canned beans can be used but we usually prefer to use dried beans. They are generally firmer and taste better. And dried beans are easier on the pocketbook too.

I love the different flavours of the various beans in the curry. So far we’ve only tried four different beans. Garbanzo beans are wonderful and nutty. Black-eyed peas give the curry a slightly wild outdoorsy taste. Romano beans are slightly chocolatey. Kidney beans are richer and almost meat-like.

A few hours before you are going to make the curry, sort (to remove stones) and wash the beans well. Put the washed beans in a big pot and cover with fresh cold water. Remove any beans that are floating. DO NOT ADD SALT. Bring to a boil. Immediately turn down to a low simmer. Simmer 1 to 2 hours partially covered. After an hour of cooking, check to see if beans are the consistancy (in terms of softness) you like. If not, simmer a little longer. When they are the right consistancy, add salt. This stops the beans from getting much softer. Remove from heat and set aside until it’s time to add them instead of fish or chicken to the curry.

* After washing well, beans can be soaked in plenty of cold water overnight as well. In the morning, remove any floaters, drain the beans, rinse and cover again with plenty of fresh cold water before cooking. The beans that float are damaged slightly and may contain the enzyme that will cause gut pain. The same goes for the soaking water. The amount of nutrients lost by discarding the water is negligible (or at least that’s what I think).

* Canned beans can be used as well. Drain and rinse the beans first. The liquid in canned beans is often a bit stinky, murky, and oversalted. 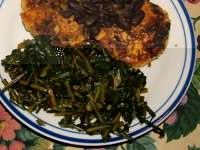 We had the aloo chops for dinner that time (aloo chops aren’t just for breakfast!) and served sauteed dandelion greens with them.

Hmmm, is it lunch time? I wonder if there is any left-over bean curry in the fridge….

My Legume Love Affair (MLLA)
A while back, Susan (The Well Seasoned Cook) created this event to celebrate and expand our legume repertoire. She wrote:

This month, Courtney (Coco Cooks) is hosting and has chosen “starters and desserts” as the theme.

Now bean curry isn’t exactly a starter or a dessert so I’m NOT entering them for the MLLA#10 round up… but I’ll try to get something together in time (30 April 2009 is the deadline for MLLA#10). If not, there’s always the next MLLA.