summary: recipe for Jalapeno Cheddar Buns based on Tracey’s (Tracey’s Culinary Adventures) recipe for Jalapeño Cheddar Rolls; submission for YeastSpotting and Bake Your Own Bread; (click on image(s) to see larger views and more photos)

A few days ago, on our PBS station, we watched Steve Sullivan making bread with Julia Child Baking With Julia: Decorative Loaves with Steve Sullivan. The only yeast in his starter was what was already in the old dough. We both said, almost simultaneously, “We’ve got to try that!!”

edit 2018: (the video located at video.pbs.org/video/2250834031 “may be unavailable in your area”. It WAS available in our area at the time of posting, then disappeared and was available again for a moment in early 2018, but now it’s not

The link now points to a YouTube video. -ejm) 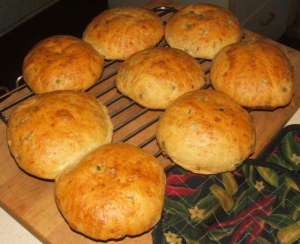 My nephew and his wife recently alerted us to the wonderful sounding coffee chipotle pulled pork on the blog, Tracey’s Culinary Adventures. Pictured with what sounded like fantastic pulled pork are the most beautiful buns. Buns made with cheddar cheese and jalapeno peppers.

I neeeeeeeeded to try those buns!

Unlike Tracey, the only pepper plants we have are cayenne and Thai. I’m sure those would be fine but maybe just a little too hot for the buns. Not to mention that I don’t think we have enough little peppers to fit into all that dough. So we jumped on our bikes and rode to the market to get jalapeno peppers.

I’d already made fougasse dough for that night. When I was shaping the fougasse, thinking about what I’d seen Steve Sullivan do, I held back a walnut sized piece of dough, kneaded in a little water and flour, put it in a covered bowl and set it aside for the next day.

And the next morning, I got cracking, getting out flours, yeast, salt, eggs and cheese. I put the egg into a bowl of hot water to bring it up to room temperature. And grated the cheese.

I washed and quartered the jalapenos and seeded them. I didn’t want the bitterness of the seeds in the bread. But I left the pulp that was surrounding the seeds. I knew we wanted that heat! And as I cut the peppers, I could smell that there was heat. And I repeated over and over to myself:

Then, at last, it was time to mix the dough. Tracey used her stand mixer. I don’t have a stand mixer. So I made an executive decision about those Jalapeno pepper pieces. I’d add them later. The idea of hand-kneading them for 10 minutes was just a little too nerve wracking.

I put the piece of old dough (hmmm, nothing much had happened to it but it couldn’t hurt to use it) on top of the just mixed dough. I didn’t chop it into little pieces. It just doesn’t seem necessary if I’m hand kneading. 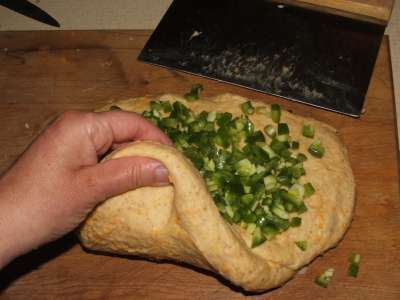 And I repeated over and over to myself: 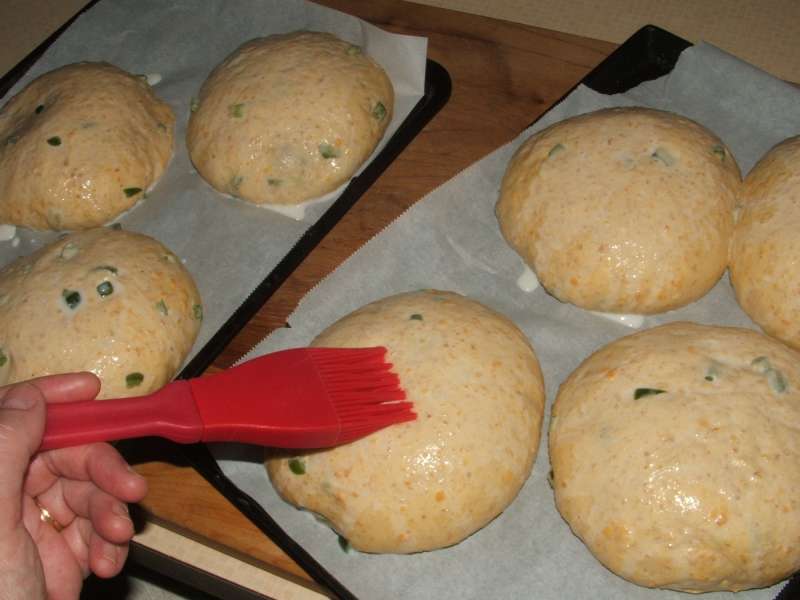 Then, I put the dough into the bowl, covered it with a plate and left it on the dining room table to rise. The dough was ready for shaping around 13:00. It doubled in no time, ready for baking at 15:00. (It was probably ready a little earlier. I have a bad habit of letting things over-rise in the summer. I’m just not used to having the house warm.) I brushed the buns with milk, popped them into the oven and we drank in the incredible aroma as they baked.

Here is Tracey’s Jalapeño Cheddar Rolls recipe. And here is what I did to it:

1.) Yeast: Tracey calls for 1.75 teaspoons yeast. Being the renegade I am, I decided to use less because I was also using less sugar.

2.) Jalapenos: Many sources say to wear gloves when cutting hot peppers. I just can’t be bothered. BUT whenever I handle chiles, I do have a running chorus “DON’T rub your eyes” going constantly in my head. Granted, it has been quite some time since I’ve made that mistake. But the memory is vivid.

3.) Sugar: Tracey calls for 3 tablespoons of sugar. I just couldn’t add that much! But next time, I’ll had half of the sugar to the dough and scatter the other half onto the jalapeno pepper pieces. I like the idea of them getting caramelized when they’re baking.

4.) Milk wash: Tracey calls for using an egg wash. It’s the protein that produces the shine so I prefer to use milk instead of wasting an egg.

5.) But I LIKE warm buns! If you wish to serve warm buns, reheat them after they have cooled completely. To reheat uncut bread, turn the oven to 500F for 5 minutes or so. Turn the oven OFF. Put the bread in the hot oven for ten minutes. This will rejuvenate the crust perfectly.