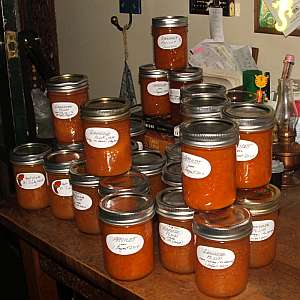 Now that my sister has selfishly taken her jamming book home, I had to return to using the internet for reminders of steps to take when jamming. I know. It was only a week ago. You’d think I’d be able to remember all the steps…. Luckily for me, there are Alanna’s (A Veggie Venture) Practical Home Canning Tips. They really are invaluable.

After reading that many people make jam without pectin in the comments about our recent adventure in sweeeeeeeeet jam making, I was determined to make jam less sugar and perhaps without added pectin. I scoured the internet for jam recipes to see how much sugar and pectin the world at large used. Here’s what I learned first about pectin:

Pectin does require sugar and acid in order to thicken. Make sure to follow your recipe and be cautious about substituting one brand for another because they do have unique gelling properties. Pectin is available in both liquid and dry forms. gourmetsleuth.com –Dictionary: Pectin

But I have to tell the truth; I now have a horror of boxed pectin. Have you looked at the ingredients lists? The powdered pectin boxes I looked at all contained fructose and/or dextrose. Even though Certo Liquid pectin (“Pasteurized solution of refined pectin in 2 pouches.”) does not have any added sugar, it annoyingly comes in foil envelopes of 95ml each. WAY too much pectin for the amount of fruit I am working with.

I’d have tried Pomona’s pectin (“a sugar-free, preservative-free low-methoxyl citrus pectin that is activated by calcium”) if I could find it (but I would have had to borrow some designer clothing so I’d be allowed to enter Whole Foods to look there – I have a sneaking suspicion that’s the only place here that would sell it.)

I believe that apricots have a lot of pectin naturally (you wouldn’t believe how thick and gluey the apricot jam made with liquid pectin is!) But I decided I wanted to make other kinds of fruit jam without added pectin. Onto the internet…

Fruits with naturally high pectin content include citrus fruit such as limes and lemons, berry fruit such as cranberries, loganberries, redcurrants and blackcurrants, and tree top fruit such as quinces and apples. […] Fruits with naturally low pectin content include tree fruits such as figs, cherries, nectarines, pears and soft berry fruit such as late varieties of blackberries, strawberries and elderberries. Edible stems of forced rhubarb and early and maincrop varieties of rhubarb, frequently treated like a fruit in preserves, are naturally low in pectin content. […] Stone fruit such as peaches, plums and apricots have moderate levels of natural pectin. practicallyedible.com -orchards-fruit-gardening.suite101.com: Natural Pectin Content of Berry and Tree Fruits: Basic Guide to High to Low Pectin Fruit for Making Fruit Preserves orchards-fruit-gardening.suite101.com/article.cfm/natural_pectin_content_of_berry_and_tree_fruits

Hmmmph! I don’t believe them about the apricots and plums. I went ahead to make apricot and plum jams without any added pectin at all. 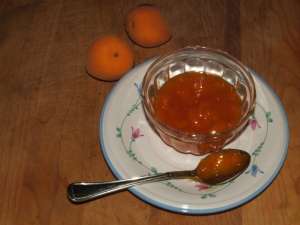 One of the things that really amazed me was the smell of the apricots. Or lack thereof. The apricots looked beautiful. But they smelled like nothing at all. Then as I started cooking the first batch of apricots, I got alarmed. Suddenly, there was the distinct smell of food cooking with sugar. But it wasn’t apricots that I smelled. It was pumpkin!! Yes, that’s right. Pumpkin. How weird was that?

I kept stirring, hoping the smell would go away and was particularly happy to note the wonderful aroma of apricot just as the mixture began to bubble. I wondered if this were an aberation. But exactly the same thing happened with the second batch of apricots.

Just before I was going to process the apricot jam, we realized that it was essential to make the plum jam IMMEDIATELY. There were two baskets of yellow plums that were going to burst if I waited til the next day as planned.

Sigh… Plan ahead!! I didn’t have enough jars. I jumped on my bike and raced to the hardware store to get more jam jars. Ha! Half an hour before they closed for the day!

I was worried about oxidation. Because I know everything there is to know about jam making (*cough*), I decided to put the sugar in the bottom of the pot and dump the chopped plums on top. And I continued pitting and chopping plums. Plums are not nearly as easy as apricots to pit. Plums are very juicy. Plums get slippery when they’ve been sliced in half….

Once the 6 o’clock news headlines were over, T came in to help with the chopping. And finally the chopping was done. By that time the plums in contact with the sugar were busily releasing juice. Very liquid!

I measured the last of the Sicilia lemon juice to discover I was 4 Tbsp short. Oh oh. But we had actual lemons! One lemon produced the necessary 4 Tbsp. And I began cooking the plums. They took forever to come to a boil. They were VERY liquid. Then there was LOTS of foam. And of course, with four kilos of plums and 1600gm sugar in our biggest stock pot, the foam wanted to boil over. So I started skimming it. And kept boiling and boiling the plums til they looked to be about right and smelled amazing. (Mmmmm, plums!!)

And I thought I was ready to process. Hmmm. Still ridiculously liquid.

We looked at all that foam. We tasted it. (Delicious!! Lemony chiffon) I put it back into the plums and brought the mixture back to a boil. Almost all of the lemony foam went back in. Still ridiculously liquid.

I processed the plums anyway. And now we have jars and jars of delicious plum and apricot jams.

Apricot and Plum Jams with NO added Pectin
apricot . plum

:: I did the processing in two sessions. I started with the apricot jam and some the plum jam then left the rest of the plums to sit on the counter overnight and processed the plum jam (or is it sauce?) the next morning.

:: Next time, if we have 4kg of fruit for jamming, I will cook half of it first, leave that on the counter to rest and then cook the other half. I’m pretty sure that one of the reasons for the plum jam failing to become jam was because the pot was way too full. 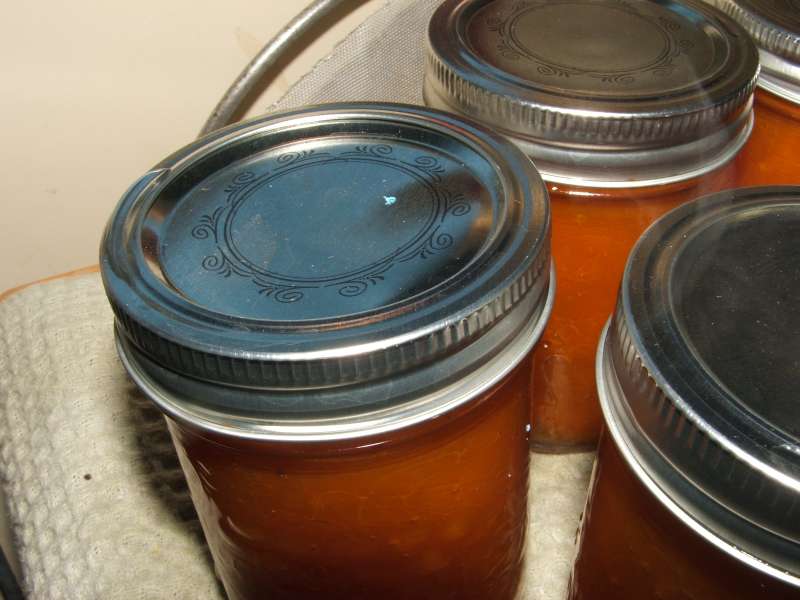 And now we have jam galore! Well, we have apricot and plum jams galore. One of the apricot jams we have to eat right away. (Poor us. :-D) The seal bubbled. After 24 hours of sitting, the seal looks just ever so slightly uneven but still, better safe than sorry.

And we have several jars of delicious very loose plum jam. (The adventure in making jam without added pectin is still a work in progress.) Okay Okay Okay. It’s NOT jam. It sauce. It’s delicious sauce though!

Did I hear someone say waffles?

This event was created by Alex (A Moderate Life) with the idea that each “Two for Tuesday” post would contain two things (two recipes, two links, two variations on a theme… as long as the post is about real food. Alex, Heather (girlichef) and five other bloggers have joined forces to co-host this week. Heather wrote:

High 5! I did it!! I made jam without using pectin. All by myself.

Oh, and about the really sweeeeeeet jam we made last week? T has been spooning bits of it into his Sangria rather than adding sugar.