summary: new (for us) methods for scone making; Zachary Golper’s method in his book “Bien Cuit” being radically different from anything we’ve seen before; our take on Golper’s scone/biscuit shaping method; difference between biscuits and scones; brief review of ebook version of “Bien Cuit”; 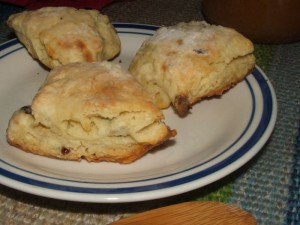 Sometime last month, when we were walking home after taking the car in for its quarterly checkup, we passed by a new bakery cafe. We had to see! We bought a cup of coffee (pretty good but maybe a little pricey) and a fancy blue cheese and walnut scone.

Okay, right away, I was being a little overly critical. To me, scones NEVER have anything but currants (or possibly raisins, if currants aren’t available) and a little nutmeg.

Blue cheese and walnuts, as wonderful as they are, do not belong in a scone. Nor should a scone be particularly moist. After all, as much as they might seem to be similar, scones are not at all the same as baking powder biscuits.

And T decided that he had to make scones just like the ones that we had bought at the new bakery. Onto the internet he went and found the following:

Lofty, light, well-balanced, perfectly textured, and utterly delicious scones. This recipe produces such fantastic results that I rarely stray from the basic formula […] [A]lthough the formula is important, the MOST important aspect of making the best scone possible is the technique. No formula can make up for poor technique. And by poor technique, I mean use of less than VERY COLD butter and liquid, warming of these very cold ingredients in the creation or shaping of the dough, or over handling the dough while creating or shaping it. In addition, the way in which the butter is incorporated into the flour is CRITICAL to the flakiness and tenderness of the scone.

-Susan S. Bradley, The Best Scones in the Entire Universe, The Luna Cafe

Susan’s method was fabulous. What we made using her method didn’t fit my definition of scones, but I didn’t care. They may not have been the best scones in the entire universe, but they were certainly the best baking powder biscuits we had had in a long time.

They were better than the new bakery’s so-called scones. They were easily as good as the biscuits Mum used to make. They were almost as good as my sister P’s biscuits.

Needless to say, we were ecstatic.

Then, not long ago, I broke down and bought an e-reader. I borrowed the ebook version of Bien Cuit from the library to see how it differed from the hard-cover version.

I admit that I didn’t really expect to be reading the book so closely again so soon. But I was called for Jury duty and it turns out that there is a LOT of time to read while waiting to be called into a courtroom.

So, in playing with my new e-reader and learning how to make notes and bookmarks, I re-read several sections. I was particularly interested in my re-reading of the scone section. Once again, I ignored the Golper’s additions of candied lemon, or bacon, or basil. Instead, because of the following passage, I concentrated on the mixing method.

English scones […] are a type of tender, unyeasted bread […] [I]f you don’t eat a well-made scone over a plate or napkin, you’re definitely going to get crumbs on your shirt or the table. Good scones are crumbly; that’s part of what makes them so crisp yet tender. 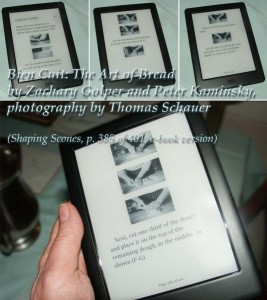 There is a photo essay that goes with the mixing method – note that images and label letters are quite small in the ebook – this would be a reason to get the print book.

SHAPING SCONES
Empty the scone dough onto a floured surface. Bring together then flatten with a plastic scraper (A-B)
Cut the dough in half and place one half on top of the other (C-E)
Next, cut one-third of the dough and place it on the top of the remaining dough, in the middle, as shown (F-G)
Cut the remaining third and place it on top of the two layers (H-I)
Flatten (J) and repeat two more times.
Cut into six even pieces (K). Turn each piece on its side and flatten slightly to create an oval (L).

But. Wow! This really works; we tried it, except for the final turning over after cutting the scones just before baking.

The result was a tray of the most wonderful biscuits (T insists on calling them scones). They are lofty and lightly layered, pulling apart beautifully. Because they’re supposed to be scones, all they contain is nutmeg and currants. Raisins would also be permissible if there were not currants available.

This is a slight variation of Zachary Golper’s method: 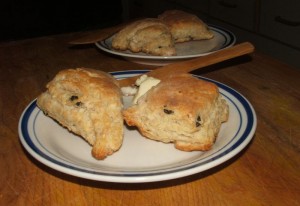 In fact, they’re easily as good as P’s biscuits!

In spite of the fact that to fit into my definition of “scones”, they are still too moist, I’m cannot stop eating them. They’re phenomenal!

Bien Cuit: The Art of Bread by Zachary Golper and Peter Kominsky, with photographs by Thomas Schauer

In the slightly more comprehensive review of “Bien Cuit”, I wrote the following after reading the hard-cover version:

Really? White print on black background? Bien Cuit’s art directors are crazy! Do they ever try reading the text after they’re finished making it pretty?

– me, Do I need another bread book?, blog from OUR kitchen 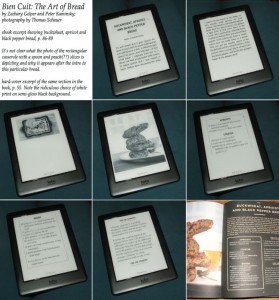 This photo essay is a comparison of the ebook and hardcover versions of “Bien Cuit: The Art of Bread” by Zachary Golper and Peter Kaminsky: Buckwheat, Apricot and Black Pepper Bread recipe.

In the hardcover version of Bien Cuit, Thomas Schauer’s photos are spectacular. The recipes are arguably a little difficult to read because of the white print on shiny black background.

In the ebook, mercifully, the background is white but the print for some of the equivalent pages is grey rather than black. Some of the photos appear out of order. (I have no idea what the rectangular casserole dish is doing there on the page between the intro to the Apricot Black Pepper bread and the photo of slices of the bread stacked.

And of course, in the ebook, all the photos are in black and white AND on the small side. (I noticed that the how-to photo essay images were on the small side in the hardcover as well. Clearly, the book designers have really good eyesight and don’t care about the people who have to wear reading glasses.

(Read a review of the hard cover version of Bien Cuit)

The price is on the high side at around Cdn$50 for the hardcover, or Cdn$21 for the ebook. Still, if we didn’t already have lots of bread baking books on our shelves, I’d say Golper’s book is definitely worthwhile buy. In fact, I wish I could trade it in for my virtually untouched copy of “Local Breads” by Daniel Leader.

I used to live down the street from a very charming all-day eatery. […] Theoretically it was the perfect spot to cozy up with a scone and a pot of tea on a “sick” day. But no, this was not a scone I would partake in. In fact, I was so offended by this scone that it still annoys me to this day.

What [they did] was simply fold lemon zest and dried fruit into a buttermilk biscuit dough. A great way to streamline your prep list, sure, but it was also an excellent move to get on my last nerve. I’ve been accused of getting upset about the wrong/small things and not enough at the big stuff.

Point being, a biscuit is not a scone. Sure, they’re made up of almost the same stuff—flour, leavener, fat, dairy—but they are two altogether different things and you better not try to trick me into thinking one is the other.