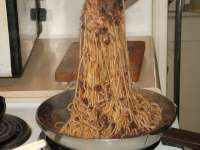 Very early on in this blog (long before we had a camera), I said that Blackened Chillies and Broccoli was our favourite sauce for spaghettini. It’s still a favourite and we have it often. So often that we don’t even think about getting out the camera – we’re so certain that I must have posted about it thousands of times.

But we have other favourites now. And one of them is “Skyliner Chili” (yes, I know; the real restaurant is called the Skyline but I kept making a mistake early on and can’t seem to correct it).

If we’re really pressed for time, we get my chili out of the freezer. But if we decide early enough in the day, T whips up a variation of Borlotti Pasta Sauce, using smoked sausage and/or ham and lots and lots of Romano beans. I adore this dinner!!

I’ve only been to Cincinnati once and that was before I’d ever heard of the Skyline Diner and I’ve never had real Skyline Diner chili (5-way). So I’ve only had our version of this fabulous spaghetti sauce. I can only hope that the real thing is as good as ours. And trust me, it’s really good. Or… don’t trust me. Make Skyliner Chili and taste for yourselves. 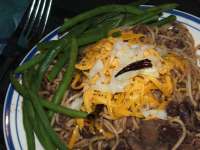 It’s really pretty simple – just chili con carne made with LOTS of beans (usually Kidney and/or Romano beans) tossed in spaghettini and topped with grated cheddar, finely chopped onions, blackened chilis and crackers. (Actually, I usually forgo the crackers but T says they’re essential.)With a green vegetable on the side, this is one of the most satisfying dinners!

Serve immediately with a green vegetable.

* Use Romano (aka cranberry, borlotti, saluggia), kidney, pinto or whatever beans you prefer. We think dried beans end up tasting better than canned (and the dried beans are much cheaper). If you don’t have dried beans on hand and imagine that it’s too much work to deal with them (it’s not), use good quality canned beans. The final volume of beans works out to be 1 to 1½ cups

** This might not seem like a presto sort of dinner but if you have chili in the freezer (we usually do because we make it in big batches and freeze it in dinner-sized portions), then the only time spent is in preparing the garnishes and cooking the pasta. 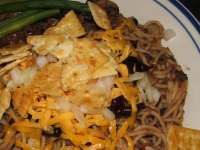 I like my skyliner chili served “4 way”: chili, onions, cheese and just a few blackened chilies. T, on the other hand, likes it “5 way”: chili, onions, cheese, crackers and lots of blackened chilies. (Yes, it might look a bit like dog’s breakfast but put these dishes on a candle lit table and suddenly they’ll look like they’re for a king’s banquet.)

I must admit that the crackers are really really good and lend a lovely bit of crunch. But for me, they also add just that extra bit of richness making the dish just that much too rich (if that’s possible).

And you? How many ways do you prefer? There’s plenty of time still to make this tonight….

Presto Pasta Nights
Some time ago, Ruth (Once Upon a Feast) created this lovely event for people to share their favourite pasta dishes. Too late for this week’s session hosted by Ruth herself (the round up for 107th session will be posted today), I am submitting this for Marye (Baking Delights) who will be hosting the Presto Pasta Nights 108.

1 response to “my other favourite spaghetti sauce: skyliner chili (PPN)”