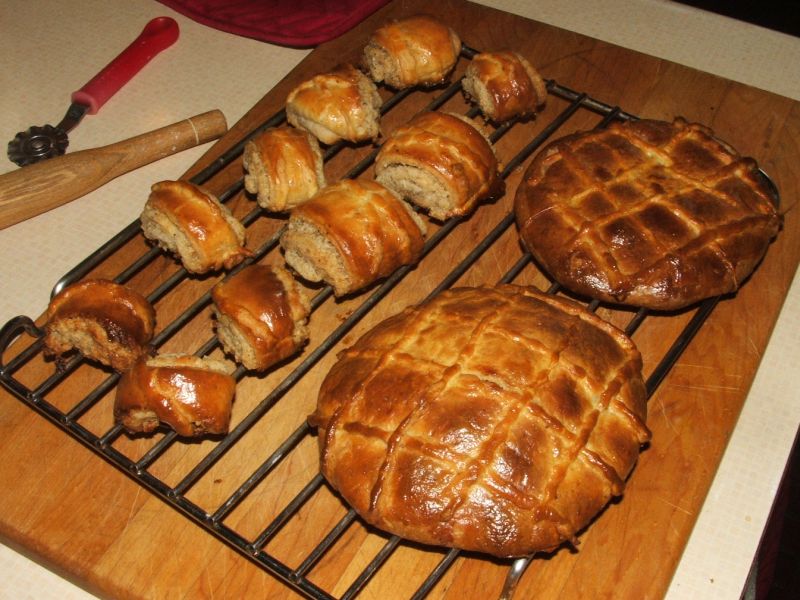 Easter is approaching, so Kelly (A Messy Kitchen) cleverly chose an Assyrian confection, Nazook (or should it be spelled Nazuk? Or is it Nazouk? Or perhaps it’s Nakhshoon…). In Armenian, it is called Նազուկ. But whatever it’s named, it’s delicious!

Nazook is popular in Armenia and Azerbaijan. In Armenia, it is made year-round, but apparently especially for Easter, as well as the festival of Ascension that takes place 40 days after Easter. In Eastern Armenia, the pastry is called Gata. (My Armenian friend, originally from Yerevan, which is smack in the middle of Armenia, knows it by both names. She directed me to look at her favourite recipe “Aznive’s Nazook”.)

Nazook is also made in Iran – and possibly any place that was at one time part of the Persian Empire.

Nazook is a Persian pastry that my Iranian grandmother has been making for me for as long as I can remember. No one makes nazook like her, and it is the perfect accompaniment for a hot tea or coffee. The flavor is buttery, sugary, and downright incredible.

– Nicole, Creatively Hungry | Nazook (Persian Pastry) – was at creativelyhungry.wordpress.com/2012/06/25/nazook-persian-pastry/
Sweet nazuk is perfect with tea, delicious and easily suits for decorating. […] This is an excellent [flaky] pastry that can be eaten practically anytime of the day.

– Aznive, Aznive’s Homemade Foods and Desserts, Armenian traditional delicious Nazook (Stuffed sweet bread)
I turned to the master pastry baker in my family, my Aunt Aida, who’s been baking nazook for decades. Her nazook is absolutely perfect, much better than the best stuff you can buy in Glendale grocery stores. […] A little on this pastry’s background: Aida tells me that other Armenians eat nazook, too, but they might call it gata (gata is what Persian-Armenians reserve for a specific type of round cake). Armenians prepare it usually around the time of Easter, and it is eaten for 40 days through Ascension. I’m not sure it has any religious significance except for that this time usually involves friends visiting each other, and nazook is a nice pastry to serve along with coffee

The dough for this is yeasted, but it didn’t seem to want to rise at all. It was closer to strudel dough….

13 March 2018, 10:48 I’ve decided that it would be craziness to try this with wild yeast. While it might well work, I just don’t dare – with all that butter and sugar (and major crankiness from 100% of the inhabitants if the rise fails).

After all, here’s what the inimitable Susan says:

One of the questions I get asked most often is how to take a bread recipe and substitute sourdough starter for baker’s yeast. The short answer, in my humble opinion, is: you can’t.

I’m also looking at the gram equivalent for the salt.

I wonder if that is for kosher salt? Because from what I understand from USDA Nutrient Database, “1 tsp = 6gm table salt” but kosher salt is different and depends on the brand.

6 grams of salt makes more sense to me than half a teaspoon. But, then we like salt in sweet things. So I’m going to go with a Baker’s Percentage of 2%, and use 7 grams. (For more ranting about this, please see Salt is salt, right?)

11:55 I’ve mixed the dough. Even though I decided to follow the recipe and use commercial yeast, I strayed with other ingredients.

We didn’t have any sour cream on hand, but we did have cream cheese and yoghurt. So I used a half and half mix. I also decided to add a bit of flax seed. And some wheat germ.

When I began to measure the butter, I ran into a snag. I’m afraid I hadn’t actually read the recipe through and assumed that there would be water. That I would boil. And melt the butter that way.

When, oh when, will I learn to read the recipe??

Combine flour, salt and butter and blend with your fingers until crumbly. Add egg, oil, lemon juice, and sour cream and mix until incorporated. Knead the dough on a floured surface for 5 minutes, or until no longer sticky. Add more flour if necessary.

Ooops!! I had already dumped the yoghurt/cream cheese/yeast mixture into the flour before I even weighed the butter. Which was rock-hard out of the fridge.

So I grated it with the box grater. It turns out that it is dead easy to grate cold butter. And it is also dead easy to mix it into the flour when it has been grated.

I mixed everything with my hands – I did NOT add any more flour – and kneaded the dough in the bowl for about 10 minutes. The dough is now in a covered bowl in the oven with only the light turned on. I hope I added enough yeast! (You must know already that I slightly reduced the amount of yeast….

13:15 I just peeked at the dough. Nope, nothing happening yet. But it’s still early, isn’t it? While I had it out, I turned the dough a few times. It’s beautifully silky.

13:38 Ooops!! Did I mention that I had neglected to read the BBB recipe through? Just to check that I wasn’t crazy, I looked at Naomi Duguid’s recipe as well.

Form into a ball, and to follow tradition, mark with a +, symbolizing a cross. Cover with plastic wrap and refrigerate 5 hours, or overnight.

– BBB March 2018 recipe
Turn the dough out onto a lightly floured surface and knead […] You should have a soft, tender dough. Transfer to a clean bowl, cover with plastic wrap, and let rest for 1 to 3 hours, whatever is most convenient.

And here I was, thinking that I would be baking Nazook this afternoon. I guess not!

I’ll just go down now and put the dough in the fridge, shall I?

…good thing I’m making this a couple of days before 16th! 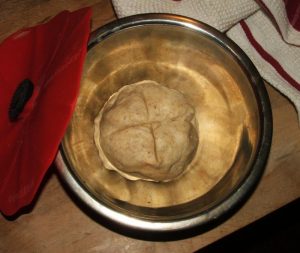 14 March 2018, 10:21 Snow this morning. Again. It’s not much – nothing like the sort of thing that has been smothering the east coast or Europe. But it’s still snow. In the middle of March.

Okay. No more. That’s enough now. (Ha! I hear Mum’s voice echoing those words. And she’s NOT talking about the snow.)

The dough this morning hadn’t budged. It looked exactly the same as it did yesterday when I put it in the fridge. After briefly looking at various places, I decided to proceed anyway.

I really like the round shaping for Gata, so I decided to shape half the dough like that. Uncharacteristically for me, I used an egg wash (I made half a recipe of dough, so I had half an egg left over.) I had too much fun shaping and decorating!

The trays are in the oven now. I hope they puff!

11:57 I just realized that today is Π Day! Which instantly makes me think of Grandpa:

So, how fitting it is that we have the round version of this pastry for this morning!

Pi Day is celebrated on March 14th (3/14) around the world. Pi (Greek letter “p”) is the symbol used in mathematics to represent a constant — the ratio of the circumference of a circle to its diameter — which is approximately 3.14159. 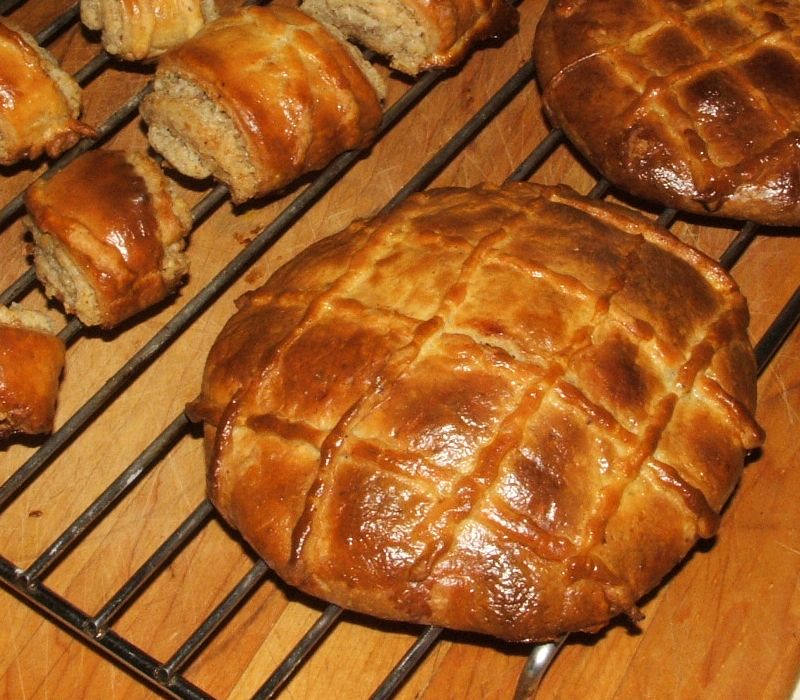 We were really curious to learn if there was any difference in flavour between the two shapes. While both were delicious, we independently chose the smaller version as our favourite. It is a little breadier. But still not very bread-like. I keep wondering what the yeast is there for. 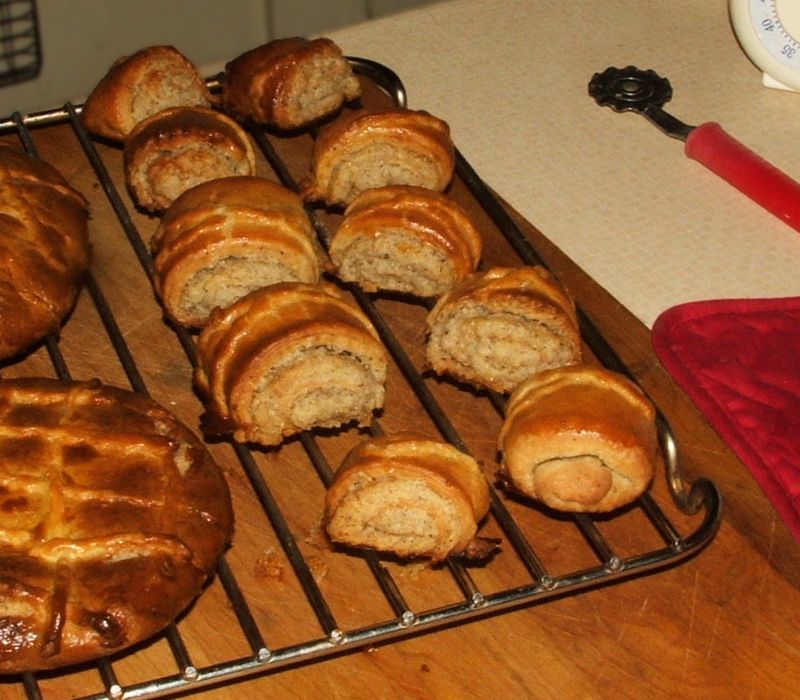 I think I could easily have used our wild yeast to make these. Because it doesn’t seem to matter if the dough rises or not.

But, is this bread? Or is it pastry?

Nazook is irresistible – especially when served with coffee, tea, or even a cup of hot chocolate.

Be warned: once you start eating nazook, it’s hard to stop! If you happen to have any left, you’ll be happy to know that nazook freezes well

-Robyn Kalajian, The Armenian Kitchen: ‘My Uncle Rafeael’ – The Movie; ‘Nazook’ – The Dessert

Many thanks for a terrific choice, Kelly!

Here is the BBB recipe for Nazook that we were given. And here is what I did to make this wonderful pastry:

Nazook/Gata
based on a recipe in “Mom’s Authentic Assyrian Recipes” by Hilda Sterner; decorative shaping for Gata based on the Heghineh Cooking Show Nakhshoon Gata Recipe

Filling (Khoriz) (I was a little bit casual with the measuring for the filling….)

:: Yeast: I still think these could be made with wild yeast. Next time….

:: Sour cream: Next time, we’ll use just yoghurt and no cream cheese at all. The dough seemed to be on the stiff side. 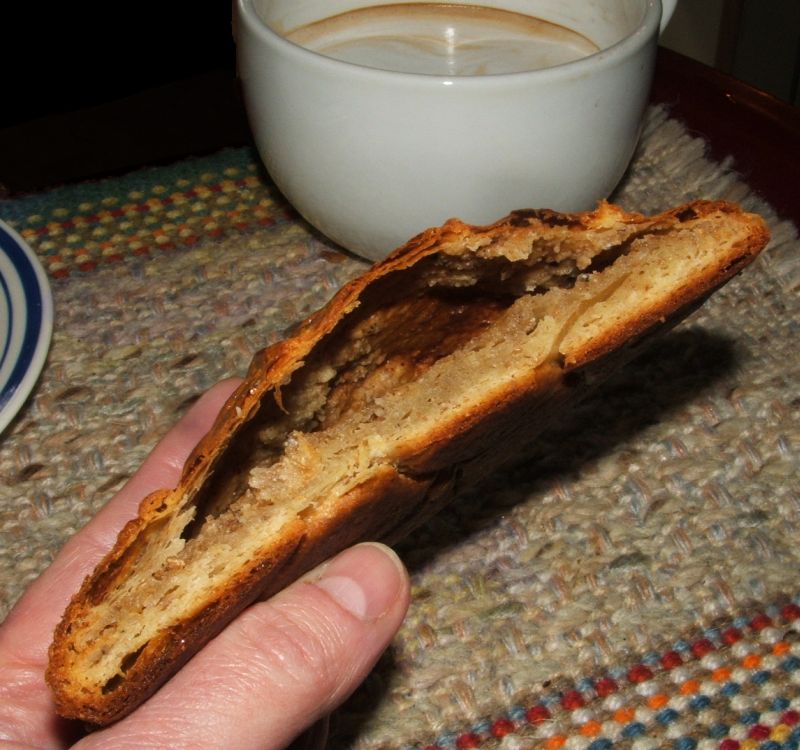 Even though this was made with yeasted dough, it really didn’t rise
– and I don’t think this hole is due to “Lazy Baker Syndrome”. 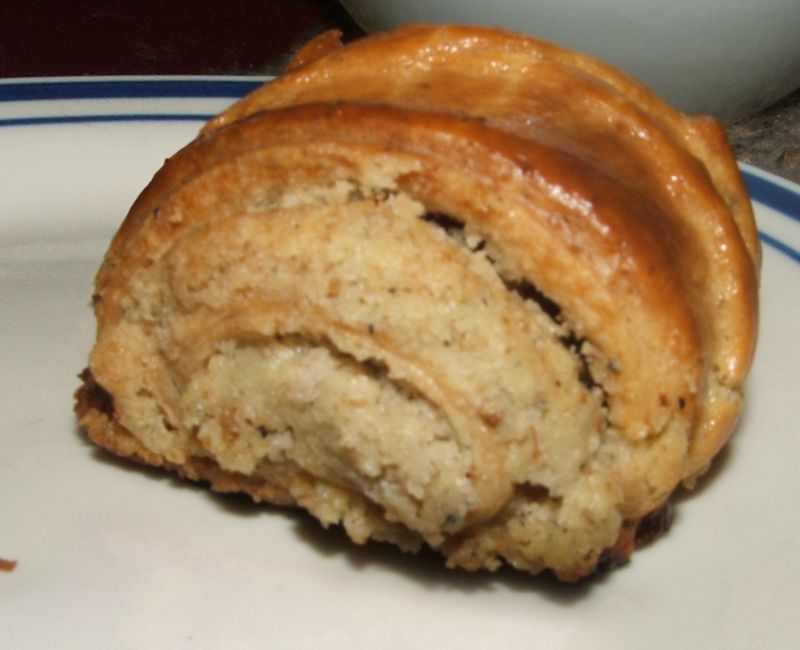 Nazook was much more successful!
(Still no rise, but at least it’s compact.)

To celebrate 10 years of baking together and to look forward to even more bread baking, we devised this new chalkboard logo. 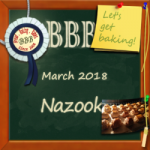 Kelly is the host of March 2018’s Bread Baking Babes’ project. She wrote:

[This] stretches the definitions of bread, but I don’t think that is necessarily a bad thing. It is an Armenian sweetbread and it still has yeast. Closer to a yeasted pastry, […] this is traditionally prepared for Easter so I thought the timing would be perfect for our March recipe release.

– Kelly, in message to BBBabes

So does our kitchen!

And it’s true; Nazook is not exactly bread. But it sure is good! When I emailed my Armenian friend to ask her about tips for making it, she wrote back, “Oohhh now I want to eat nazuk. I even smell it.”

We know you’ll want to make Nazook too! To receive a Baking Buddy Badge to display on your site: make the bread in the next couple of weeks and post about it (we love to see how your bread turns out AND hear what you think about it – what you didn’t like and/or what you liked) before the 29 March 2018. If you do not have a blog, no problem; you can also post your picture(s) to Flickr (or any other photo sharing site) and record your thoughts about the bread there. Please remember to email the Kitchen of the Month to say that your post is up.

Please take a look at the other BBBabes’ March 2018 Nazook:

It’s with deep regret to grasp that Lien will no longer be baking with us regularly. But we wanted to make sure that we kept her beautiful logos on the wall to remind us of her wit and generosity. Here’s hoping she’ll come back into our kitchen from time to time. Often. 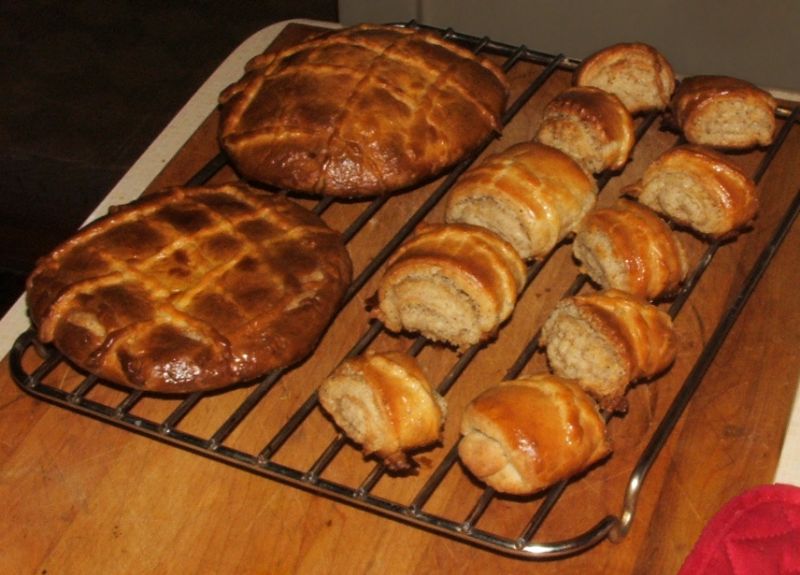