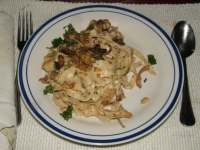 One of my absolute favourite pasta dishes is what we call “Nigella’s Chicken”, based on Nigella Lawson’s recipe for Tagliatelle with Chicken from the Venetian Ghetto* that we saw eons ago on “Nigella Bites” on the Food Network (Canada). Nigella’s Chicken is made with toasted pinenuts and raisins sautéed in olive oil, roast chicken, rosemary (if we have it) and fresh parsley (if we have it) all tossed with T’s fresh egg pasta cut into fettucine.

Inexplicably, we hadn’t had Nigella’s Chicken all winter long. We remedied that situation the other night. It was as wonderful as ever.

Here’s how the conversation went on the day that T announced we would try this the first time:

me: But it has golden raisins. If you have to make it, please use Thompson raisins.

T: No. Nigella says to use golden raisins.

me: (gag) But I hate golden raisins.

T: Really? I didn’t know that.

T: But you’ll love them in this. (wheedling) Come on. Just try it. If you don’t like the raisins, you can pick them out and leave them on the side of your plate.

me: (choke) Won’t that be appetizing? A little heap of squashed flies on my plate. Pleeeeeeeeeease use Thompson raisins!

And he did think about. And made the dish. With golden raisins.

And here’s the thing. For some bizarre reason, golden raisins with roast chicken and fresh egg noodles are phenomenally good. There’s no squishiness. No squashed flyness about the raisins. No pervasive cloying sweet golden raisin taste. All they do is enhance the flavour of the toasted pinenuts and the chicken. 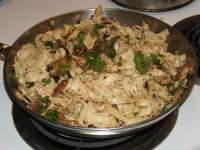 Yes, indeed, as far as I was/am concerned, golden raisins are aok. But only in Nigella’s Chicken… (I still loathe them in anything else).

Here’s how we make Nigella’s Chicken:

Once again, no measurements….

Did I remember to say that I love Nigella’s Chicken? Did I hear you say that you don’t like raisins with chicken, especially golden raisins? You’re wrong.

Make Nigella’s Chicken and admit it. Golden raisins ARE good after all.

What is it that is so good about parsley?

To many people, it seems so innocuous and plain. Relegated to be used as a decorative garnish on so many restaurant plates, to be admired for its greenery and then pushed aside and discarded.

But taste it!! It lends a freshness to so many dishes. On its own, it cleanses the palate. In a dish, it completes and rounds the flavour – especially in Nigella’s Chicken. Nigella’s Chicken is very good without parsley. But with it, it’s sublime.

Many people prefer Italian flat-leaf parsley, saying that its flavour is more intense. We have not noticed much difference in flavour between the two kinds, yet both of us prefer curly leaf parsley. (Frankly, I think it’s prettier.)

Curly leaf parsley makes for a beautiful border around a flower bed. I saw this at a horticultural display. It really was stunningly beautiful around a bed of white impatiens. If we had a sunny rather than shady garden, I would do this. How wonderful would that be to stroll through the garden cutting flowers and parsley to adorn the table?

I confess that in the past few years, I’ve not been overly successful with keeping parsley going in my own garden but that is probably because I have a black thumb. (Or more likely, it is because of our distinct lack of sun.) Happily, parsley is one of the few herbs that does not seem to lose intensity if it is grown in a hothouse, so storebought parsley is almost as good as garden grown parsley.

Some years ago, my sister gave me a lovely illustrated book, Little Herb Gardens: Simple Secrets for Glorious Gardens – Indoors and Out by Georgeanne Brennan and Mimi Luebbermann. It is filled with useful information on how just about anyone can have their own little herb garden. One of my absolute favourite pages is the one about making an instant herb garden:

The simplest herb garden of all is temporary and ephemeral, yet it supplies its owner with daily fresh herbs for cooking and fills the kitchen with the scent of faraway places. […] Parsley, tarragon, basil and dill bring the comforting smell of the damp earth on the edges of meadows and along stream sides.

No matter what herbs you choose for your cut garden, select only fresh, healthy-looking ones. […] Purchase these herbs precut in the produce department […] and put each bunch of herbs in its own glass, lining up the glasses on your windowsill to make a pleasing arrangement. […] Change the water daily. Discard any decaying leaves.

And this is exactly what we do with storebought herbs: wash them well, trim the bottoms off the stems and put them into glasses, coffee cups, or sugar bowls (without the sugar :lalala:).

*The recipe for Tagliatelle with Chicken from the Venetian Ghetto used to be housed on www.stylenetwork.com along with other recipes from “Nigella Bites”. Sadly, neither Lawson’s show nor this fabulous recipe is in stylenetwork’s archives any longer. However, you may be able to see it by plugging http://www.stylenetwork.com/Shows/Nigella/Recipes/tagliatelle.html into the Wayback Machine search window of the Internet Archive. (The recipe is also in How to Eat: The Pleasures and Principles of Good Food by Nigella Lawson.)