summary: recipe for our friend Greg’s No-bake Cheese Cake on a crushed gingersnaps crust with wild blueberry topping; using gingersnaps instead of chocolate wafers is a great idea from Yasmin Khan; Yay for the Cheese Boutique; wild blueberries make the perfect topping; no better way to finish a festive July dinner; 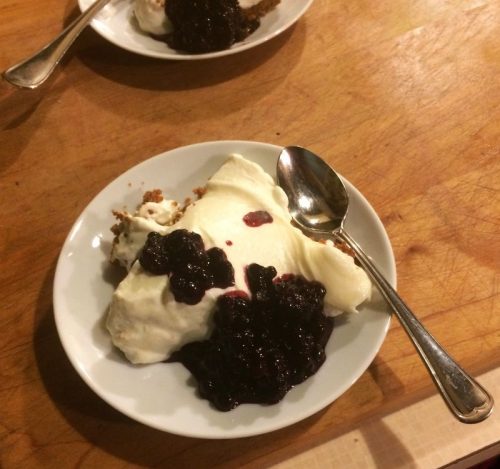 When we were discussing dessert for our festive July dinner, T mentioned that he wanted to make Greg’s cheesecake and drizzle it with wild blueberry topping.

What a great idea!

Greg served his insanely easy-to-make and insanely delicious cheesecake to us eons ago, and as a result, we’ve had (and used on several occasions) his recipe in an honoured place in our recipes binder since sometime in the late 1980s. Greg suggests using chocolate graham cracker crumbs for the bottom crust. We usually do that…. 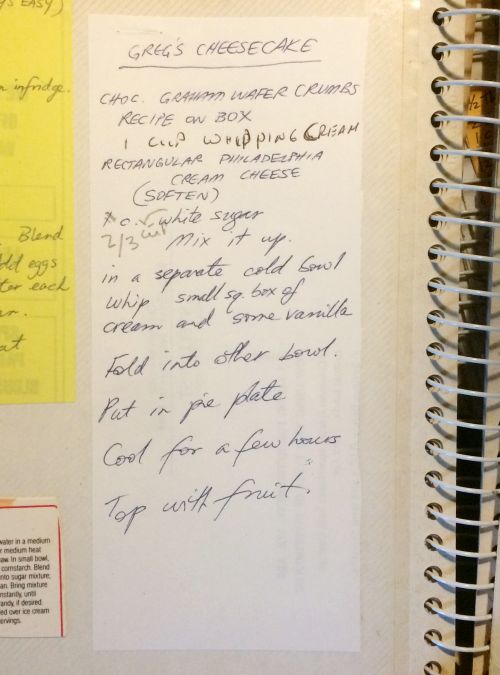 But we had just read Yasmin Khan’s lovely cookbook, “The Saffron Tales”:

There are specialist patisseries in every neighbourhood of Iran, selling an assortment of shirini, the Farsi term for a sweet baked good. These brightly lit shirini stores are a confectioner’s dream, smelling of warm vanilla sugar with a slight hint of sour fermenting yeast. Inside, row upon row of glass cabinets display a dazzling selection of cream puffs, saffron pastries, almond biscuits, fruit tarts, nut brittles, pistachio nougat and sticky baklava, all of which are sold in boxes by the kilo. […] Saffron, cardamom, cinnamon, nutmeg and cloves are the dominant spices used in Iranian shirini, along with the floral notes of rose water and orange blossom water. […] Because meals are traditionally finished with justt fresh fruit and tea, many of the cakes and tarts served in Iran for special occasions are interpretations of classic Western desserts. The recipes in this chapter reflect this approach, and celebrate the flavours and ingredients of Persian cuisin in familiar Western-style cakes and puddings.

Rhubarb is used in both savoury and sweet dishes in Iran and in this simple bake, the warming spices of ginger and cardamom really make it sing.

We had to try Yasmin Khan’s gingersnap crust on our cheesecake! (We would have made the rhubarb topping as well, but we don’t have rhubarb growing in our tiny garden and had missed the prime time for getting local rhubarb at the farmers’ markets.) 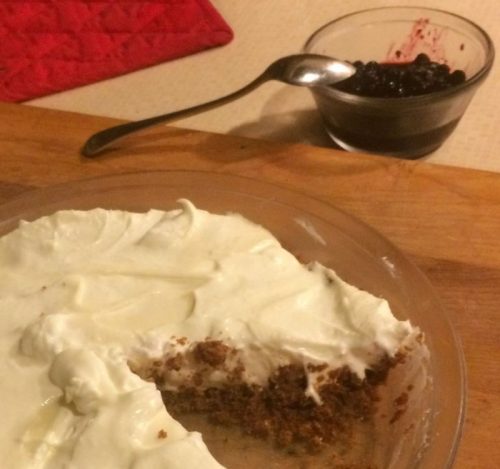 No-bake Cheese Cake on a crushed gingersnaps crust with wild blueberry topping
based on Greg I’s recipe for easy cheesecake, and Yasmin Khan’s gingersnap crust in her recipe for Rhubarb and Cardamom Cheesecake in “The Saffron Tales”

Cut into wedges (as best you can) and serve with a topping of wild blueberry compote. (Greg suggests topping simply with fresh fruit.)

As for Greg’s cheese cake measurements, he told us to use the “rectangular box” of cream cheese, and the “small square box” of whipping cream.

:: cookie crumb base Greg calls for using the recipe on the box of chocolate graham wafer crumbs box. Until we read Yasmin Khan’s book, we always used crushed chocolate wafers instead (we didn’t care what brand). However, crushed gingersnaps are even more thrilling that chocolate wafers. It’s my inclination to ALWAYS used gingersnaps now for the base of cheesecake. The gingersnaps we used are storebought, wafer-thin biscuits (Nyåkers). In spite of the fact that they contain artificial butter flavour, whatever that is (margarine??), they are delicious even on their own. We have since discovered another source of ginger biscuits that has no artificial flavours at all. They are equally delicious.

Yasmin Khan bakes her cookie crumb crust for 10 minutes at 400F before leaving to cool to room temperature before adding her traditional cheesecake filling (with eggs) on top of the crust and baking at 350F for about 45 minutes. We’ve found that it is entirely unnecessary to bake the crust. 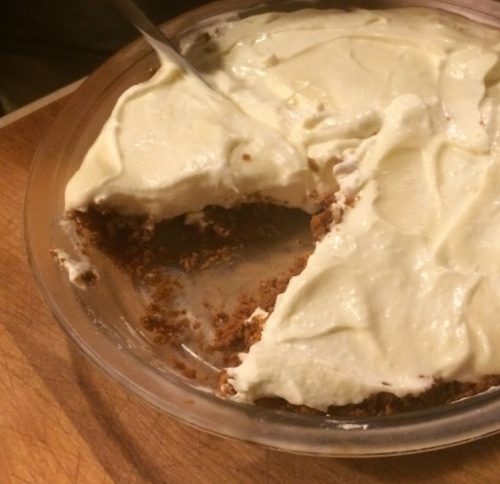 Shortly before this dinner, we took a trip to the Cheese Boutique to see what was in their wonderful “one for $13, or three for $10” fridge. We were very happy to get – for the price of one cheese – two beautiful rounds (10 cm wide, 75 cm tall) of perfectly ripe Saint-André, a triple cream cheese that is not unsimilar to Brie. We also got a giant block of Percorino Romano and another giant block of Stilton.

I STILL can’t remember who told us that the Saint Andre was a factory cheese. But who cares? It’s delicious!!

Saint-Andre is a brand of French triple creme cows milk cheese with a powdery white, bloomy skin of mold, in the form of a 200 g cylinder, 6 cm in diameter and 5 cm high. Originally developed and manufactured by the Soulie cheese factory in Villefranche-de-Rouergue, Aveyron, it is now produced in Vire, Calvados. […] The fat content of Saint-Andre is so exceptionally high about 75% it can make a white wine taste sour and metallic: a crust of baguette and a light beer or simply a slice of pear are suggested by the manufacturer as better complements.

Free Journal: Cheese stubs |
Saint-Andre cheese
Saint André is actually a modern cheese. Production of it started in the 1960s at the St-André Creamery in Villefranche de Rouerque, France (founded 1928.)

Cooks’ Info |
Saint André
The rind is covered with a velvety and powdery bloomy mold while the inside is ivory white in colour. The taste of the cheese is an intense version of the Brie, another famous French soft cheese.

High butter fat? Creamy? It was fabulous with wild yeast buns, some dried sour red cherries, and café au lait for breakfast! And so good for us….

But I’m getting distracted from the really thrilling thing that happened at the Cheese Boutique. Just as we left the shop, we realized we had forgotten to get ginger biscuits when we were at the supermarket buying staples (milk, butter, vinegar, etc.). It seemed like a no-brainer that the Cheese Boutique would have some fancy biscuits (including gingersnaps) for sale. Back inside we went. We were right. They did have fancy biscuits!

We were standing at the shelf, looking at various biscuits, when T picked up a box of gluten-free ginger biscuits. I immediately nixed them, knowing they would be insanely expensive. But suddenly, behind me, a voice came saying, “if you’re looking for gluten-free, we have lots of gluten-free biscuits over here”. I turned around (feeling a little guilty and hoping she hadn’t heard my ‘insanely expensive’ crack) and said, “Actually, we’re not looking for gluten-free. We love glutens and want as many as we can have. We’re looking for ginger snaps to crush for cheese cake.” Immediately, she reached onto the shelf and handed us a box of Nyakers ginger snaps (original). She said they make great crust for cheese cake.

As we were happily paying – without even asking the price – for the ginger snaps, the woman came to the cashier, carrying two more boxes of cookies, murmuring something like, “because you’re making cheesecake, you have to have these too”. And she handed them to us. Anna’s Limited Edition Toffee biscuits. Which meant that instead of paying $4 for one box, we paid $4 for three boxes!!

(The last time we were at our supermarket, we did check the cookies aisle. The President makes excellent ginger cookies for about half the price of Anna’s and Nyåkers’ biscuits. Also, the President uses butter to make his ginger biscuits, rather than vegetable oils that Anna’s uses – or worse, Nyåkers’ “artificial butter flavour”. Sorry, Anna, and Nyåkers, I’m afraid we’ll probably use President’s Choice biscuits from now on.) 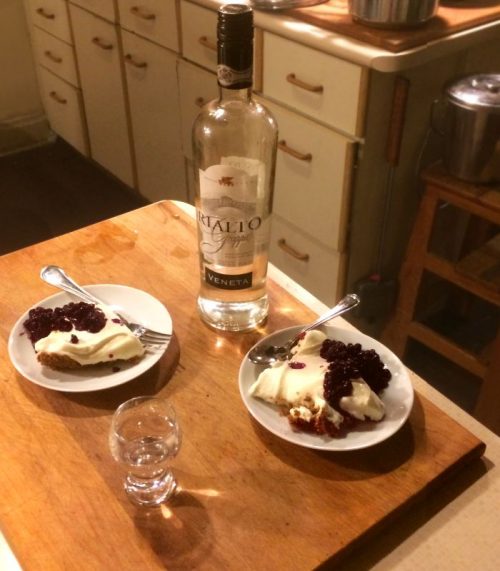 Because it was a festive occasion, we served Grappa too