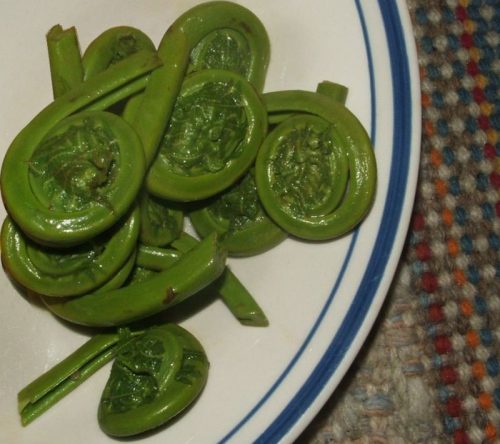 I love fiddleheads – the only thing wrong with them is that it is very very difficult to get the sand out. – me, blog from OUR kitchen, 100 Canadian Foods to Consume meme, October 2008

Last month, when I was buying eggs from our friends who live on a sheep farm north of the city, I was told there was a bonus for me. Along with 2 dozen gorgeous eggs, I was given a large bag of fiddleheads picked that morning. She reminded me, “There isn’t really any sand; just give them a good rinse before steaming them. They’re really good with butter and garlic!”

Oh yes! That’s right! I had forgotten that there would be no sand. And she is right. The fiddleheads that she and her husband gave us last time (in 2010) were beautifully firm, with zero sand. This time was exactly the same.

And they were delicious! Tasting of spring: newly green and delicate.

And there were enough fiddleheads for us two hogs to have them with four dinners!

The first night, we were serving the fiddleheads with oven-roasted sweet potato and biryani. 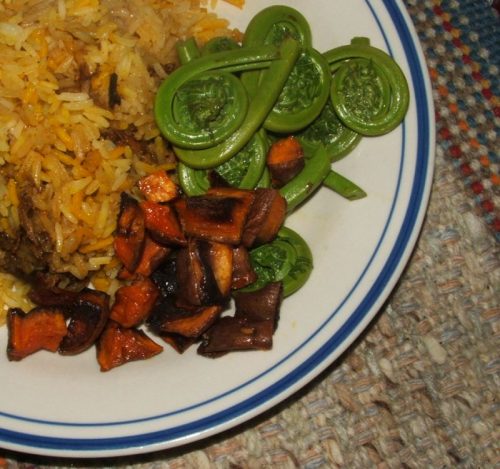 Ignoring J’s advice about adding garlic sauteed in butter, as well as the cautionary notes from various agencies, including Health Canada, we lightly steamed the fiddleheads and drizzled them with butter and a little lemon juice. We even tasted a little bit of one raw – it was tender and quite delicious, in a wild spring-like grassy way – neither of us was even remotely ill.

In fact, until all the fiddleheads were gone, we had completely forgotten that we were supposed to cook fiddleheads before eating them. It wasn’t until I was typing this up that I was reminded by several online articles.

As fiddlehead season kicks into gear, the Canadian Food Inspection Agency is warning consumers to be careful in preparing the curly green fern. […] The agency believes the most likely cause of a number of fiddlehead-related illnesses in the country is an unidentified natural toxin present in the plant.
The federal department’s website said people start to show symptoms 30 minutes to 12 hours after eating raw or undercooked fiddleheads. It said people report diarrhea, nausea, vomiting, abdominal cramps and headaches. People usually recover in a day.
The agency tells consumers to wash fresh fiddleheads in several changes of cold water, then […] steam them for 10 to 12 minutes. It says the water used for boiling or steaming fiddleheads should be discarded as it may contain the toxin.

– CBC News, Fiddling with fiddleheads may be dangerous, warns food agency 27 May 2005
Cleaning
• Using your fingers, remove as much of the brown papery husk on the fiddlehead as possible.
• Wash the fiddleheads in several changes of fresh, cold water to remove any residual husk or dirt.
Cooking
• Cook fiddleheads in a generous amount of boiling water for 15 minutes, or steam them for 10 to 12 minutes until tender. Discard the water used for boiling or steaming the fiddleheads.
• Cook fiddleheads before sautéing, frying, baking, or using them other foods like mousses and soups.

– Health Canada, Fiddlehead safety tips
Steaming
Bring a small amount of water to a boil preferably under a stainless-steel, vegetable steamer in a saucepan. Add clean fiddleheads, cleaned according to the steps above, and steam for 10-12 minutes with a lid covering the steamer and saucepan.
After boiling or steaming, serve at once with optional toppings or seasonings, such as melted butter, vinegar, olive oil, salt or pepper. Cooked and rapidly chilled fiddleheads can be also served as a salad with an onion and vinegar dressing.

UMaine Extension: Food Safety Facts, Bulletin #4198, Facts on Fiddleheads
[T]here are many reports out there about people getting poisoned as a result of eating these. All these reports come from those who have consumed fiddleheads that were purchased, not foraged for individual purposes. However this does not negate the fact that food safety is paramount. […] [A]lways be sure to never eat these raw or if they are undercooked.

Happily, The Wine Advocate has a slightly more reasonable approach, reducing the required cooking time to allow for fiddleheads that aren’t mush.

When it comes time to prepare fiddleheads, you should remove any stem longer than an inch or two and then rinse them in cold water to remove any dirt or grit. And though you might be tempted, never eat them raw. Fiddleheads should always be cooked for at least five minutes because even “safe” varieties can contain a small amount of toxins.
[…]
Fiddleheads are fairly nutritious, serving as a good source of iron, fiber, potassium, antioxidants and omega-3 fatty acids. And in terms of flavor, the taste of fiddleheads has been likened to a mix-and-match combination of asparagus, green beans, broccoli, artichokes and spinach depending on who you ask. When it comes to cooking, many suggest it be prepared in a method similar to one of its flavor relatives—simply so as not to overpower the delicate flavor of fiddleheads.

The second night, we steamed the fiddleheads (lightly again) and added onions sauteed in butter, and served them with oven-roasted potatoes and a chop. That was delicious too. 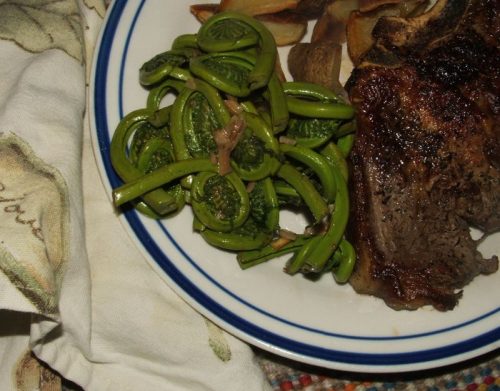 The third night, to go with oven-roasted eggplant and left-over biryani, we added garlic sauteed in butter to the fiddleheads – also delicious. 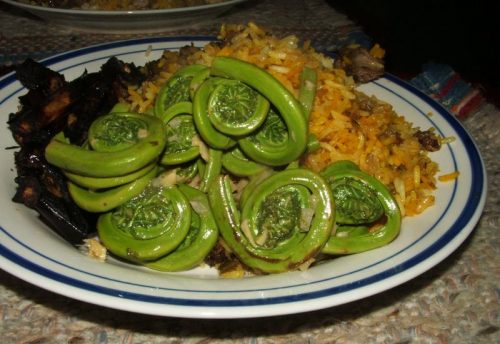 On the fourth night (dinner not pictured) we served the last of the fiddleheads with roast chicken and returned to garnishing with lemon juice and butter, because we both agreed that either garlic or onion almost overtook the lovely flavour of the fiddleheads.

Thank you, J and J, for bringing spring to our table!!